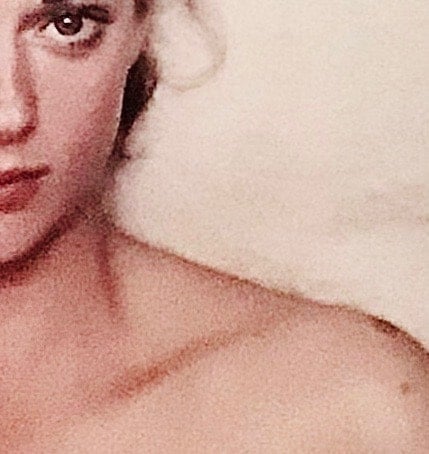 This time last year I found myself laying topless on a bed with laser beams dancing across my breasts. How strange, I remember thinking, to so cavalierly take my shirt off for so many different people after being married for over 20 years.

I can’t say I’d ever been terribly modest about my breasts. My hippie parents never told me that I couldn’t run around topless as a child like my older brother. I only became aware of my chest by being teased at summer camp. The first day of swimming I showed up wearing only a bathing suit bottom. I was probably only 5 or 6 and remember being baffled but not terribly upset by being laughed at. I thought “who cares? There is nothing to hide”!  I don’t remember how the rest played out but I’m sure the next day I wore a top. Later on at camp I remember being called a pirate’s dream because of my sunken chest. It never bothered me, my breasts have always been small, and even once they had developed, I remained unselfconscious about them.

When I was young and perky I rarely wore a bra. (Looking back at photographs, I now really wish I had.)  I’ve gone topless on beaches and may have entered a wet t-shirt contest or two during college spring break. I admit I even relished showing off the cleavage that came with breast feeding each of our four babies. All this is to say is that I’d never perseverated on my relationship with my breasts. Until just over a year ago, when I was diagnosed with breast cancer.

I lost my mother to breast cancer on October 18th, 1998 when I was seven months pregnant with our first child. We rolled a mobile ultrasound machine in to her hospital room so that she could hear the baby’s heartbeat before she passed away. If I were ever diagnosed with breast cancer myself, I thought, I would definitely get a double mastectomy. She had treated her breast cancer with a lumpectomy and radiation and died 6 years later. When it came down to my own course of treatment, I realized that it was not so easy to let them go. As my surgeon had cautioned, I realized how deeply emotionally attached to my breasts I actually was.

At 53 I was shocked by my diagnosis. I knew that I had to be diligent about my screening due to my mother’s history. She hadn’t been diagnosed until she was 69 years old. I thought I would have time before I really had to worry.

Three years ago my mammogram was normal. I called my physician when I received the letter afterwards stating that I had dense breast tissue, and that a breast MRI is a better way to detect breast cancer in dense breast tissue. She assured me not to worry. Our state had just passed a law where that letter had to be sent to all patients with dense breast tissue. Dense breasts are not uncommon in smaller breasted women like me. At my physical the following year I mentioned that once again I had received the same letter after my mammogram. We decided, that with my family history, I should get the MRI.

My first MRI indicated the need for a follow up in 6 months to track two small spots of concern. One of the reasons breast MRI is not more widely recommended is because of a high false positive rate due to its sensitivity. I was not worried. It wasn’t until 8 months later that I remembered to make the appointment for the follow up MRI. Sure enough one of the spots had doubled in size requiring a biopsy. To our great relief that biopsy came back negative. It was all a big false alarm and we were breathing easy. I still needed the lumpectomy to remove the growth since it could keep growing but there was no rush since it was benign.

We scheduled the lumpectomy after our family summer vacation. We took a two-week whirlwind trip through Scandinavia, hiking peaks and cruising through fjords. Since she would be doing surgery my breast surgeon suggested an ultrasound biopsy of the second small spot on my MRI that had not changed. It was too small and did not show up on the ultrasound. We had to do an MRI biopsy on it. When I got the call with the results I was not nervous at all, so when the surgeon told me that that smaller unchanged spot actually was breast cancer I was stunned.

Because I did not have the BRCA gene a mastectomy was not recommended. I still had school aged kids at home so decided on the less radical treatment of lumpectomy and radiation. I am grateful that my breast cancer was caught early, and that my state had mandated the letter about dense breast tissue be sent out. The surgery successfully removed the cancer and I was fortunate to have the amazing support of my husband and friends.

Lying on the table topless with laser beams dancing over my breasts a year ago seems like a distant memory with all that has changed in the world since. I felt good through my radiation treatment and continue to feel good while taking Tamoxifen. I have confidence in the research and improvements in treatment since my mother went through breast cancer 22 years ago. According to cancer.net the survival rate due to early detection had increased by 40% between 1989 and 2007. The key is early detection! October is Breast Cancer Awareness Month in the USA. To me it is also the month I lost my mother to breast cancer, the month I underwent radiation therapy for my own breast cancer, and the month to spread the word, and remind women of the importance of routine screening.