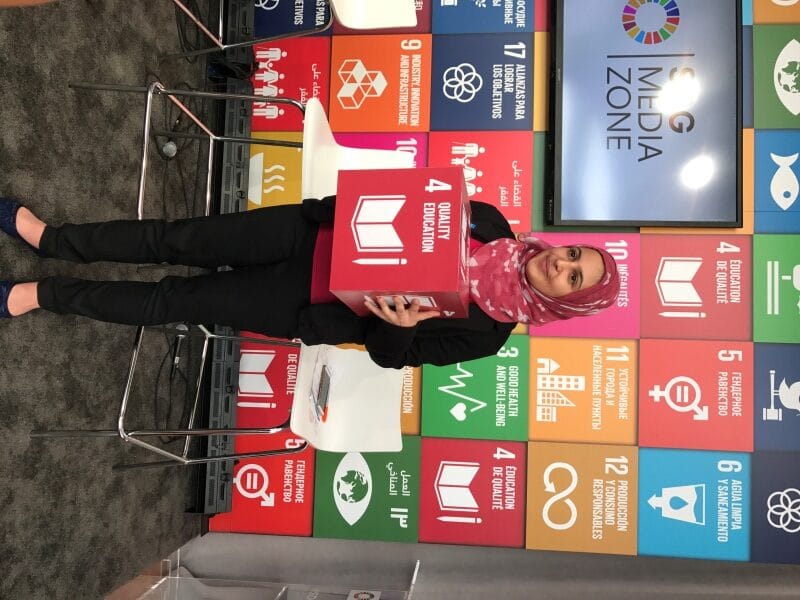 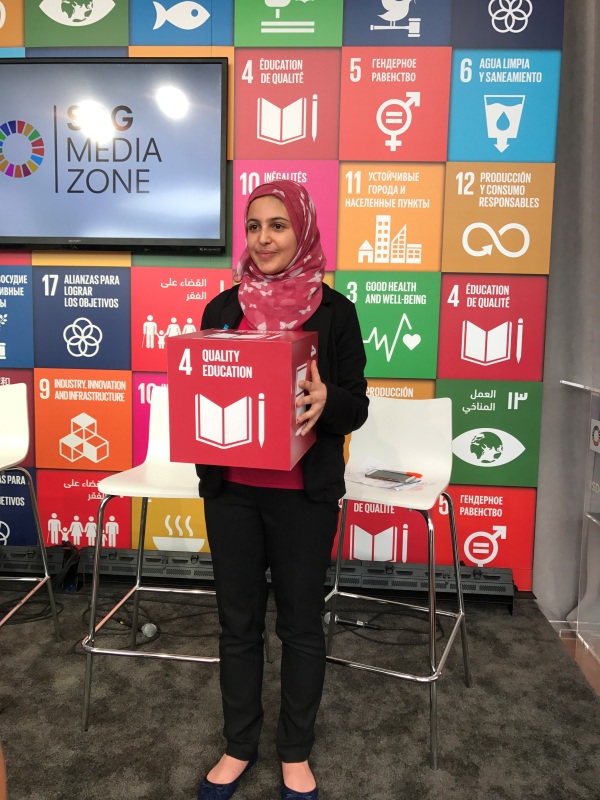 For the past three years, I have attended the Social Good Summit in September and have always been excited to hear speakers address issues that deal with SDG’(Sustainable Development Goals). This year’s speakers did not disappoint. In addition, I was invited to be a part of the SDG Media Zone during the UNGA (United Nations General Assembly) in the same week, where media influencers and high-level delegates from around the world came together to address the global problems facing us today.

With celebrities like Aasif Mandvi speaking on the fairness of media when covering politics and Whoopi Goldberg, whose involvement with the AIDS Foundation in collaboration with Quinn Tivey, Elizabeth Taylor’s grandson, there was no shortage of inspiring changemakers whose goal was to further the conversation of the SDG’s for #2030NOW; but of those that I heard, one speaker made the biggest impact on me.

Muzoon Almellehan is the youngest Syrian refugee who changed her unimaginable circumstances to one of inspiration. She was 14 when her life was upended and had to escape to Jordan with her family to escape the war. For most children, the thought of starting a new life in a different country, let alone a refugee camp, would be daunting, but for Muzoon, it was more than that; she had to leave the school that she considered her second home.

Facing the reality that she couldn’t go back to Syria, she decided to pursue the one thing that the war couldn’t take away from her: education. Relieved to find out that the refugee camps in Jordan offered education to children, she dedicated all her energy to continue her learning. It was during her stay at two refugee camps in Jordan that made her realize the impact she could make for her community. She used her voice to raise awareness of the importance of education for children, especially for girls. Muzoon knew too well that the fate of young girls was bleak since her community believed early marriage was the only way to protect girls. She made it her mission to convince organizations in the refugee camps that education was the way to break the cycle of poverty and traditions that threaten the safety and future of girls.

Her commitment to bringing SDG 4 (Education) to the forefront of the Social Good Summit speaks volumes. Muzoon is not content in spreading the value of educating girls only in her community, but to the rest of the world. It is her passion towards education that has earned her the distinction of being the youngest UNICEF Goodwill Ambassador.

While I was not a refugee, like Muzoon, my family came to the United States to escape a Philippine dictatorship when I was 10 years old. Before we left, I was lucky to have been taught English as my first language by two aunts who were teachers before the national language, Tagalog. Like Muzoon, I had to leave my home, friends, and school and start over. My family had to rebuild our lives in a different country, but the one thing that was never compromised was my education. I didn’t realize how much I would be grateful for learning English at an early age because it made me feel like I belonged, even though I looked different.

My education has allowed me to pursue a career that I love, which may not have happened had we not left the Philippines. Now, as a Mom of an eighteen-year-old woman, I am so grateful that she will not have to fight to get an education and pursue her dreams, unlike girls in countries whose education is suppressed, thus affecting their future.

Muzoon’s commitment to implement SDG 4 (Education) for everyone is inspiring and should be heeded as a wake-up call. Education makes it possible for anyone to dream big for themselves and their communities. Her parting words say it best: “Even if we are young, even if we have challenges in our lives, we really can make a change. Yes, life is difficult, yes we face difficulties like war, conflict, poverty, but when we believe in ourselves, and when we believe that we are strong enough to make a change, we will make this change and we can actually make a difference in this world. No matter who we are, no matter where we are and no matter how old we are. Just remember that we are all humans, and at the end, we have the same feelings and same rights. So let’s be one and let’s come together for making our world much better”.

I, for one, am ready to join her mission of bringing education to every single person.