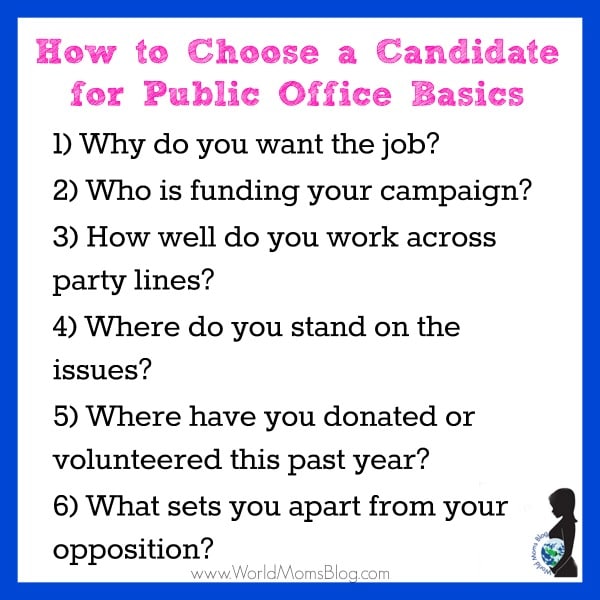 USA: How to Choose a Candidate for Public Office 101

“I know nothing about politics.”

“The person who I wanted to run didn’t make my party’s ticket, so I’m not voting.”

“My one vote won’t make a difference!”

These are quotes that I’ve heard too many times by intelligent women. Are you surprised to hear them, or perhaps you have heard them, too? Maybe, like me, you have even said one in the past. I understand.

Politics gave me a headache when I turned 18 and was first eligible to vote. I asked friends for advice on who they were voting for. I often felt like it seemed to be something that other people just knew more about. I had stances on issues, but wasn’t sure which candidates would vote for what I supported. I really didn’t know what to ask the candidates or how to engage. I felt insecure about the whole thing. That was way back then.

It didn’t take long until I realized that politics wasn’t something I should be running from, but rather, running toward. Over the years I have gone to Capital Hill to lobby Congress; picked up the phone to call the offices of my Governor, Senators and Representatives; sent e-mails; and tweeted to let them know what issues I wanted them to vote on. Have I ever voted outside my party? Yes. Remember, it’s all about the job interview and who the best candidate is to support the issues that you care about most.

With election day around the corner in the U.S., I’ve started a list of general questions that can be tailored based on the issues that you support.

Every candidate should have a quick “elevator speech” about why they are running. Hear them out.

2) Who is funding your campaign?

Knowing what organization or people a candidate is accepting campaign funds from is important. Look out for candidates who may choose to act based on their top donors’ best interests. And see if those interests are aligned with what you value. 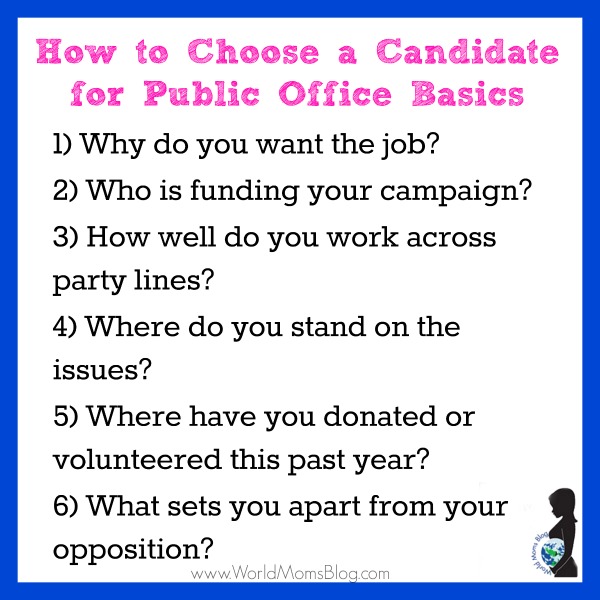 3) How well do you work across party lines?

Asking a candidate to explain a time in which they helped achieve success when working across party lines will tell you a little about how comfortable they seem working with people who think differently from them. It’s important that they work to get things done for the best interest of the people, not just in the best interest of their party.

4) Where do you stand on the issues?

This is homework you, yes YOU, have to do. Figure out the top 5 issues most important to you. What do you want to see changed, supported or kept in place? Next, ask or find out where the candidates stand on those issues. Here are some of mine:

How do you stand on the national/local environment? Can you provide examples of when you sought change to keep our environment clean or protected?

How do you stand on issues concerning women and girls?

Can you provide some examples of when and how you championed equality efforts?

What plans do you have to help disadvantaged children?

What is your track record on supporting global health programs?

5) What charitable organizations have you volunteered for or donated to this calendar year?

I’d like to know this about a candidate. It helps me get to know where their interests and passions lie.

6) What sets you apart from the other candidates for this position?

This is an important question. Your candidate knows what makes them different, so hear them out. Ask for working examples of how they stand apart. But remember, when they tell you that their opposition stands or doesn’t stand for x, y and z, follow up, and fact check.

Help me add to the list! What would you ask?

And, tell us the issues that you value most when voting!

This is an original post to World Moms Blog by Founder and CEO, Jennifer Burden.

Related post: Have you read Mama B’s post about the first time women in Saudi Arabia will be voting in December 2015?