Like many twenty-first century parents, I have ongoing battles with my kids about “screen time.”  They think they don’t have enough of it; I think that if they stare any longer into a computer screen, they will start bleeding from the eyeballs.  My thirteen-year old son P. generally spends more time with computer games than he does with Facebook, but when the always simmering tensions between Israel and Palestine exploded this summer, his Facebook page became a much more interesting, and complicated place that–surprisingly–ended up teaching us a great deal.

My son’s Facebook friends are pretty evenly split between his Manhattan friends and his Abu Dhabi friends, and they usually all post the same sorts of things: video clips from soccer games, Vines of stupid pet tricks, grimacing selfies, ridiculous quizzes.   You wouldn’t know, to look at his page, who was from which city, other than perhaps from their sports-team affiliations.

Some of P’s New York friends are Jewish and some are not; some of his Abu Dhabi friends are Arabs, but most are not. The people who populate his page hail from almost every continent, regardless of the place they now call home. But pretty consistently, it seemed, the New York friends posted on behalf of Israel and the Abu Dhabi crew posted on behalf of Palestine.   As each wave of articles washed across his page, P would first think one thing and then another: like all of us, he wanted clarity and answers. He wanted a clear apportioning of blame and swift justice; he wanted resolution.

At thirteen, my son and his friends are none of them too far removed from the realm of childhood, where everything is clear-cut, like in comic books and fairy tales. In those worlds, there are good guys and bad guys, heroes and villains, and usually the good guys win.  It’s one of the hardest things about growing up, isn’t it, the realization that life doesn’t arrange itself into such tidy categories?

This summer is the first time that P has had to think about what it means to have a religious identity.  When we lived in New York, all he saw is that some of his Jewish got eight days of Hanukah gifts while he only got one measly day of Christmas loot. This year P tried a few days of Ramadan fasting (a sort of Ramadan lite, in that he ate breakfast at the regular time but then ate nothing until after sunset) but all he seems to have learned is that being really hungry makes food taste better.  As politics heated up on his page, however, he started to think more carefully about religion, and to consider not only the difference between religions but also their similarities.

The clashing views that appeared in P’s facebook feed led him to many conversations: why was Israel created and by whom, why did Israel have such strong US support, who drew the embattled boundaries and why, what is Hamas, who lived in Israel before it was “Israel?” The questions went on and on: how could Hamas use civilians as shields, how could Israel fire into supposedly protected spaces like schools and hospitals, and how could people kill in the name of religions supposedly dedicated to love and compassion? I found myself trying to unspool sixty years—a century—of politics and greed, from World War II backwards to 19th century English imperialism, and even further.   I showed him this article, and this one, and many more.  The more I talked, the more I realized that I was trying to explain the unexplainable: how does anyone, in any war, reach a point where violence against children gets, if not justified, then somehow discounted in the service of larger goals?

As the war ground on, P’s friends on both sides stopped posting and his Facebook page returned to its standard scroll of shark attacks and kitten pictures. But P kept scanning the newspapers, looking for the latest news about cease-fires—and the cessation of cease-fires.  He asked me recently if I thought peace might be possible.  I told him I wasn’t sure, which is a pretty grim message to give a thirteen-year old.

I don’t know when, or if, a livable resolution can be found for the conflict in Israel and Gaza—as my own explanations to my son showed me, the roots of the conflict run in tangled  webs far below the surface of the present moment.   What his Facebook page taught me, however, is that even if we ourselves aren’t in physical danger, the war between Israel and Palestine isn’t just their problem, it’s ours, as well. 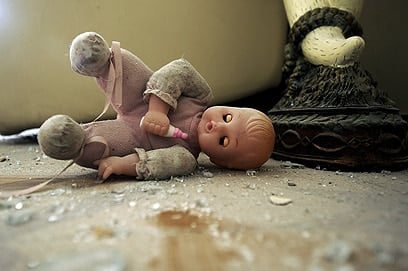 ISRAEL: Far From The End — Coping with the Missiles Attacks in the South 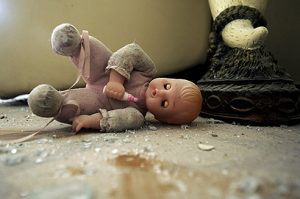 I’m feeding the baby, and my older son is playing outside. I hesitate for a second, then summon him. You can continue playing outside, I explain in a composed voice, but promise me, the minute you hear the siren you come in. OK?

He smiles at me, makes the promise, don’t worry mommy. Calms me down. For a second I wonder if our roles might be reversed.

I start folding the clothing. What should I take? This horrible weather. November and still hot. Need to plan for any type of weather. And my daughter is being toilet trained. Need lots of extra clothes.

“What’s taking you so long? You don’t understand how serious this is, do you?”

Not really. More serious than what it’s been until now? We’ve been living with the missiles for years, even though these last months have been crazy.

We don’t have a proper bomb shelter. We can’t take a four-month-old baby to a public shelter. We can’t stay in rocket range. Then I hear the explosions. Though distant, their impact is felt. So close my husband brings the children in the house. “Stay here,” he commands, “until we finish loading the car. The sirens are going to start soon.”