We are compelled to action.  One year after President Donald Trump took office in 2017, the women who protested his inauguration in the United States still hadn’t forgotten a thing. In January of 2018 we took to the streets for a second time to lift our voices together after living through a year of pretty much what we expected when Trump took office. We accurately predicted that protections for most vulnerable Americans (people in poverty, immigrants, disabled persons, and children to name a few) would be under attack. Some foresaw that we might hear hate-filled vulgarities coming from the president, but I think few expected they would be so frequent. I knew that varieties of racist, anti-Semitic, homophobic, Islam-phobic, xenophobic hate crimes would rise, but I naively never thought we’d see white nationalists openly chanting Nazi slogans and marching with flaming torches in the U.S.A.

Yet last year saw a positive change as people banded together to support each other. The “Me, Too” movement showed the world through social media how common it is for women to experience sexual harassment and/or abuse. Danica Roem became the first transgender candidate elected to a U.S. state legislature through a smart, local, issue-based campaign in Virginia. We saw judges push back against attempts to ban Muslims from entering our country.

I believe all of these events – the good and the bad – resulted in the energy of the marchers being both undiminished and better organized as we rallied around the theme of “March, Act, Vote!” While the enthusiasm of the women around me in St. Louis was still strong, I sensed a difference in tone this time around. Last year, everywhere I looked (including in the mirror) there were women attending their first major protests ever. Their giddy energy was palpable and contagious. Just about everyone I knew who stayed at home in St. Louis knew at least one person who was flying out to D.C. to protest the inauguration. A feeling of novelty and joy in the event came with the solidarity of so many women expressing their disappointment, anxiety, and downright fear about what the future would hold with a confessed sexual predator like Donald Trump in the White House. It was a transformation of epic proportions.

This year, the marchers around me were just as enthusiastic, but instead of novelty, I sensed an overall air of resolve. Snippets of conversations around me revealed that many marchers had not been idle in the last year. Those involved in Black Lives Matter (a movement to stand against violence and systemic racism towards black people) carried their signs as seasoned veterans after months of tensions with the St. Louis Police Department. Organized advocacy groups like the League of Women Voters and Moms Demand Action for Gunsense in America were visibly out to harness this precious protest energy and direct it into registering more voters and taking more actions beyond the event. For me, this was incredibly heartening. My two big fears in 2017 were that all of the energy of mass protests would blow away in the wind without organization OR that the constant shenanigans from the White House would eventually wear down everyone to the point that people were simply accepting a new and horrible normal.

Did 2017 wear us down? Somewhat. Over and over, I hear the word “demoralizing” from my friends, colleagues, and group leaders to describe the past year. But an event highlighting positivity, like the Women’s March in January, goes far to beat back the darkness. An environment like that allows a space for us to draw energy from each other. The night before the march, Rabbi Andrea Goldstein of Shaare Emeth Congregation offered these words in her sermon:

“Ever look toward one another. Look for each other and find there – in community – comfort and inspiration in the collective power and strength that we have together to create the world we long to see. The world we know that God is waiting for. The world we owe our children.” The night before the march, she urged us to: “Look, look, look, look…look around. It will be the day we yearn for. Not soon maybe, but it will be.”

I chose to participate in the second Women’s March, but skip the speakers in favor of getting my daughters to their Saturday activities. As I was leaving on the train, I met a woman who was doing exactly the opposite…she skipped the march, but was headed in to hear the speakers. I asked if she wanted to take my sign that said, “Women’s Rights Are Human Rights,” with her. She enthusiastically agreed and as she headed off downtown, I thought about how in that brief interaction with a stranger, two women supported each other to literally carry our message farther. Maybe that’s the way it has to be in real life for moms who are changing the world. We carry the banners for a time and when we need to step back to tend to our kids, we lend our support to those who will carry them for us until we can come back. 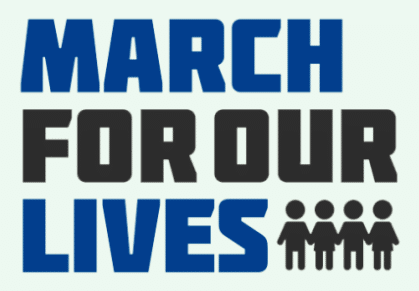 On March 24th protesters will once again be out in force in Washington, DC as they participate in the March For Our Lives. Spearheaded by our country’s youth, the march on Washington DC demands that the lives of our children take priority over guns and that legislators ensure that the epidemic of mass shootings in our country be put to an end.