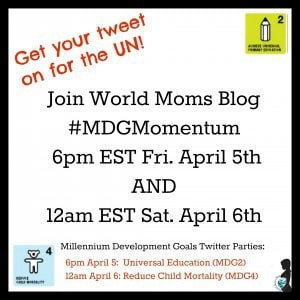 The chatter on twitter is already taking off in support of 1000 days left until the 2015 target to achieve the UN’s Millennium Development Goals (MDGs), a rally beginning today, April 5th.

According to the Millenium 1000 website, “On that day, a community of individuals, organizations, and institutions will come together to celebrate successes to date, reinvigorate discussion on the MDGs themselves, and begin to advance a post-2015 development framework that builds on #MDGmomentum. Join the community and be a part of the 1,000-minute worldwide rally on April 5th!”

The goals are as follows: