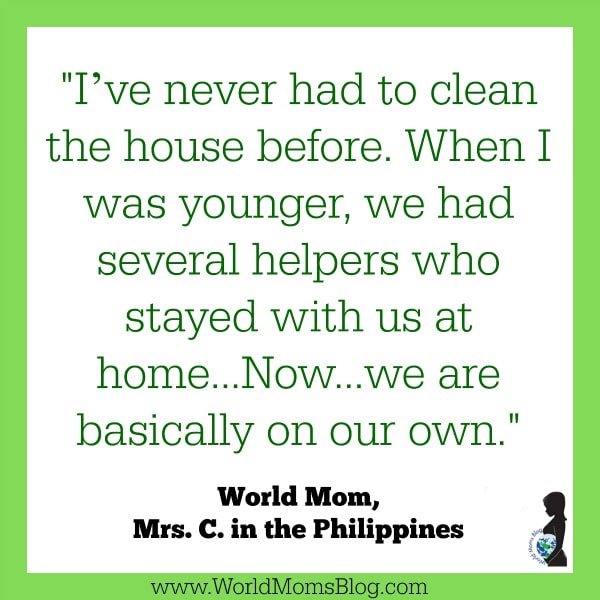 PHILIPPINES: A Mother Moves Out of Her Parents’ House

Our family of three recently started adapting a new normal.

We’ve finally moved in to a home of our own, something that my husband and I have dreamed of doing ever since we started on our life journey together. Here, in the Philippines, we’ve been living with family members since we were married.

To see “our home” become a reality fills us both with so much joy. It also gives us far more responsibilities than we have ever had to take on. Of course, we anticipated this, but you never really know what things will be like until you actually find yourself there, right? 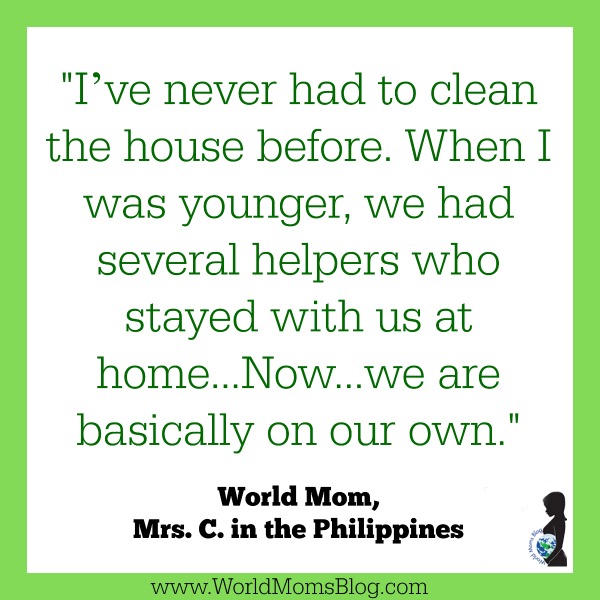 Mr. C works full time, which means that the bulk of the financial responsibilities fall on his lap. I, on the other hand, am in charge of keeping house, and turning this place into a happy home. Our son’s job is to fill our space, and our hearts, with happiness and love. He is also being taught how to do chores that he can manage at his age.

It’s been four months since we moved, and I feel that we are all doing well, so far.

Of course, it goes without saying that there have been times over the last four months where it felt like we were drowning. Or at least, I felt like I was drowning.

Managing an entire household, no matter how large or small, can be overwhelming. It’s super overwhelming for me, in particular. See, our current setup is different from what I grew up with.

I’ve never had to clean the house before. When I was younger, we had several helpers who stayed with us at home. My mom took in working students, and there were at least three of them staying with us at any given time. They helped with the daily chores, which meant that my siblings and I didn’t have to.

After I became a mom, I slowly started learning how to do these household chores on my own, from cooking and cleaning to doing the laundry. I also learned how to drive, so that I could start running errands. But because we were still living in my parents’ house, it was okay if things fell through the cracks once in a while. There was someone in that household who could help me do the things that I needed to do.

Now, in our new home, we are basically on our own. No helpers, by choice!

The three of us each have to pull our own weight around the house. It’s tough, but it’s also very fulfilling. I wish I could say that I have fallen nicely into a Pinterest-worthy routine, but the truth is that I have not. The reality is that, as I type away, I have two weeks’ worth of laundry sitting in the trunk of my car, waiting to be taken to the laundromat. There are also dirty dishes in the sink, and fallen leaves in the back patio and garage.

That’s okay. Yes, it is. See, the one important lesson I’ve learned as a new homemaker is this: If you want to keep your sanity, do not sweat the small stuff. 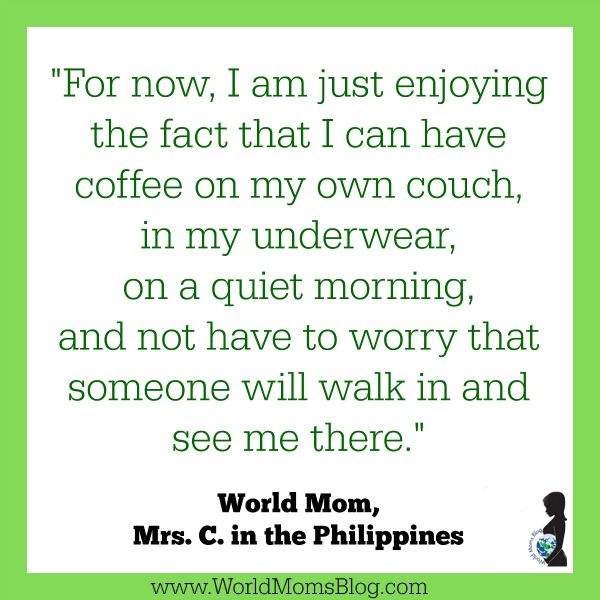 These things will get done. It may take longer than you had expected, but that doesn’t mean it will never happen. I know that I will eventually get the hang of all of this. I will soon learn to do laundry on a regular basis. I will figure out an efficient way to clean the bathrooms (which, I don’t do just yet, by the way, my husband does the cleaning. Thank God for him.) I will find a routine that works, and I will manage this household like a pro. Soon.

For now, I am just enjoying the fact that I can have coffee on my own couch, in my underwear, on a quiet morning, and not have to worry that someone will walk in and see me there. This family lives in a full house no more, and I do not sweat the small stuff.

What are your daily routines like, and how you manage to do everything you set out to do? Do you have helpers in your home? 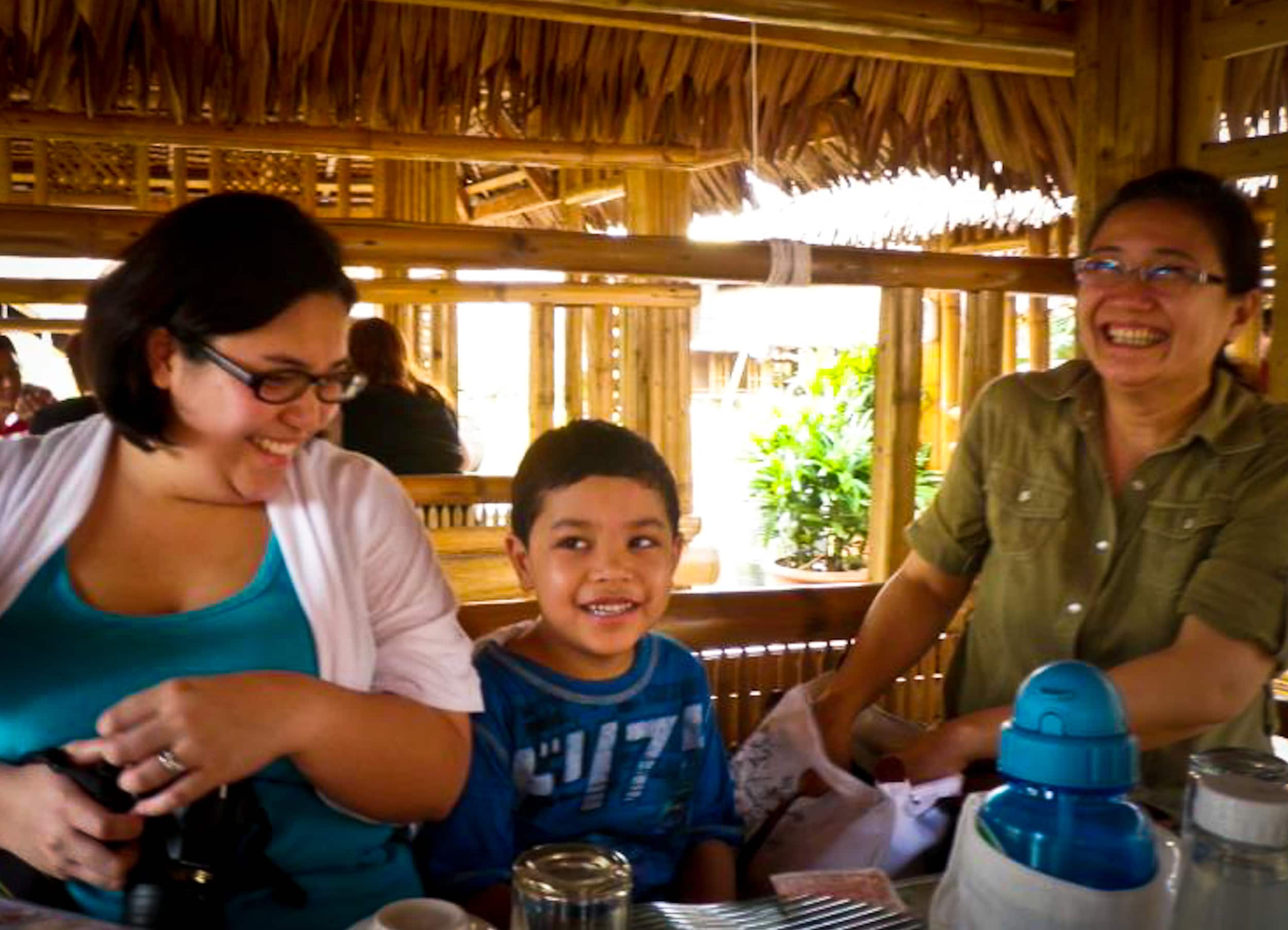 PHILIPPINES: Two Moms and A Baby 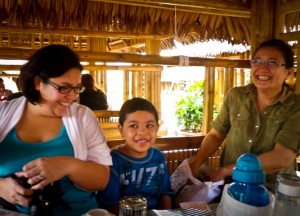 I grew up without a nanny. Here in the Philippines, a family with small kids without a nanny trailing after them is a rare sight. My mom, who is a housewife, was relatively young when she gave birth to me, so she was more than capable of raising me on her own. A couple of months after my first birthday my brother was born, and so my mom had two of us to care for. She continued to do this all on her own, without the help of a nanny.

Since I grew up solely under the care of my mother, I was determined not to leave any of my children with a nanny once I had my own.

It seemed simple enough when I was young and carefree. Then my son happened. At the time, my husband (who was still my boyfriend back then) and I were still in college. We had no steady jobs and no home of our own. And so it was decided that we would live with my parents. It was an ideal arrangement since my mom would be home and ready and able to lend a hand, answer any questions, or step in when I’d be too tired to function.

Throughout my pregnancy until my son’s first birthday, my mom and I worked in tandem caring for him every day. As if I couldn’t get any luckier, my husband has always been very hands-on with our child. Yes, he gave him a bath and changed his diapers, fed him and played with him. Name it, my husband’s done it. END_OF_DOCUMENT_TOKEN_TO_BE_REPLACED