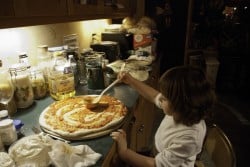 NEW ZEALAND: Fend For Yourself Fridays 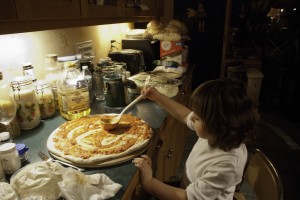 It began out of exasperation. Due to the logistics of Craig walking in the door at 5:45 pm and the smallest boy heading to bed at 6:30 pm, I’ve been cooking evening meals for the past few years. Craig is also allergic to cooking vegetables: something my mothering bones cannot manage with three very active boys in the house.

Then weekend meals somehow became my domain as well. Cooking on the weekend is not so bad: there’s more time to get my act together and fewer things to fit in before bedtime. I can create and extend my culinary expertise in ways that torment as much as they thrill.

I was pretty fed-up, though, at having to create reasonably healthy and reasonably quick meals every night of the week. So I invented Fend For Yourself Fridays as an attempt to cut down on my workload. And the dishes. And the grocery shopping. And my stress levels. END_OF_DOCUMENT_TOKEN_TO_BE_REPLACED 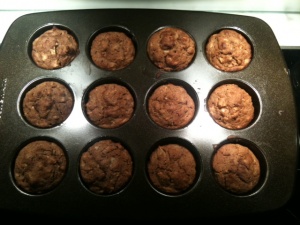 I should preface this by saying I am not usually a baker. Don’t get me wrong, I love to cook almost everything, but I didn’t grow up in a home that always had baked goods, so I was just not accustomed to it.

Then, a few years ago, I decided to try to bake muffins as a rainy day activity for my 2-year old son and I. They were super easy, healthy and delicious. I found that most of the recipes were similar, just substituting different fruit from one to the other.

My son went apple picking with his class a few months ago. What a wonderful fun, fall activity and a great way to spend a day, but I found myself holding a rather large bag of apples.

“What do you want to do with all of these apples?” I asked. “You can only use them in my apple cinnamon oatmeal, Maman”. Somehow, we were supposed to manage to keep these apples from going bad, and only use one a day….that’s not what I had on my mind. So we made muffins 🙂 END_OF_DOCUMENT_TOKEN_TO_BE_REPLACED