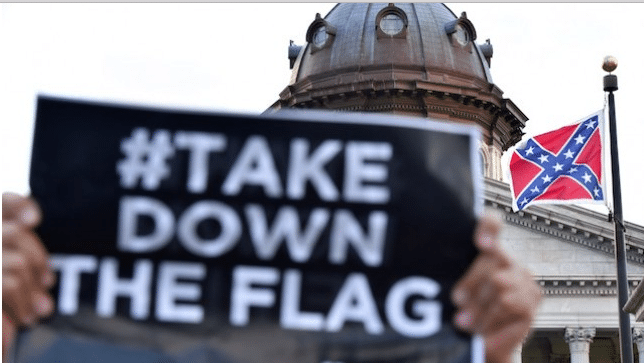 SPECIAL REPORT: An American Mom, a Flag, and the Charleston Terrorist Attack 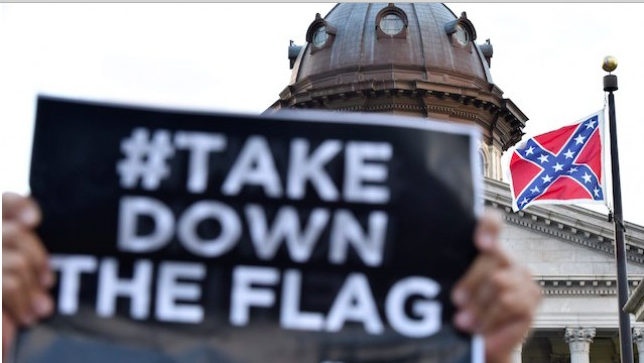 On June 17th, 2015, nine lives were suddenly lost in Charleston, South Carolina in the USA, when a man joined a prayer group in a church and opened fire.  Today, on the blog, we carry the passionate words of a mother from South Carolina, Yolanda M. McCloud of “Lesser Known Feats of Awesomeness“, to tell the story…

There are no words that can describe the sorrow and despair that has been felt around my state and this nation in the past several weeks. June 17th will forever be emblazoned on our brains as the day when one man, one gun, one mission, walked into a church, not just any church, Mother Emanuel AME, one of the South’s most historically black churches, and changed nine families forever. One man, one failed mission, one gun, nine people.

As I reflect on this, I have said in the weeks following that this type of act just does not happen in South Carolina, let alone in a church. What type of monster walks into a church, sits through Bible study, and then shoots the people he has sat around with for an hour? Who does that to anyone? As we embark on the months ahead, I am saddened by the display of hatred that has taken place following the dreadful day.

Charleston has shown the world how to weep for the lost, but the rest of our State and country has become unraveled at the seams embattled in the same argument, over a flag.

A flag, the center of the unrest at this moment, not the nine lives that were doing God’s work by worshipping and learning his word and the principles for which Jesus died for. No, a scrap of cloth that was created out of hate. That is what society has made the central conversation. And now, it feels more like we are back in the 1960’s with the burning of black churches, too.

The flag issue seems to be the core of the unrest and the destruction of houses of worship around the South. The creator of this flag, William T. Thompson called this flag the “White Man’s Flag” and said that “As a people we are fighting to maintain the heaven-ordained supremacy of the white man over the inferior or colored race; a white flag would thus be emblematic of our cause…As a national emblem, it is significant of our higher cause, the cause of a superior race, and a higher civilization contending against ignorance, infidelity, and barbarism.” Supremacy, white man, and colored race…heritage.

The debate over heritage and the cause of a war long by gone, a war that was fought so that men and women in the South could keep their slaves, human beings that they owned like cattle, should not be happening today.

A scrap of cloth that now the governor of South Carolina and the governing body has found the courage to say, “enough is enough,” and remove it in honor of the Emanuel 9. I am honored that I was able to see it come down on July 10th, 2015 and pray that it never graces its perch again.

Now this scrap of cloth has long been used as a tool of hate and is being revered by many as a large part of their heritage, citing that the Civil War was fought over state’s rights. In 1962, Senator Strom Thurmond stood in front of Congress to ask for more money for schools to stay segregated and the flag was hoisted to the State House dome and stayed there as rebellion against the civil rights movement. It is being seen to many as a national treasure.

As I sit and watch friends and others debate the cause of the Civil War and the creation of this flag, they talk about how their heritage is wrapped up and tied in a scrap of cloth.
And I begin to wonder, what if instead of black people, slaves bore the shade of skin like those supporting the confederate flag? Would there still be the debate over heritage?

I was born and raised in the South. I grew up knowing that people with my complexion were viewed as “lesser than” because we are darker than my lighter complexioned brothers and sisters.

I grew up knowing that there used to be bathrooms, water fountains, entrances for blacks and they weren’t allowed to use property or doors marked “whites only.” That blacks and whites went to separate schools and the words “separate but equal” were often used when things were anything but. We are aware more than ever that this flag is used as a weapon of supremacy over my race and the race of many others.

We are living in dangerous times. Where is the respect that so many people of color protested, marched, sat-in and risked their lives to achieve in our country’s history? How and why do we find ourselves unsafe again through such a hateful act just because of the color of our skin?

We are living in times where people do not seem to care for life and respect each other after all the civil rights progress that has been made since the 1960s. People are hurling hurtful, unintelligent statements about race on social media for many to see. I see it.

We are living in times where church is no longer sacred. When I see the images of black churches being burned to the ground, it saddens me further because those churches, they are all of our churches no matter our denomination, no matter our race, no matter our gender. They are all God’s House, and we are all welcome. To see them go up in flames is sad because once again, God’s House is not sacred. Our country was founded on the principles of freedom of religion.

If a person is different, meaning if they are not equal to a person in ethnicity, finances, or educational background, then they are less. This extends far beyond “white privilege”. This is the message I am receiving. The message I, and so many others, are feeling.

Churches can be rebuilt, flags can be removed, but life cannot be restored. And as people weigh in on both sides of this debate, I think what gets lost is that children lost their parents, families lost their aunts, uncles, and grandparents. Nine lives lost, one of those lives I knew and applauded and appreciated.

I ask, How many more lives do we have to lose to violence because my skin doesn’t look like yours?”

I hope that my home state, the great State of South Carolina, will remember this day and the removal of the flag and continue to send a message that hate is no longer allowed.

It shouldn’t be about culture, heritage, or being white or black. It should be about people. I ask you to empathize. It’s about the fact that Mother Emanuel could have been the Catholic Church up the street, could have been Temple, and could have been any mosque around the corner. It could have happened in North Carolina, Georgia, New York, or Maine. Your church, my church, from Greeleyville, South Carolina to the State of Tennessee and beyond, the rubble that once was a house of worship could have been made anywhere. The hate must stop.

We lift their families up in prayer, and we remind the world that greatness was lost because of one man, one gun, one failed mission, and nine families and a nation are forever changed.

This is an original guest post to World Moms Blog by Yolanda M. Gordon of South Carolina, USA. You can find her on her blog, “Lesser Known Feats of Awesomeness.”