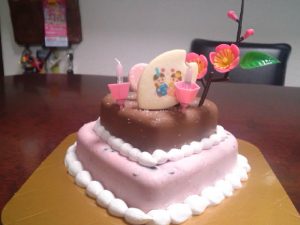 I think that’s holds true wherever you might find yourself in the world, but perhaps it is especially true here in Japan, where women have to deal with a well-established patriarchy as well as facing pressure from the older women in their lives to stay home, stay quiet, stay under control.

Perhaps it is ironic and surprising to some, to find that in this corner of East Asia, where women are still not allowed into Sumo rings for fear of “contaminating” sacred ground, there is a day set aside to celebrate the girls.

On March 3rd, families rich and poor, pause to pray for the health and happiness of their female children. In Japanese, this day is called Hina Matsuri, which literally translates as “Princess Festival.” Most English sources refer to it as “Girls Day” or “Doll Festival.”

When a female child is born, during her first year the family will purchase an elaborate set of dolls representing the traditional imperial court. No expense is spared, as it is believed the dolls will take her place in the event of natural disaster and will help protect her from sickness. Many families take pride in procuring a seven-level set, complete with the Empress and Emperor in many-layered kimono, the Empress’s attendants, musicians, and various objects found in the royal court. For others, space is a factor, but not to worry! Three tier sets and one tier sets are also popular. END_OF_DOCUMENT_TOKEN_TO_BE_REPLACED