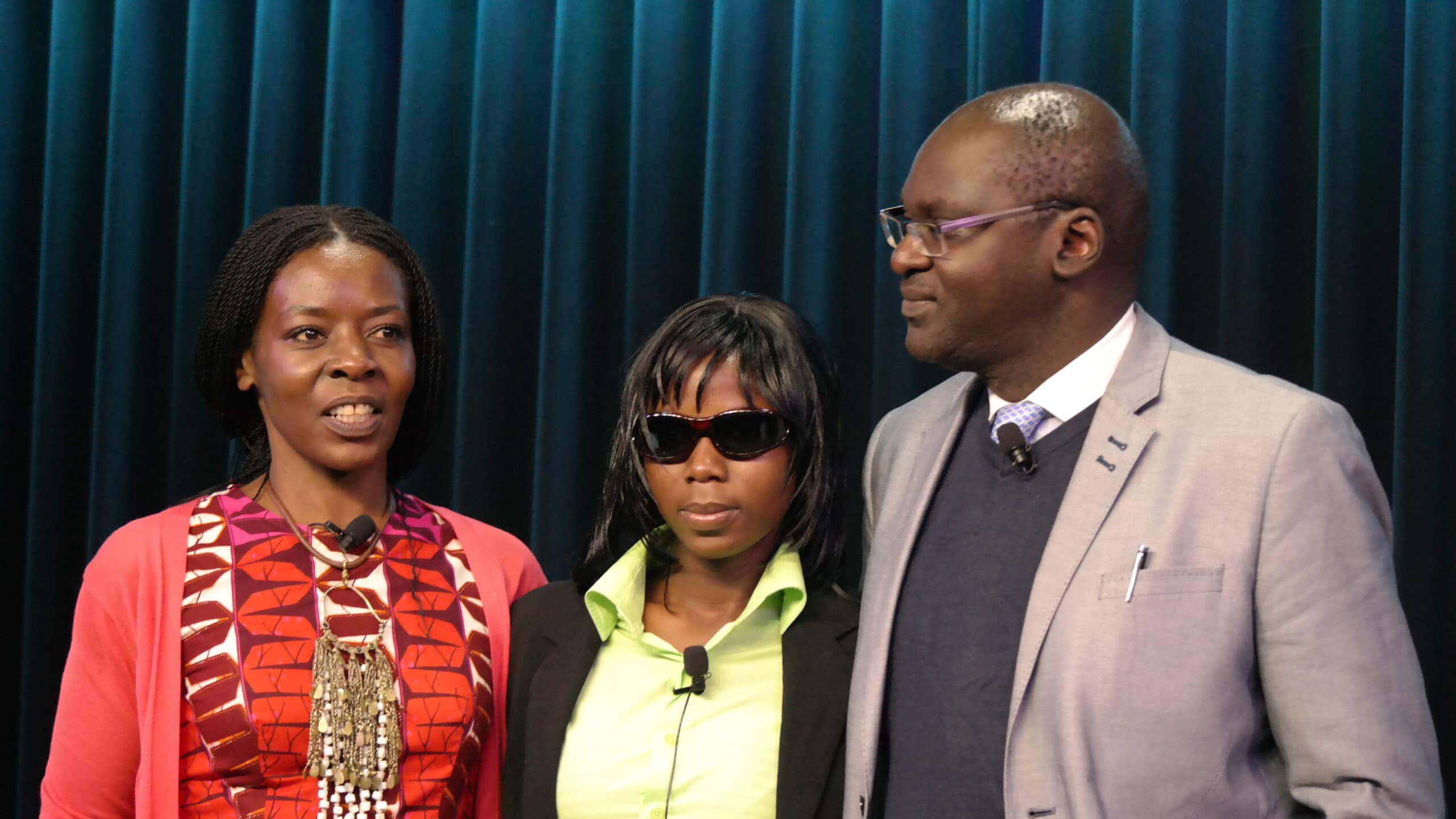 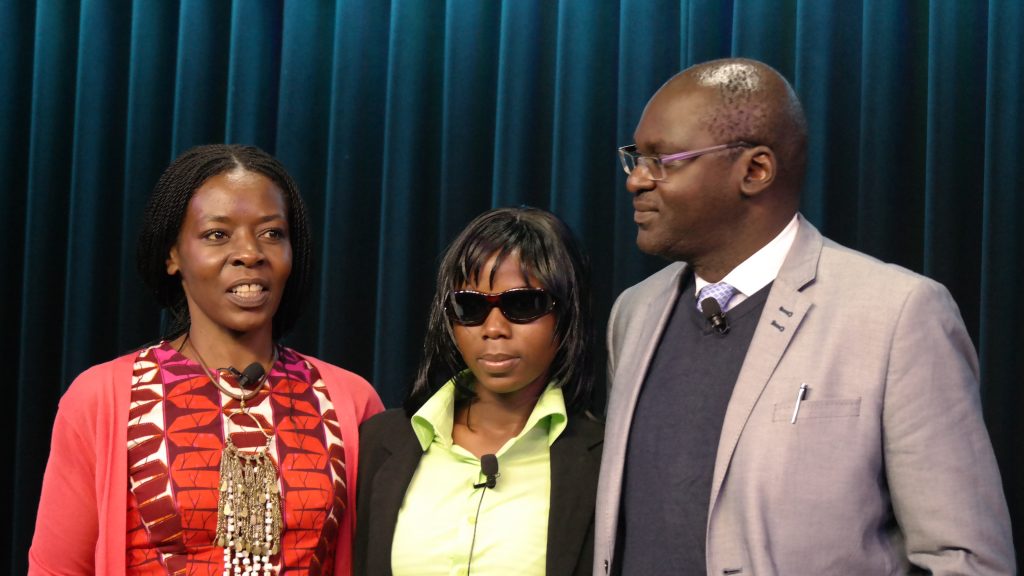 They sat in the back row of the ONE Campaign’s AYA Summit with me in Washington D.C., keeping to themselves and wearing sunglasses in an already darkened room. A computer on their laps, two teenage girls whispered to one another as together we watched videos and heard speakers talking on all ranges of topics affecting girls and women around the world. Vaccines, education, access to electricity, human trafficking, genocide…it was both a heavy and inspiring range of topics as speakers bounced back and forth between storytelling about problems and discussing solutions. Sitting with them and trying (unsuccessfully) to engage them in friendly conversation during breaks, I had no idea how intimately these topics were affecting their lives…

I sat in the back because back row chairs sit beside outlets and I could recharge my phone easily. They sat in back shadows for a very different reason. Because of uncertainty…a desire for anonymity…maybe even fear. One of the two had more immediate reason for concern than the other. Without our knowledge, she was nervously waiting all day for her turn to speak to us and tell us her story.

Her name was Saa* and seven months ago she was kidnapped by Boko Haram from her school in Nigeria.

Last April, the whole world exploded in outrage demanding for these terrorists to #BringBackOurGirls. And then…we heard nothing. Governments searched. Leaders demanded. Parents wept. And we heard nothing.

Then, as if out of the blue, Saa appeared in our midst ready to speak at the AYA Summit to a group of parents armed with laptops and 45 million social media followers.

This is her story.

On April 14, kidnappers from the terrorist group Boko Haram entered Saa’s school in Chibok with a plan to capture all the girls who studied and slept at her school. At 11:30PM, Saa and her classmates heard terrible noises of violence. Scared, she called her father and asked what she should do. He told her to stay where she was and wait for help.

Collecting all the girls to a common area, kidnappers started burning everything from the school. Surrounded by weapons, the girls were told if they shouted or ran away, they would all be killed. Gunmen started demanding information about the location of a local mission, the location of the boys in the school (there were no boys), and where the school kept food. Two girls showed them where the food was and the guards emptied the store of food supplies.

They forced them away from the school and gathered them under a big tree, bringing vehicles including small cars and big trucks. The girls were ordered to enter big, high trucks by climbing up upon a small car and into the truck. “They said if any girl did not want to go into the trucks, she should come out and they would kill her,” Saa told us. After moving to another village, they moved the girls from trucks and started filling the car with the girls sitting on laps. There was not enough room for everyone to sit and three girls were left outside. The men asked the first girl if she was Muslim or Christian. She was Muslim, so they moved on and asked the same of the next girl who – despite being Christian – replied that she was Muslim out of fear for what they might do to her. When the third girl admitted that she was Christian under questioning, one of the kidnappers decided he should kill her right there and let the Muslim girls go. Other kidnappers fortunately intervened and convinced him not to kill her then, and there. Amazingly, those three girls were released for lack of room, but told not to turn back or everyone would be killed. Those girls ran away to the town.

As the vehicles started to travel and moved past one village, a few girls started to jump from the trucks. Saa decided for herself that she would rather jump and die than face the uncertainty of what lay ahead. She told her plan to friend saying, “I would rather that my parents have to bury me in a coffin.” Her friend agreed to jump, too. The truck continued through the middle of a forest in the dark with cars following behind. The girls waited for an opportunity when the following cars were not within sight then leapt from the trucks, Saa first and then her friend. After the jump, Saa discovered her friend had injured her leg and was unable to move very far. She helped her friend into the forest away from the road, so they would not be discovered. They moved as far as they could and slept in that spot until morning.

In the morning – with her friend still unable to travel – Saa sought out help. The first person Saa met was a shepherd. She asked him for help, but he refused out of fear for his own safety. He advised them to wait until 9 or 10 AM when some people may travel that way going to market and possibly help them. Saa argued that not many people would come by because the violence from the night before would make them afraid to come. They must move quickly because the “bad people” may follow that road again. Finally, he agreed to help and carried Saa’s friend on a bicycle.

On the road, they did meet people who were coming to look for their daughters who helped bring the girls back to Chibok. Then, they went back to their hometown. When they arrived home, Saa was reunited with her parents who met her in tears. All of her relatives were weeping because of the ordeal.

Saa didn’t cry as she related her story. She spoke softly and quickly in a matter-of-fact manner. I wondered how many times she had told her story and if sticking just to the facts helped her remain detached enough to get the story out. Even though this was only the second time she had spoken publicly about it, I imagine she must have related it many times to her family and to authorities trying to glean clues to recover her classmates who are still missing.

In the audience, we sat in shock…surprised to be in her presence and horrified by the audacity of Boko Haram to violate their freedom in this way. Most of us were mothers who had a very visceral reaction to the thought of someone stealing our daughters away in the night to be sold, raped, married, or killed.

I thought about that horrible conversation Saa’s father in which he faced a terrible choice of how to advise his daughter over the phone. Would you tell your daughter to run and risk her being shot in the back? Or would you tell her to wait for help, knowing that she might be trafficked and violated if no one comes to help? I thought about the shepherd, afraid for his life. He balked, but did the right thing in the end. I admired Saa’s skillful persuasion in arguing with him to provide aid and her courage to leap from a moving truck in the midst of a forest full of danger from animals and humans.

To my horror, on my Twitter feed that very night as we gathered around Saa to thank her for her courage and her story, I saw 25 more girls had been captured by these monsters. In a video delivered 200 days after Saa’s kidnapping, Boko Haram leaders scoff at the idea at negotiating for release along with ceasefire agreements. The group’s leader, Abubakar Shekau, flanked by gunman reportedly said, “The issue of the girls is long forgotten because I have long ago married them off…Don’t you know the over 200 Chibok schoolgirls have converted to Islam? They have now memorized two chapters of the Koran.” According to A World At School, Boko Haram claims to be holding 500 women and girls against their will.

I write this blog because the issue of the 219 Chibok schoolgirls is not forgotten. Not by Saa. Not by me. Not by a long shot. Saa told her story and gave us permission to use her picture for a very specific reason…to have us share it with others. If sharing her picture and her story is a way to get people to remember why we stand up for girls’ education and why the U.S. should put pressure on the Nigerian government to stop these atrocities and recover the victims, then that’s what I will do. And that’s what I ask you to do.

1.    Continue to use the #BringBackOurGirls hashtag on Twitter. When you see news about it, tweet it to your networks and your members of Congress
2.    Use Saa’s story and write your own blogs or letters to the editor about it to keep it in the media and social media
3.    Be a champion for global girls’ education. As I said in my World Moms Blog post last may, What Can Americans Do for Abducted Nigerian Schoolgirls?, “The welfare of the kidnapped girls rests in someone else’s hands in the short-term, but I advocate against poverty and injustice wth an eye for the long-term. While we wait and we pray for these girls, shouldn’t we be using this anger and anguish to secure a future for all girls?”

I’d like to leave you with a happy thought about Saa’s education. Saa, her friend, and two other escaped Chibok schoolgirls have been brought to the United States where they will be able to study freely alongside other young women who don’t know what it means to live in fear for the right to learn. Her family knows she is safe. Her future is in her own hands. But she continues to fear for her classmates…as do we all. Read her story again. Think on it. Then, act on it.

*”Saa” is a pseudonym she uses for her own protection