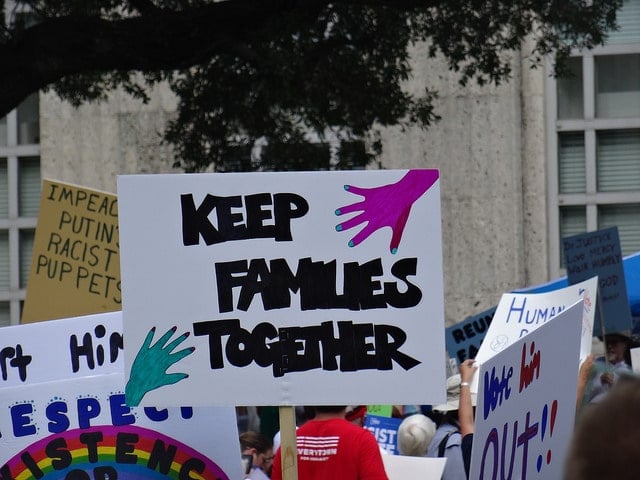 “Who wants some cake?”  My friend, Adelyn Ruiz-Lopez, asked.

“But it’s Tres Leches cake!” she quipped with a smile.

“Tres Leches cake!”  Our heads turned and gazed longingly at the delicious light and fluffy cake.

“Well, maybe one slice,” I replied.

Now in our thirties, my college friends and I gathered together for a brunch reunion at my friend Adelyn’s house in the east coast of the USA. My three-year-old daughter Lily was laughing and playing with Adelyn’s one-year-old daughter Evie. The two youths were covered in bubbles, laughing and sprawled out on the floor playing with Elmo toys. It gave me a momentary reprise to enjoy a mimosa and reminisce and chat with my friends. Despite the darkness happening in our country, this brunch was a unique perspective, about love, friendship and family.

I am a second-generation immigrant who grew up with the brave and courageous stories of my grandparents who immigrated to this country from Europe to start a better life for themselves and their families. I am the lucky one, being born, here, in the USA in Long Island, NY I didn’t have to go through the hardships my ancestors faced getting here.  However, I have been horrified and heartbroken about the new Trump administration policy that has been separating children from their parents at the Texas border in order to curb the influx of immigrants migrating to this country illegally.

Many families being detained are seeking asylum due to gang related violence and political unrest in their home countries in Central America.  After having gone through hell of escaping persecution in their home countries, they encountered a new and never imagined hell –  the fear and utter despair of being separated from their children with little or no hope of being reunited.

As a mother, I am appalled that these young children, including babies, are being detained in cages and tent cities.  Even with a Federal Judge ruling against the Trump administration’s separation policy at the border and 17 states suing the Federal Government, the Trump administration continues to fight to continue with these inhumane practices, with approximately 2,300 children still separated from their families since May.

Despite the happy reunion at our college brunch, there was also that sad reality of what was happening in our country.   I was fortunate enough to have amazing friends to help open my eyes about what it’s like to immigrate to this country at a young age. My friend Adelyn emigrated from the Dominican Republic with her family when she was 10 years old.   In 1991, her dad lost his job as a production manager at one of the biggest oil refineries in the country.

They took their life savings and decided to come to America. Adelyn’s parents, along with their four daughters, came to NY on a Visitor Visa. Adelyn said that her family was one of the fortunate ones to be in a position where they could obtain a visa which is often hard to obtain and often unavailable to poorer families in many third world countries. Fortunately, Adelyn and her family had a path to citizenship through her grandfather who became a US citizen and petitioned for the family to get permanent residency once they were here.

Adelyn’s father, who had been an executive in the Dominican Republic, now worked at a factory and sometimes held three jobs at one time to make ends meet. One of the things he is most proud of is that despite all the hardships that he had to endure, he never asked for help from the US government to support his family. That is a big source of pride for him. He, along with his wife, worked hard, paid their taxes and saved enough money from their jobs to send all their children to Catholic School and their hard work helped create a better life for their children.

In this current political climate, it is easy to misunderstand the plight of the majority of immigrant families trying to come to the United States. Adelyn’s mother-in-law, Mrs. Lopez, came to this country for very different reasons than Adelyn and her family. Mrs. Lopez fled from a country, Nicaragua, where people were being persecuted, starved and killed due to the change in regimes at the time. The majority of immigrants being held at the US border right now are primarily families escaping situations as hostile as those that Mrs. Lopez described. Families seeking asylum need help!

Adelyn took a deep breath and said, “America was a beacon of hope for all people looking to create a better tomorrow for their families. We once were a country that gave asylum to people who were oppressed and in need of protection.  Now we are a country that would rather turn a blind eye to the plight of the suffering.”

As I sat and listened to these stories, I realized that it is through listening to these stories that these mothers and children and families are not just another statistic, another “Immigrant” or attempt by this administration to de-humanize the term. It is through these stories that we realize these people are human and not so different than you and me. They are our friends. They are our family. They are women and mothers I share a Tres Leches cake with during brunch in Corona Queens. They are people I share my American dream with.

I looked down to see my daughter Lily crying and holding out her arms to me. I picked her up and, after a hug and a kiss, she continued playing with Evie.  For that moment, she just needed her mother. I looked down at the two beautiful, innocent children- two innocent children that could now be in a cage in Texas waiting for judgement, waiting for their mother to hold them. Waiting for their mother to hold them and tell them everything was going to be alright. 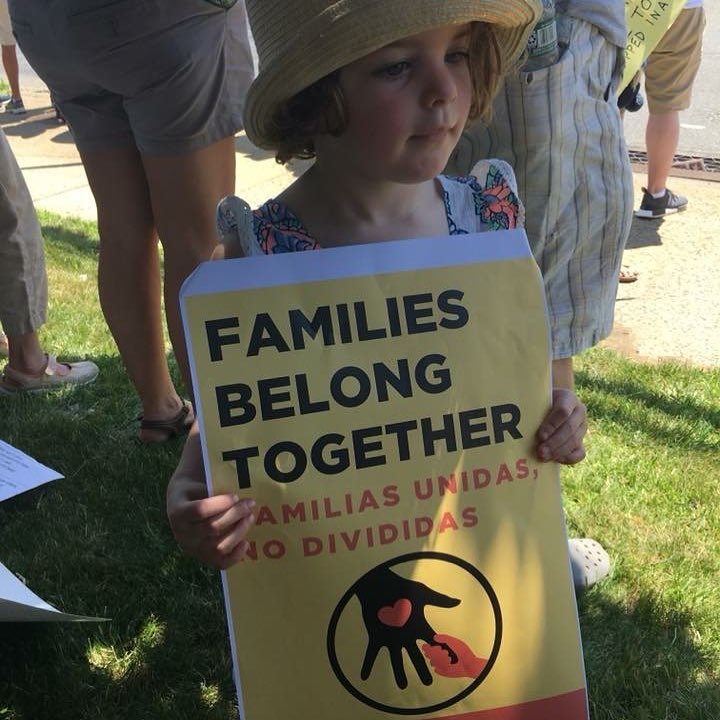 I realize that it is not through hate, but through LOVE that we will persevere as a country. Together we can work with this administration to help find a more humane and just immigration policy. May we hold out our hands and our hearts to these mothers, fathers and children and help fight to stop this inhumane separation of families at our borders. I think about these mothers and realize in another life, I could be the mother praying for someone to fight for me when all hope is lost. I could be the one on the other side, my child ripped from my arms, praying for a new and better life.

I put myself in their shoes, and they are the reason why my daughter and I marched this weekend. 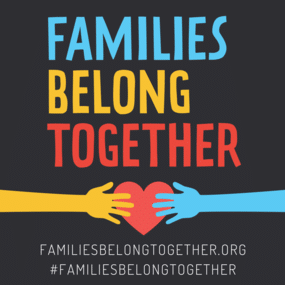 On Saturday, June 30th, people joined to march throughout the United States and around the world to demand an end to the separation of families at the U.S. border. For more information on the march and what can be done next, go to the Families Belong Together website.

Melissa Kuch is a World Mom from New York, USA and author of the young adult fantasy and adventure series, The Hypothesis of Giants.

Photo credit of “Keep Families Together Sign” to Jill Ion. This post has a creative commons attribution license.

Photo credit of the author’s daughter at the Families Belong Together March in Huntington, NY to Melissa Kuch.