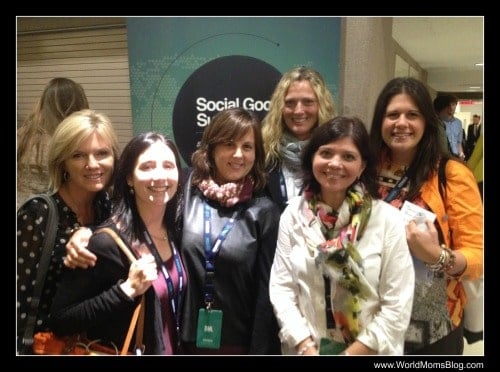 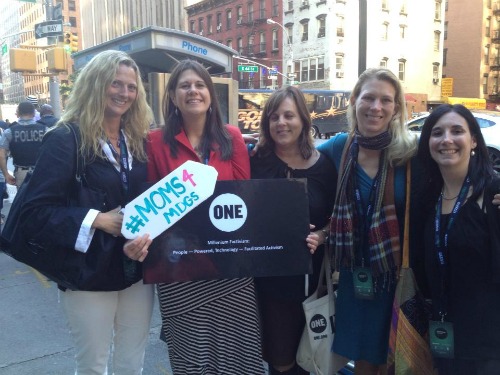 In the late 1970s, a popular saying then was, “Who cares?” — equivalent to the “Whatever!”, which was more frequently used by myself and my peers decades later. Back in the day, my older teenage family members and friends would use the “Who cares?” in natural conversation when I was running around the house as a toddler. I would immediately respond by turning my head to one side and saying, “I care!” My family found this entertaining, and they kept saying, “Who cares?”, to get me to do the silly head turn. (Yep. I just admitted that.)

Too young to explain then, I still remember why I turned my head. I wanted them to know that someone cared, but I didn’t want anybody to know it was me.

Fast forward 30 something years later, and I have found a place where fellow “I Care!” folks convene. Like a Trekkie at a Star Trek conference, I was among the masses of people “Who Care” at the Social Good Summit this year, including Richard Branson, Melinda Gates (who follows World Moms Blog!), Al Gore, will.i.am and Malala.

This year was World Moms Blog’s third year in attendance at the event, which is a “three day conference where big ideas meet new media to create innovative solutions” that coincides with the UN’s General Assembly in New York City. 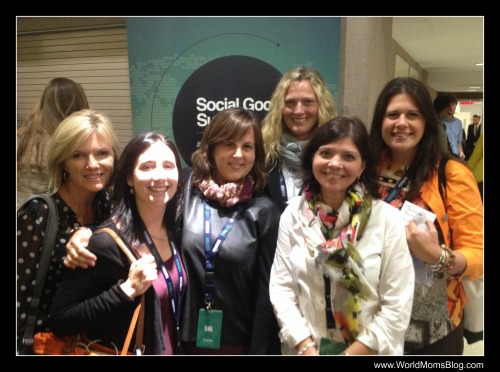 The first year in 2011, our website was less than one year old, and I attended with my husband in tow to help me watch my baby girl. I knew not a soul, and stepped out of my comfort zone to do things like introduce myself to super model Christy Turlington Burns after being inspired by her session on working alongside bloggers to improve global maternal health. I also connected further with the UN Foundation’s Shot@Life campaign, which I later traveled to Uganda with last year and the GAVI Alliance, for which we have hosted global tea parties in support of life-saving vaccines for children.

Our second year at the summit in 2012, World Moms Blog had newly made the FORBES list of “Top 100 Websites for Women 2012” for our first of two times, and I couldn’t wait to listen to and meet Moira Forbes, who heads FORBES Woman. By this time I had roped some amazing, like-minded friends from my blogging circle into the conference, too — Nicole Melancon of Third Eye Mom and Elizabeth Atalay of Documama. They are the World Voice editors at World Moms Blog and cover social good and human rights.

That year, we met some incredible people, such as Nicholas Kristoff, coauthor of “Half the Sky“, a must-read book on the nightmare realities of modern day slavery.  The summit was also a great opportunity for a reunion with fellow Shot@Life Champions, whom we had met earlier that year at training in Washington, D.C. in support of global vaccines, and our fellow #ONEMoms who support eradicating global poverty.

Our third time at the Social Good Summit this past September, our World Moms Blog team expanded, and I was also thrilled to be invited as a #2030NOW “Global Influencer” Fellow by the UN Foundation and Plus Social Good. 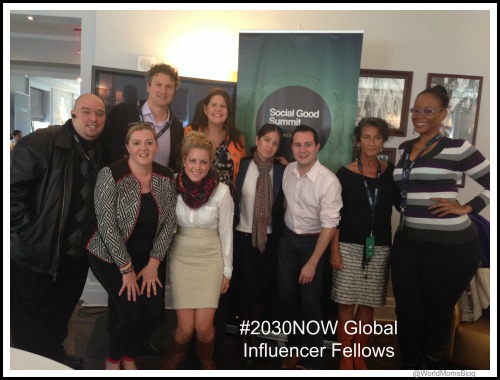 I attended small “Master Class” private sessions throughout the conference and networked with some new amazing peers. One of which was Wall Street power house, Whitney Johnson, who recently named me to her list of the few people who made a lasting impression at the Social Good Summit. I am entirely humbled. The list also includes one of my total heroes who spoke at the Social Good Summit, Malala, the brave girl in Pakistan who was shot in the face by the Taliban and addresses the world on the importance of education girls.

I also got the chance to rub elbows with the fiery Feminista Jones, who is not afraid to stand up in a room of over achievers and a princess and give an effortless tirade on why AIDS is killing black women in America at alarming rates and no one seems to care. I didn’t know if I wanted to hug or tweet her afterwards. We were discussing HIV/AIDS with HRH Mette-Marit, the Crowned Princess of Norway to add some context here.

In addition to the #2030NOW Global Influencers team, the Shot@Life Champions and #ONEMoms, I was also proud to be part of another social good posse. We’re made up of women who happen to also be moms and writers, and we all live for this helping people all over the world stuff. It’s in our blood. And it matters.

Nicole and Elizabeth came back this year, and we added Nicole Morgan, Kelly Pugliano, Jennifer Barbour and the former Miss Tanzania and Miss Africa World  and current social entrepreneur, Nancy Sumari to our pack. Nancy happened to be in NYC on a work-cation, and meeting her was a total highlight!

World Moms Blog contributors took the stage at the Social Good Summit, too!  LaShaun Martin spoke on the “Mothers Connect” panel with Johnson & Johnson and Shot@Life, and Nicole Morgan was asked to speak on her wishes for her children on the same panel. Well done, World Moms!

This year our normal schedule was also highlighted by additional invitations from ONE.org, WaterAid, Save the Children, Shot@Life, The Bill and Melinda Gates Foundation, Women Deliver, and the GAVI Alliance to talk social good and network outside of the summit. This included two invitations to UN Headquarters for discussions, one on Millennial Factivism with ONE.org and Okay Africa and another on Harnessing the Power of Global Public-Private Partnerships with the GAVI Alliance and the Global Fund. We have learned so much that we’ll carry along with us.

For example, at a private meeting with Mark Suzman, Managing Director of International Policy and Programs for The Bill and Melinda Gates Foundation, he gave us a stat that I have continued to turn over and over in my head ever since,

“In Ethiopia 1 in 15 children die before the age of 5 years old.  But, not too long ago that statistic had been 1 in 5 children.”  A true reminder that the world is making progress when it comes to the Millennium Development Goals, but there is still much work to be done.

There were internal lessons for us on gaining the self-confidence to speak up and carry out our work, too. For example, being at a press event when they’re fielding questions for Carolyn Miles, the CEO of Save the Children, about refugee children in Syria and the questions were coming from TIME Magazine, ABC and….well, World Moms Blog. (We care about kids!) 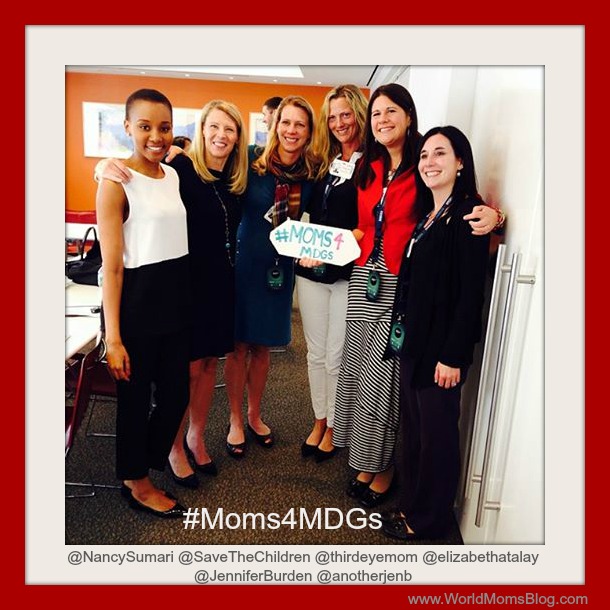 #Moms4MDGs in NYC — Nancy Sumari; Carolyn Miles, CEO of Save the Children, Nicole Melancon; Elizabeth Atalay; Jennifer Burden; and Jennifer Barbour just after a discussion on children refugees from the Syrian conflict. Sept. 23, 2013.

Or going through UN Headquarters security with fellow World Mom and Sister from Another Mister, Nicole Morgan, with our matching bright green luggage that we had both received as gifts from the Disney Social Media Moms conference amongst high level foreign diplomats.

We went from sharing a seat at the “It’s a Small World” ride together in May at Walt Disney World to being invited to the UN headquarters during the General Assembly in September. It really is a small world after all.

Our global posse is rooting together for the good of the world, and we’re also always pushing, encouraging, growing like a snowball and making it easier for each other to do more. The Social Good Summit has proved a great place to connect World Moms Blog with the United Nations and with organizations working towards a better life for mothers and children around the globe, an important part of our mission. Our contributors, in turn, are bringing big ideas to media, just like the creation of our #Moms4MDGs campaign to raise awareness for the UN’s goals to end poverty inspired by our editor, Purnima Ramakrishnan in India. I can’t wait to see what these women will do next!

And we all care very much, dammit. (Turns head to the side to stretch neck from working at the computer screen too long.)

This is an original post by World Moms Blog Founder, Jennifer Burden of NJ, USA. Keep an eye out for more from our contributors about the important global issues we were briefed on. And join our #Moms4MDGs twitter parties each month, where we talk about one global issue (UN Millennium Development Goal) per month.  The next ones are October 16th, 2013 at 1pm and 9pm EST. Click our details in our sidebar, too!