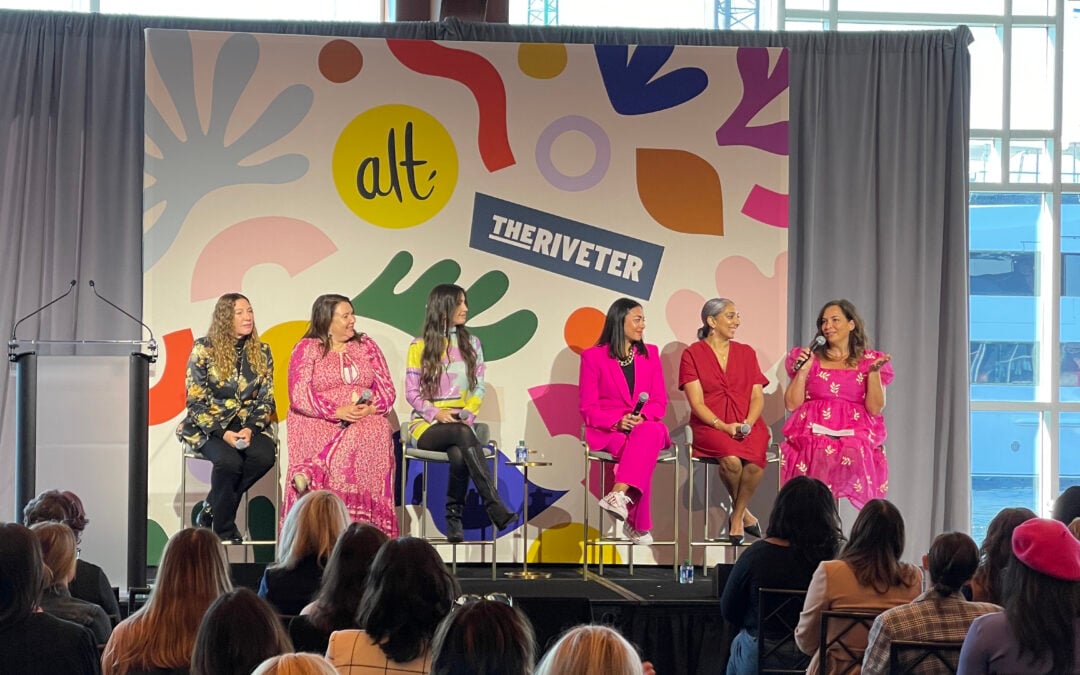 ALT Summit + The Riveter in NYC

The Riveter summed up some of the memorable moments in this post.

The ALT Summit + The Riveter conference was my first in-person event since the pandemic and brought about all the feels! The very first panel of speakers hit it’s mark by capturing the mood of this time.

Many of us are re-emerging from the fog of the pandemic to a new normal. Work no longer means a 9-5 with a commute to an office 5 days a week. One of the positive aspects of the global shut down has been to let us all re-imagine a different lifestyle than the fast pace we’d been operating on.

Granted most of the attendees of the ALT Conference are creators and entrepreneurs to begin with. We’ve been working out of the lines for decades, but it feels like the rest of the world is just catching up. Maybe the answer to the question “How are you?” will be met with something other than the frequent response of “Busy!”. We can strike that quality of life balance we strive for without being judged as harshly.

There has definitely been a shift from the “get it girl” “hustle” attitude of the past decade toward better life balance and self-care. Often the biggest barriers we face come from within, as one of the opening panelists so succinctly pointed out:

Sometimes the enemy is the inner me.

We are often toughest on ourselves. After years of virtual meetings, attending the ALT Summit + The Riveter in person felt great. The messaging was often about supporting each other, community, and pushing through tough times to the other side

All the props to Gabrielle Blair!! And…today is Pub Day for her book!

One of my favorite moments was Brittany Jones-Cooper’s interview with best-selling author and Alt Summit founder, Gabrielle Blair, about her new book, Ejaculate Responsibly. Gabrielle was brilliant, funny, and backed by science in speaking about her new book. She is changing the conversation around the issue of Abortion.

The book succinctly points out that instead of controlling and legislating women’s bodies the focus should be on men’s lack of accountability in preventing unwanted pregnancies. To follow her progress towards change with this book check out @DesignMom on Instagram and this segment on @CBSMornings!

“Ejaculate Responsibly,” a new book written by a self-described “religious mother of six,” argues that “men cause all unwanted pregnancies” — and, therefore, should be the focus of abortion debates.

I have to be honest that the conference was a bit overwhelming, but in a good way. With so many great speakers on topics of interest, and the desire to socialize, after not seeing people for such a long time, it was a lot to process. I was such the kid in a candy shop that I completely missed the morning keynote by Julia Haart — author, designer, and star of Netflix’s My Unorthodox Life.

Protecting Kids on the Internet

After a fabulous lunch where we soaked up the sun overlooking the Hudson River at Pier 60 I attended 7 by 7 by 7, a round of 7 speakers who each presented for 7 minutes. Dahlia Hashad’s presentation on Social Media Battlegrounds: The Fight For A Safer Internet has stuck with me ever since.

She highlighted the risks to teens on the internet, the rise in negative issues, and the algorithms that these trillion dollar (yes, not billion, but trillion) companies allow that harm their users. She and her team with the Disinformation Project are fighting to pass legislation to protect kids online. Dahlia encouraged all of us to stand up to the big tech companies to insist on better safety guidelines. If you are a mom who is concerned about online safety for your children and would like to see legislative protections put in place, you can join the Online Influencer Safety Team here or scan the QR code below.

The vibe of the day was all about a community of women supporting women in their endeavors. It was capped off with closing keynote Sallie Krawcheck-CEO and founder of Ellevest, an investment platform for women, by women. When women take control of the finances more money goes back into the community, and Ellevest is on a mission to get Moore money into the hands of women. I like that idea!

These are just a couple of moments that stood out for me in a packed with information and inspiration day. Don’t worry, if you missed the ALT Summit + The Riveter in NYC, you can now get tickets to go to The ALT Summit in Palm Springs in March!

This is an original post written by Elizabeth Atalay for World Moms Network.