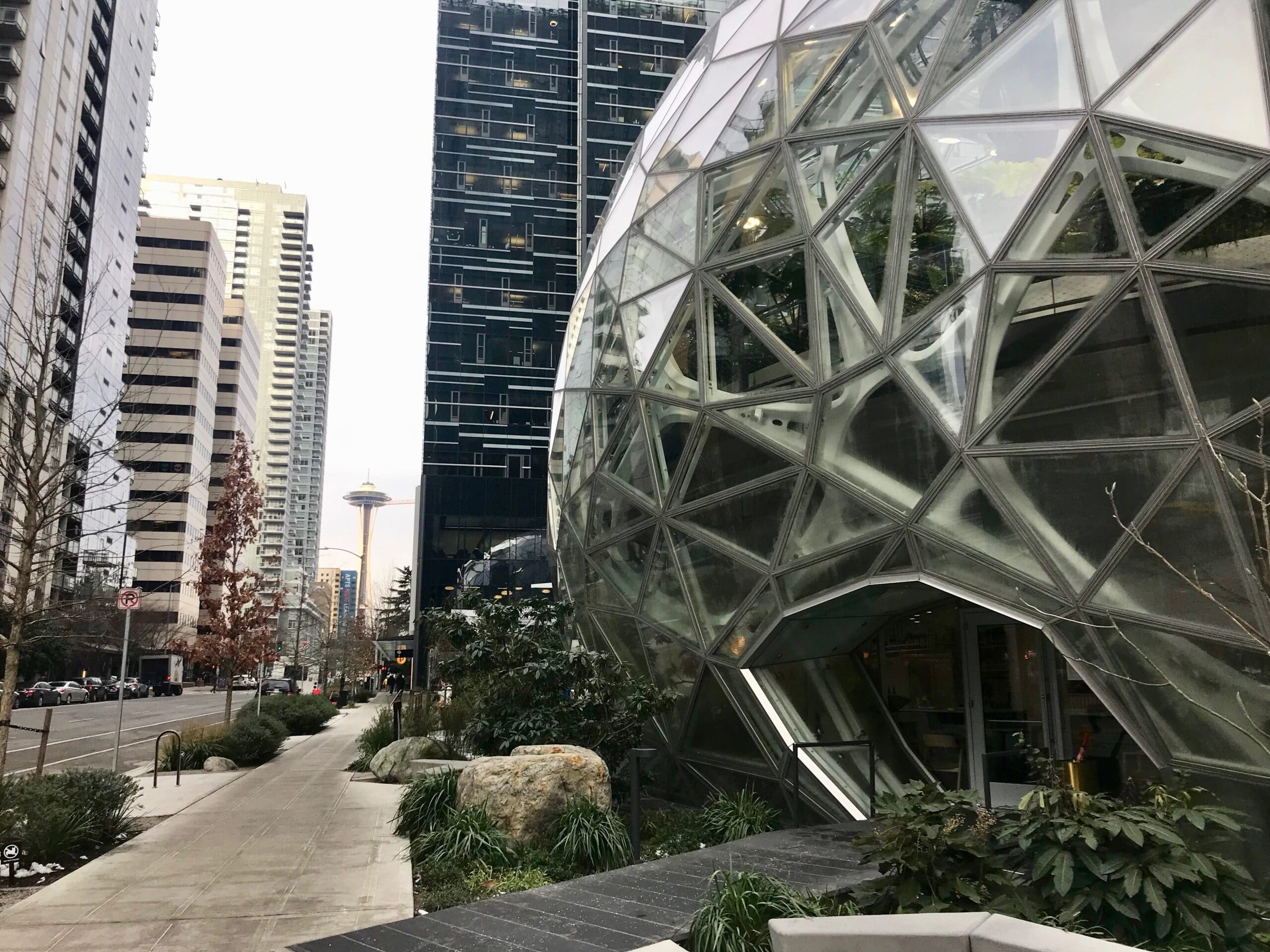 We know that nature has a positive impact on our mental and physical well being, and I felt the effect immediately upon entering The Amazon Spheres. Surrounded by nearly 800 species of plants, the bustle of the urban, outside world, dropped away. I had to remind myself that we were in central downtown Seattle. The topography of Seattle, Washington, has been transformed throughout the growth of Amazon. Office buildings and towers that have popped up over the years are laced with public green spaces. But the addition of The Spheres to this urban landscape might be the most dramatic alteration yet. Ever the industry disruptor, Amazon has re-written the rules of commercial architecture by adding The Spheres to the corporate urban landscape.

The structures bubble below the Amazon Day 1 Headquarters tower, where we met up with our guide, Mackenzie, for our tour. The humidity of the verdant interior cloud forest environment took me back decades to when I visited the real Amazon jungle in South America. I recalled how it felt to be immersed in nature so deeply as to lose oneself, yet here I stood feeling that similar sensation in the heart of downtown Seattle. The geodesic biodomes of The Amazon Spheres opened in late January of 2018 as a “nature immersion” work, meeting, and lounge space for Amazonians (as Amazon employees are affectionately referred to).

“Originality is returning to the origin”

The whole concept made me think of the Catalan architect Antoni Gaudi who lived over a hundred years ago and said: ” Originality is returning to the origin.” By “origin”, Gaudi was referring to the natural world which he explored widely and elements of which he incorporated throughout his designs.

Today one of the largest and most innovative tech companies in the world is echoing this sentiment by bringing nature to its urban campus as a way to inspire further innovation and creativity. What is old is new again, or as Gaudi suggested, nature is our greatest source of inspiration. The Spheres are comprised of 3 connected spherical glass domes made up of pentagonal hexecontahedron Catalan solids. Each dome is four stories tall, and together they span an entire city block.

The Understory is a public information space located under the domes where one station explains that The Spheres “..were the result of innovative thinking about what is missing from urban offices – a direct link to nature.” More than 40,000 plants and nearly 800 species populate the interior of the connected geodesic domes where the temperature is set to an average of 72 degrees Fahrenheit to mimic the plant’s middle-elevation cloud forest environment.

The humidity of a cloud forest environment in the natural world would usually come from direct contact with clouds rather than rain. For The Spheres in downtown Seattle, a series of mist sprinklers powered by reclaimed “waste heat” and energy derived from the adjacent Westin building maintain the cloud forest atmosphere. District energy is a highly efficient system that also provides a sustainable way to power the specialized environment within The Spheres.

The Architect Antoni Gaudi was also influenced by the shape of the Catalan solid and its recurrence in nature. A Belgian mathematician named Eugene Catalan gave his name to geometric Catalan solids in 1865, which would have been a few years before, but just in time, to influence the young Gaudi in his studies of geometry and engeneering. The shapes are also known as Archemedean solids, first described by Archimedes. The design of The Spheres was meant to reflect patterns found in nature. So Seattles’ new and innovative modern architectural wonder, built for one of the most cutting edge, high tech companies, did so by looking to the geometric building blocks of the natural world.

Our Amazonian tour guide, Mackenzie, explained that The Amazon Spheres were built to provide an inspiring environment for Amazon employees based on the same concept, that nature inspires creativity. ” You think differently when you are surrounded by nature, it sparks creativity in different ways.” said Mackenzie “At Amazon, you are working among very smart people, we build the future together.”

The creative meeting spaces found throughout the interior, like the nest pictured above, provide prime opportunities to spark collaborative genius. Innovation is moving at a rapid pace these days and it seems some of the most inspiring methods to tap into cutting edge enterprise are going back to the origins. To unplug and immerse in nature.

The Spheres are open to the public 10am to 6pm the first and third Saturdays each month through reservations. Be sure to book in advance as the dates fill up quickly! The Understory is an interactive information center about the Spheres that is free and open to the public seven days a week.