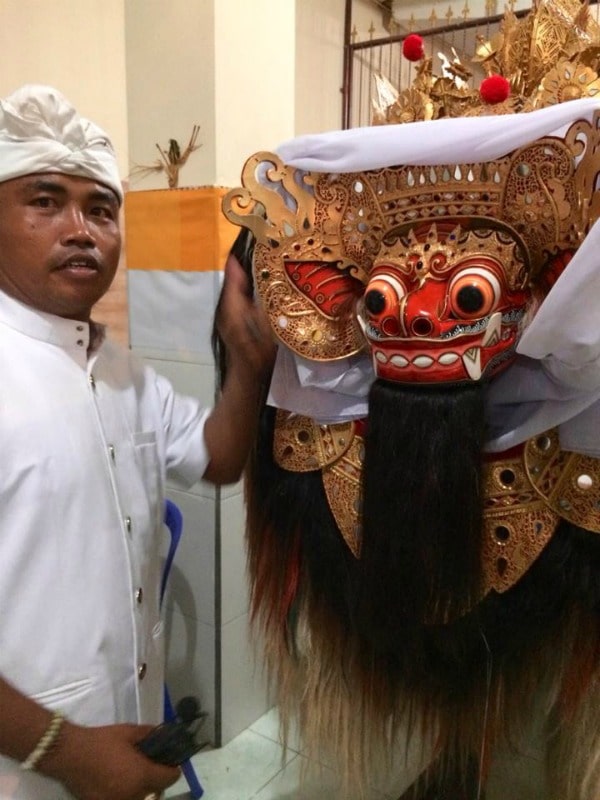 Sit back and take a trip with us to the Pacific, where World Mom, Orana Velarde, reports on the majestic Balinese culture…

Every place in the world has icons that represent it, an image recreated in all sorts of knickknacks and souvenirs for visitors to take home; usually a part of the culture that has much more meaning than can be inferred from a multicolored T-Shirt or fridge magnet. When visiting Paris, it is the Eiffel Tower. But since our family moved to the island of Bali, we have become acquainted with the cultural icons and mythical ceremonial creatures, Barong and Rangda, that ti s known for. 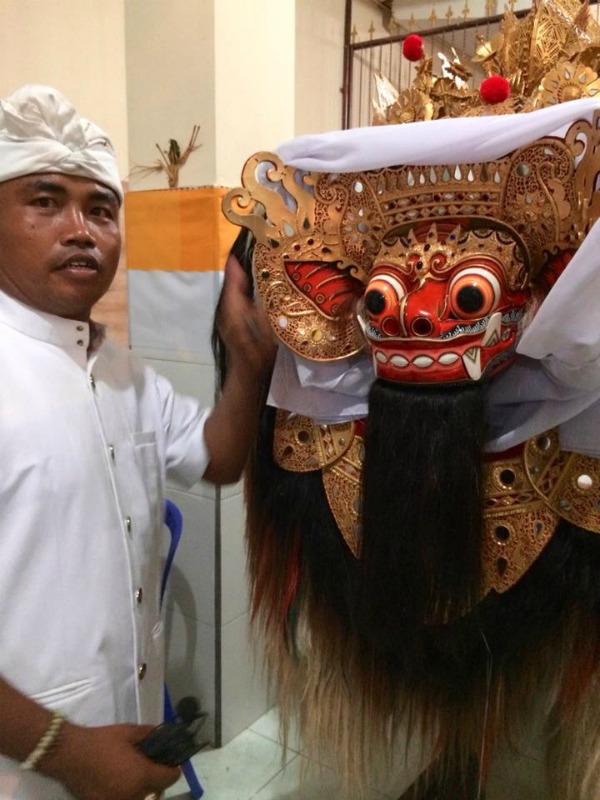 Barong is the king of all the spirits that strive for good on the island and looks like a mix between a dog and a lion covered with long thick hair and fiery eyes adorned with sparkly mirrors. His ultimate enemy is the evil widow witch, Rangda, with whom he fights to restore balance to the universe. She is embodied as an old disfigured woman with a long evil tongue, huge beady eyes and clawed fingers. 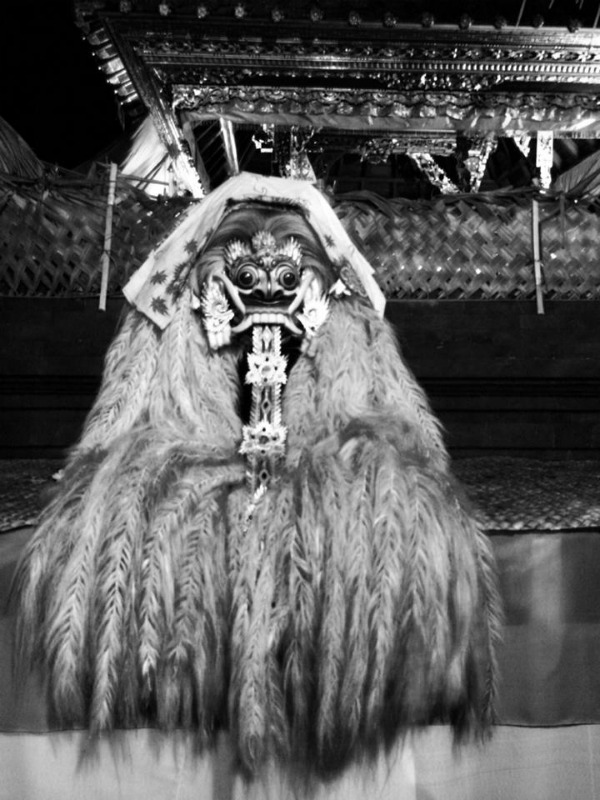 The most common representation of the Barong and his enemy Rangda is the Barong dance, in which dancers dress as the creatures to tell the story of the vengeful widow (Rangda) whom fueled by fury sets out to destroy the entire village that defied her. The village emissary fights her with good magic and turns into the Barong, saving the soldiers and the villagers from Rangda’s evil wrath.

For the sake of mass tourism, there are Barong dances held every night in the artist town of Ubud, but the original Calonarang ceremony and dance is only held in village temples and accompanied by spiritual trances and ritual offerings. These can last hours and late into the night, with a procession to the village graveyard and lots of Gamelan music.

It is believed that once you are at the ceremony you cannot leave, because the spirits are roaming the village and you wouldn’t want to run into them.

Just like there are tourist-centered Barong dances, there is also a mass production of Barong and Rangda masks for tourists to buy and for hotels and other cultural places to use as decoration. But the masks and costumes that are worn to animate the Barong and the Rangda are ceremonially crafted and hold all kinds of special connotations. The barong masks can only be made from the wood of the Pule Tree and permission must be asked of the spirits before the tree is cut down.

Most temples grow their own Pule tree so that when it is large enough, they can use it to make Barong masks that will belong to the temple.Out of one tree, depending on the size, two or three Barong masks can be crafted; these will be the Barong of that temple as if they were brothers. Once every Balinese year (210 days) they must come back to the temple for a Calonarang ceremony. When not in use, the ceremonial masks are wrapped in cloth and put away in baskets to keep the magic contained.

A few months ago my husband was invited to a real Barong dance (shown below) in a village about an hour away from our home. He told me it was one of the most surreal experiences he had ever had. The dancers were in trance and the masks and costumes of Barong and Rangda were impressively powerful. The ceremony lasted all night and ended almost at dawn. 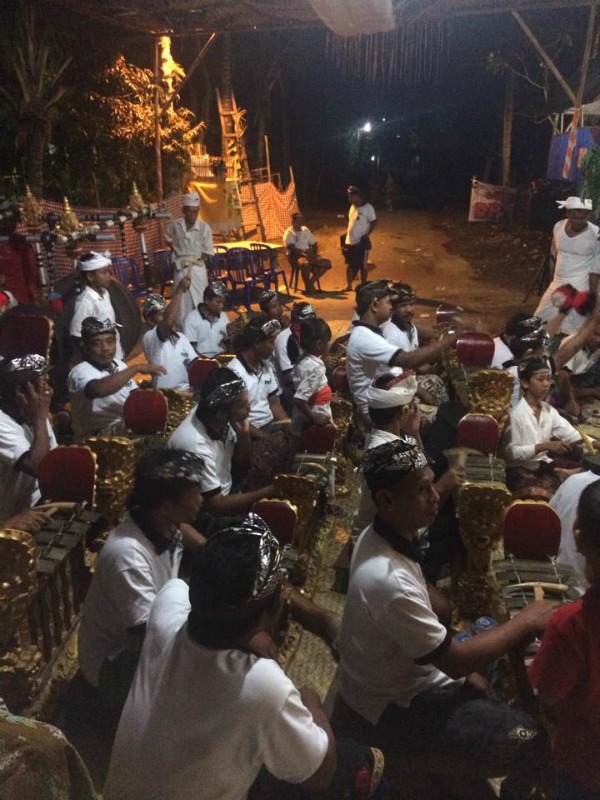 And my kiddos love finding Barong masks all over the island. They like it even more when they find an entire Barong costume in a holding podium so they can climb inside it. 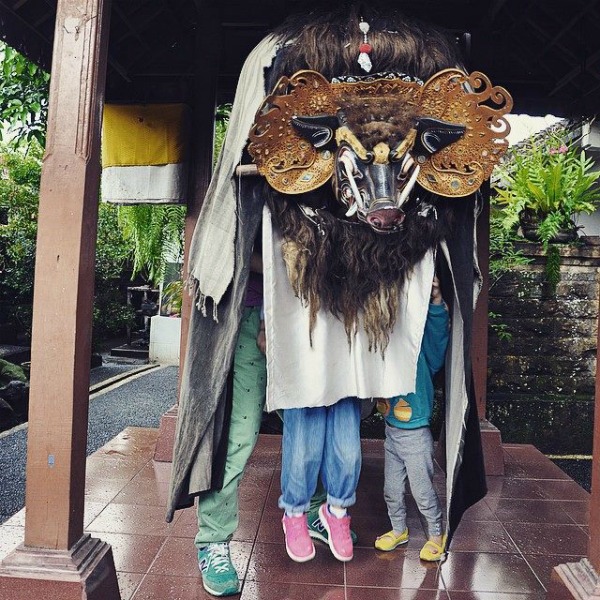 Barong and Rangda have become symbols for the island of Bali, just like the Eiffel tower for Paris and Macchu Picchu for Peru. If you are ever in Bali you should definitely see a Barong dance, but if you by chance get invited to a Calonarang Ceremony, be prepared for the experience of a lifetime.

What is your city, town or region known for where you live? What graces the local souvenirs?

This is an original post to World Moms Blog by World Mom, Orana Velarde in Bali, Indonesia.