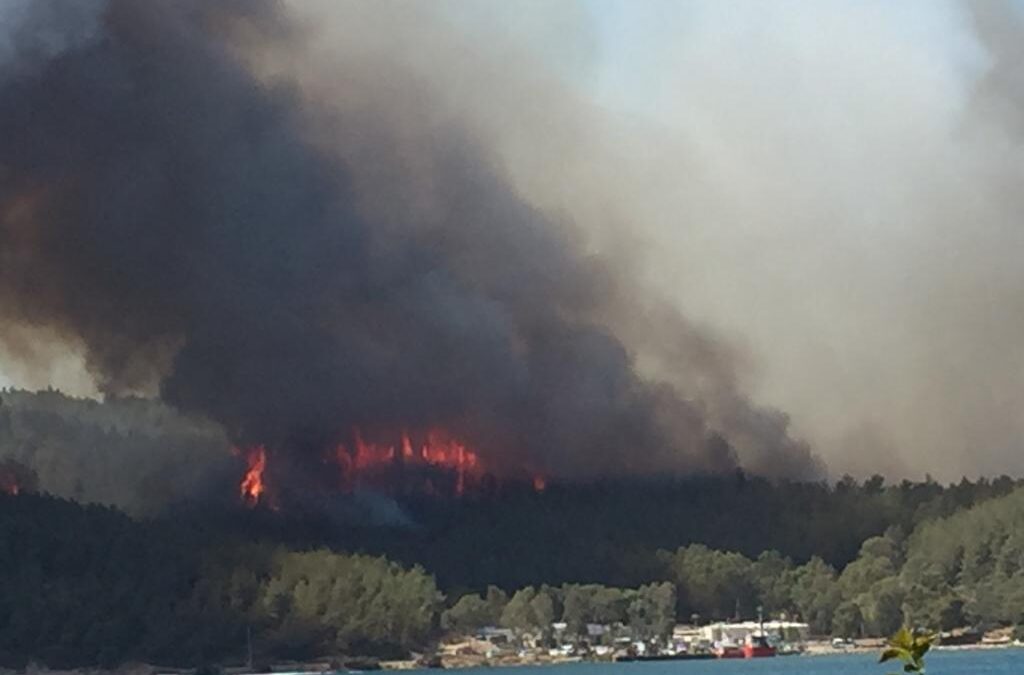 Code Red for Humanity. Wildfires in Bodrum, Turkey in July 2021

On August 9th, 2021, The United Nations Intergovernmental Panel on Climate Change (IPCC) released its 6th Assessment Working Group 1 Report, The Physical Science Basis. The IPCC was established in 1988 to report to governments on the climate change emergency. To those of us that read it, this report felt and sounded like one of the final nails being hammered into the coffin of humanity. And yet, we have known what it would say for a long time. Sadly, we know that for many of our friends, family, and neighbors, this report is not even on their “radar” and many governments of the world do not even seem up in arms nor ready to take immediate action.

More than 200 scientists, who reviewed more than 14,000 papers to arrive at their agreed-upon conclusions, prepared this IPCC report. The information is scientifically solid, proven, and accepted by the world community. This is part one of the IPCC’s 6th report to governments.  The complete report will be released in September 2022 and will be comprised of 3 working group reports (of which this is one), three special reports, and a synthesized document.

What we already knew and what scientists have been telling us for decades is:

The August 9th report confirms the 5 points above and makes strong and direct statements about the state of the climate emergency. We can summarize the three main takeaways as follows:

The report also, for the first time, offers five scenarios for future global warming. Depending on how decisively the world addresses the climate crisis, the outlook for humanity will likely be extreme and harsh. However, if we take the most aggressive action in reducing emissions, the report outlines a scenario where emissions level off by mid-century and then begin to bereduced, giving us a small but real window of hope. The report also looks at impacts on specific areas and specific countries.

Where does this leave us? If increasing climate chaos is “baked” in to the system, what can we do and why should we even try?

First, we must do everything we can so that the future will be less grim, less chaotic, and more hopeful for our children and their children. This won’t happen by itself. It will take all of us.  The world community is meeting in Glasgow, Scotland, in November 2021. This United Nations COP26 (Conference of the Parties) will discuss the current report and review government reports on what countries are already doing to address the climate crisis, based on what was agreed to at the Paris Climate Conference (COP21) in 2015. This recent report tells us directly that incremental change will not work.  Everyone has a role to play.

As moms, we can help our children understand the gravity of the situation at hand but remind them of the following:

We are alive at a critical juncture in human history. Those of us alive today have a unique opportunity to shape the lives of future generations and help create a world that is livable and sustainable.

Everything we do must be done through the lens of the climate emergency. We must use our passions, our voices, and our actions to do what we can and to demand that those who can “go big” do so.  Elected officials at every level of government, government departments, big corporations, organizations of all kinds must focus on creating climate solutions and resiliency. The time for talking is well past. The time for action must be now.

Harriet Shugarman is an economist, professor, writer and activist. Her recent book, “How to Talk to Your Kids About Climate Change, Turning Angst into Action” was released in 2020.