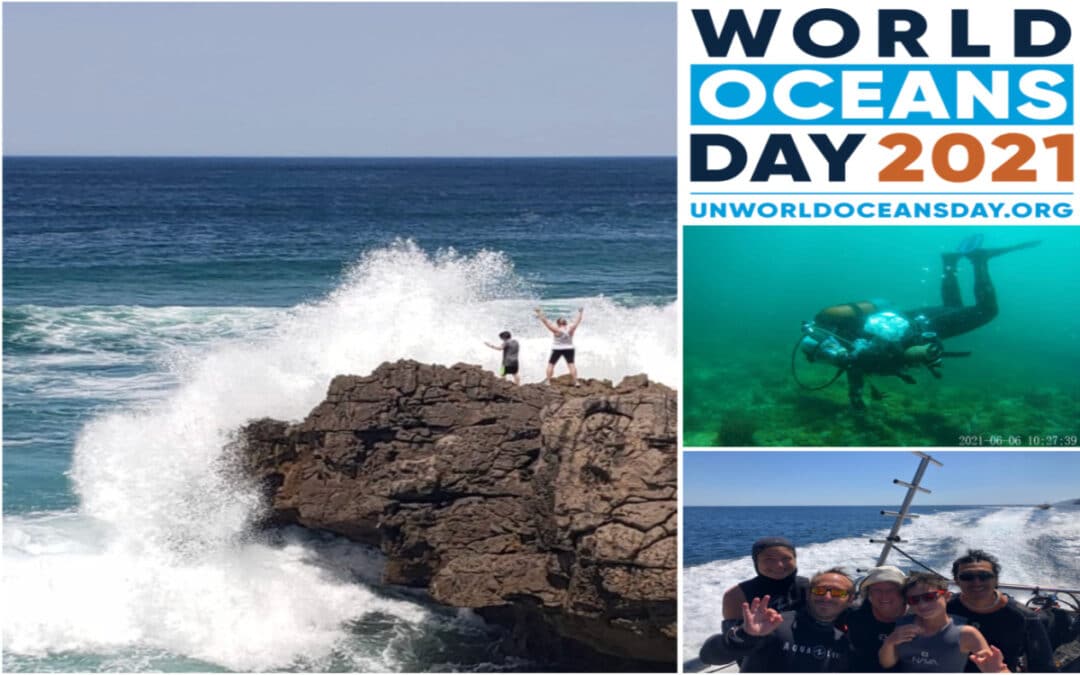 Above and Below: Celebrating on World Oceans Day

Though the World is still reeling from impacts the SARS-CoV-2 has wrought on terra firma since December 2019, today is World Oceans Day. As far as I know, the ocean is one place the virus has NOT wreaked havoc. So, let’s divert focus for a while and celebrate life…teeming below the sea.

If you are lucky enough to live on or near the coast, then you know the power of looking out over the sea. It’s a vista that can be inspiring, breathtaking, powerful, calming and foreboding; sometimes simultaneously. Remarkably, the ocean covers 71% of our planet’s surface and contains 97% of all water on Earth. Furthermore, about 80% of it has yet to be explored, mapped or even seen. Though the ocean is one, continuous body of water, humanity has divided it into 4 geographic regions: Pacific, Atlantic, Indian and Arctic; 5 regions if you also include the newly designated Southern Ocean, around Antarctica (facts courtesy of National Geographic). Maybe you already knew all of this. That’s awesome.

But did you also know that today, June 8, is the United Nations designated World Oceans Day?

The proposal to mark June 8 to celebrate the ocean came from the Canadian delegation, at the 1992 Earth Summit, in Rio de Janeiro, Brazil. It didn’t pass an official resolution at the UN General Assembly until 2008. So, because June 8, 2021 is both the official relaunch of World Moms Network and UN World Oceans Day, I dedicate this post to both causes.

The theme for UN World Oceans Day 2021 is The Ocean: Life and Livelihoods. Because this is a post for World Moms Network, I’ll talk about how the ocean impacts my own family’s life.

Let me start by saying that the ocean has been a huge part of my life from inception.

I was born into a family of ocean lovers. My father served as a Navy Salvage Diver and my mother is an ocean devotee. As a child, I was surrounded by images, artifacts and elements of the sea. We spent lots of time at the Philadelphia Navy Yard, onboard boats and summering at the shore. In fact, when I think about it, I can hardly recall a family vacation that didn’t somehow involve being on, in or near the ocean. We spent hours at maritime museums, aquaria and gazing at painted seascapes in galleries near and far.

My college major had little to do with the ocean but one of the most impactful courses I took was Coral Reef Ecology. My college was located in Memphis, Tennessee. The lab portion of the course, however, was in The Bahamas. For one week in May, we lived at a science research station on the tiny island of San Salvador. We spent our mornings snorkeling and logging the biology of the island; and we spent our afternoons studying the geology of it. The sea enchanted me with the vibrant and complex societies just below its surface. I wanted to go deeper and learn more.

I knew I needed to get SCUBA certified.

In my early 20s, when I was living and working in Asia, I determined to get my diving certification so I could explore more of the world below the waves. Over the next decade, the journey took me to dive sites around Southeast Asia, the Middle East, Mexico and the Caribbean. Whenever there was time—and a nearby dive shop—I went.

When I met my husband in 2000, I encouraged him also to get PADI certified, so we could explore together. And we did. Early in our relationship, we spent a few days on a live-aboard dive boat in Thailand, in search of the ever elusive Whale Shark; we still haven’t spotted one. On our honeymoon, we did a wreck dive. Together we have seen reef sharks, barracuda, sail fish, and all kinds of rays. We have encountered pods of sea turtles, eels and octopus and infinite numbers of fish. Diving together was pure joy.

In the past 15 years, we have dived just a handful of times; waiting for that day when maybe we could get our kids interested in diving too.

That day has arrived. This is the year, at 12 and 15, when our kids finally are ready to take on the adventure with us.

Though we all were born on one side of the Atlantic—the East Coast of the United States—we now live on the other side, the West Coast of Portugal. Back in northern New England, unless you’re diving for a lobster dinner, SCUBA diving isn’t a terribly popular past time. It’s COLD! And though the weather in Portugal is temperate and sunny year-round, the Atlantic here is even COLDER!

Diving in frigid, 17C/62F degree water with 7mm thick wetsuits, hoods and booties may not seem like ideal conditions but in Portugal, diving is a big deal. In fact, pretty much anything to do with the ocean is a big deal: surfing, kite surfing, wind surfing, boogie boarding, fishing, spear fishing, sport fishing, eating fish and, of course, sailing. The Portugese are a seafaring people. This is the home of The Discoverers after all.

In the middle of a pandemic, faced with social distance requirements, excessive screen time and lockdowns, what better place to escape than the ocean?

And that is what we did. We invested in getting our kids their SCUBA certifications; not because we plan to go diving every weekend nor even every vacation vacation. As World Moms, we’re all on a path to raise global citizens and part of that journey requires raising awareness at all levels. Sure, diving is a luxury—just like skiing or any sport that requires extensive gear—but when you experience an environment, when you truly spend time getting to know its surroundings and inhabitants, you become a citizen conservationist.

So today is World Oceans Day and to honor it, I’m happy to report that this past weekend, both of my kids did their first open water dive. When I descended 11m/33ft into the chilly waters off the coast of Sesimbra, Portugal and saw my kids kneeling on the sandy bottom, it was something akin to magic. I never got the chance to dive with my own father—the person who first planted the love of the sea deep within me—but by witnessing it planted in my own children, I know that I am passing on that legacy. I know that I am raising stewards of the sea.

This is an original post to World Moms Network from our Managing Editor, Kyla P’an, who resides in Cascais, Portugal. All photos in this post are attributed to the author.