Field Report From #BrazilMDGs : Health Care System – Right To All 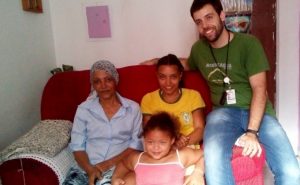 Raimunda with her family and Dr. Rodrigo D’Aurea from the Community Health Center

Raimunda is a 46-year-old mother to two beautiful daughters aged 19 years old and 7 years old. She sadly has lungs cancer, stage-4, has undergone chemotherapy, and now is in palliative care. Her family physician, Dr. Rodrigo D’Aurea took us to her house  yesterday in a locality called Boa Vista in the suburbs of Sao Paulo which has a population of 20,000 people. She was diagnosed almost a year and half ago and she was already in stage-4. She has a very aggressive form of lung cancer. She used to smoke a long time ago, but has kicked the habit for more than a decade. Her husband used to contribute to the family’s upkeep until her elder daughter was 18 years old, but in the past year, he has stopped doing it. She has some pension from her retirement and she crochets for a living. You can see the beautiful white crochets folded on her couch.

Her doctor says, there are four things he has to take care of – firstly the physiological aspect of her body having cancer, secondly her psychological acceptance, how she deals with it, and accepts it emotionally, thirdly her dependents (here her daughters who will need to be adopted after her time), and fourthly he has also spoken to her priest and arranged for things. It made us a bit sad listening to it, this way. But hold on, there is more to this article. Melody, Julianna (our translator), and I accompanied Dr. Rodrigo D’Aurea and the health care worker on a work visit. 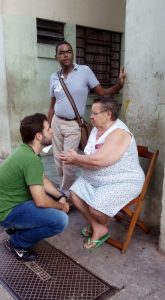 Dr. Rodrigo D’Aurea being greeted by yet one of his elderly patients on the street. The community health worker looking on.

I am here all the way from India as an International Reporting Project Fellow, reporting about the Public Health Center’s community visits. Here, a team consisting of a doctor, a nurse, two nursing assistants, a community health worker visits their patients in their assigned locality (Boa Vista here) and speak to the people and treat them. As we walked along the streets, I could see every resident saying “Ola” (Hi/Hello) and “Tudu Bem” (How are you) to Dr. Rodgrigo. It looked like he was a friend, a son, a brother to everyone whom we passed along in the streets.

The USB (Unidade Basica de Saude) which basically means Unit of Primary Health located in Jardin Boa Vista (Garden of Boa Vista) takes care of its 20,000 residents. It is almost like a hospital with about ten consultation rooms, a dentistry, Vaccination room, first aid and emergency room, a small nurses’ station, and some admin rooms. It is elegant, clean and hygienic. The doctors and health workers cater to not just the medical needs of the residents, but to their emotional and family needs.

Because here social problems have a big impact on the health problems of residents.

Dr. Rodrigo D’Aurea leaving for the day after giving us a tour of the clinic and the community

Dr. Rodrigo mentioned that he is more like a psychologist, counselor and a family doctor, rolled into one. He knows more about all the residents than anybody else. He feels morally responsible and I could feel the pride in his voice when he spoke about them.

He owns the hearts of the residents, is all I can say.

This Community Health initiative is a wonderful one and it is funded by the SUS. (Sistema Único de Saúde) which means the Unified Health System. It is Brazil’s publicly funded health care system. SUS was created after the Brazilian Constitution of 1988, which assured that health care is a “right of all and an obligation of the State”. Prior to that, only people who contributed to social security were able to receive health care. The creation of SUS was important in the sense that more than 80% of the Brazilian population depend on it to receive medical treatment.

These public health units focus mainly on the family health instead of the health of a single individual. It is interrelated. A family’s social, mental, and emotional well-being is directly related to the physical health of the individuals. It taps into different knowledge and practices from the perspective of a holistic and problem solving approach, enabling the creation of bonds of trust through ethics, commitment, and respect. They have different specialists visiting them often and on request. They also refer cases to different units like oncology, gynecology, and such for detailed assistance.

All the population of Brazil is covered to receive primary health care. It does not matter if you have insurance or not, if you are covered under your social security or not. Brazil is on the road to achieve a 100% health coverage. This is something the other developing nations in the world have to carefully watch and learn from.

Purnima Ramakrishnan is a fellow of Journalism with the International Reporting Project (IRP), reporting from Sao Paulo, Brazil.