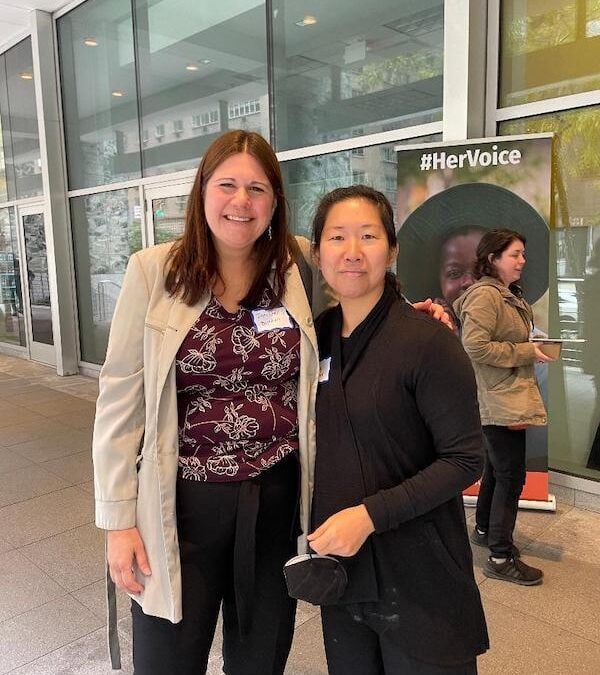 We are back this week from our extended summer break and have been up and running behind the scenes in October planning out our next year! Today, we have a special call to action for World Food Day…read on!

Sunday, October 16, 2022, I was in Philadelphia with the CARE foundation for World Food Day at the hip Taiwanese restaurant, Bao·logy, with the amazingly talented and inspirational Chef Judy. And I don’t use those adjectives lightly – Judy’s bao buns, dumplings, noodles, and more were delicious!

Local public servants, CARE volunteers, and people working on humanitarian initiatives that help feed those who need it most in Philadelphia attended the event. There, Chef Judy encouraged guests to join together to help eliminate hunger and powerfully stated that we’re “under-resourcing our most important resources, our people.” Now that Chef Judy and CARE have sounded the alarm and called us to action this World Food Day, I’m calling YOU to action, too. But first, let’s take a deeper look at what food insecurity looks like in my home country, the U.S., and globally. I’ll also provide some simple tips about how we can all help reach SDG #2 from our own corners of the world!

What is the current food insecurity situation in the U.S.?

In 2021 89.8% of the U.S. population was food secure, leaving 10.2% of the population not being able to meet their nutritional requirements. Maybe you think 10.2% sounds small? – Well, that is the equivalent of 13.5 million households, or the 33.8 million Americans living in them, that need food.

To put it into perspective, that is about only 4 million people less than the ENTIRE population of Canada OR about the same as the entire populations of the countries of Peru or Saudi Arabia!!! This is not ok.

White House Conference on Hunger, Nutrition, and Health and the Farm Bill

At Sunday’s event I learned that there was a recent White House Conference on Hunger, Nutrition, and Health on September 28th. The U.S. government coordinated with leading companies and organizations around the country to tackle the nation’s food insecurity state by state. President Biden is planning to put the U.S. back on track to eliminate national hunger and reduce diet-related diseases such as, diabetes, obesity and hypertension by 2030.

Some examples are Bowery (an indoor vertical farming company) forging new partnerships with hunger relief organizations increasing its produce donations by thousands of pounds, Chobani’s adopting of 3 schools to end food insecurity and also launching a program to encourage the adoption of 50 schools by additional businesses across the country, Google making the search for SNAP benefits more easily accessible, and the American Academy of Pediatricians focusing on training all of its doctors to better identify malnutrition and referring patients to helpful resources. Organizations are attacking the problem in all different creative ways. Here is a full list of what was pledged at the conference.

Additionally, in the U.S. the Farm Bill, originally passed in Congress in 1930 as part of the New Deal, is also up to be refunded for 2023. It’s original three main goals were:

Today, the Farm Bill impacts “a multitude of topics, such as health care, poverty, climate change and school foods.” Refunding this legislation is important to farmers and national nutrition programs.

With all the focus on the U.S., you may be wondering where your country or the entire planet stands when it comes to food security. According to a Standing Together for Nutrition study, in 2019, the UN World Food Programme estimated that 150 million people in 81 different countries needed food assistance. In February of 2022, it rose to 276 million people. The agency predicts that number to increase to 323 million this year alone!

Sadly, the planet is not on track to reach Sustainable Development Goal #2, to eliminate hunger and all forms of malnutrition by 2030. According to CARE, recent global events such as 1/3 of Pakistan being flooded and staggering inflation in Lebanon ameliorate the global hunger situation. Not to mention, the strains on the global grain supply from the war in Ukraine.

This past July, I was on Capitol Hill in Washington, D.C. lobbying U.S. Congress with a fellow CARE advocate, Christina Nhankundela of Mozambique. CARE works in over 100 countries servicing over 90 million people in over 1300 projects relating to crisis, food and water, health, education and work, climate, and equality. Christina and I were both part of an even bigger movement of over 200 CARE advocates (including World Mom, Cindy Levin, too!) on the hill asking our senators and representatives to support the reauthorization of the Global Food Security Act.

The Global Food Security Act runs out in 2023 and is not emergency food funding. It provides sustainable programs to mostly women globally. Not only is the act keeping people fed, which is just the right thing to do, but it is a fantastic example of the U.S. working together from both political aisles to make a humanitarian impact.

So, you may be thinking now what you can do from home to help the world reach SDG #2. Here are some ideas!

1) You can join CARE as a local advocate or donate.

2) Contact your domestic government representatives to tell them why you think it’s important to eliminate hunger in your country or globally! And ask them what they are doing about it!

For example, if you’re in the U.S., you can call and write your Congress members to support the Farm Bill and the Global Food Insecurity Reauthorization Act and vote in November for Congress members who support the legislation. Not sure where your representatives or candidates stand on eliminating hunger and what food related policies they support? Pick up the phone, call them, Tweet them, Instagram message them, ask in a Facebook comment, show up at a campaign event — whatever it takes — just ask!

I hope you will join the World Moms in our call to action, doing what you can when you can, to help feed the people who need it most! Please tell us in the comments or on social media what step you took! We want to hear from you!

This is an original post to World Moms Network from founder, Jennifer Burden, of New Jersey, USA.

Come check out our TikTok (Hey, did you know we’re on TikTok? We are just beginning over there, so give us a follow!), Instagram, Twitter, and Facebook posts about what the World Moms have been up to!