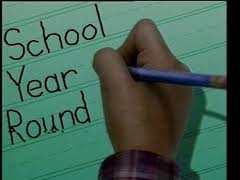 The new school year begins begins the first Monday in July for students on tracks 1, 2 and 3. Students on track 4 start school 15 school days later as students on track 3 “track out” for their first 15 day break. Year-round students get the same holidays off as students in “traditional calendar schools”, and all students are in school for 180 days each year. It’s quite a feat to accomplish that, I think. I’m grateful I don’t have to make the schedules! END_OF_DOCUMENT_TOKEN_TO_BE_REPLACED