About a year ago, my laptop died.  For a technogeek like me, this was nothing short of a disaster, and I became a general nuisance around my household.  I would hijack George’s computer, much to his disgust, or I would hover restlessly behind my betrothed’s left shoulder because I wanted him to get off his computer so I could update my Facebook status.  After a few days of this, Gerard got fed up (who can blame the poor man?) and went out to buy me a new laptop.  James, who had just turned four, accompanied him.

From what I’ve been told, the actual shopping part of the trip was uneventful. It was the trip home that got interesting.

It all started when James, from his booster seat in the back, announced that he wanted a donut.  Gerard told him to look out for a donut shop, and for the next few minutes they were bantering back and forth: END_OF_DOCUMENT_TOKEN_TO_BE_REPLACED

Back to the pen… 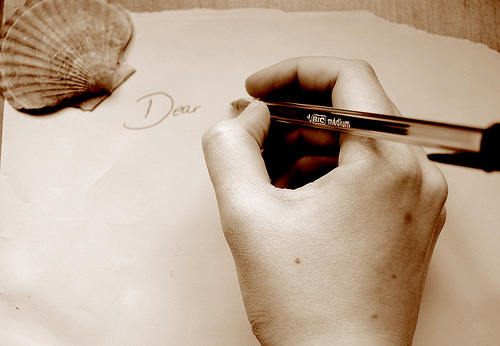 Ah, technology.  When it’s running smoothly, life is good. Facebook, Twitter, MySpace, Skype, iTunes, You Tube, email, IM’s, blogs, games, news, videos…..whew, I need to take a break!  Which is what I did, not voluntarily, mind you.  My borrowed laptop crashed, and  let’s just say the last week has been difficult.

Okay, that’s an understatement.  I mean really, I had to write out my thoughts and ideas on actual paper.  Paper?!?  Do you know how hard it was to find paper around here?  Or a pen, for that matter?  I’m not really sure I can decipher the chicken scratch that has become my handwriting.

What did we do without computers and the internet and the instant gratification of talking with near strangers in real-time?  It’s amazing, really, to think that we, as a civilization, have lasted as long as we have without such technology.  Pony express?  Please!  Could you even begin to wait months for news from around the world?