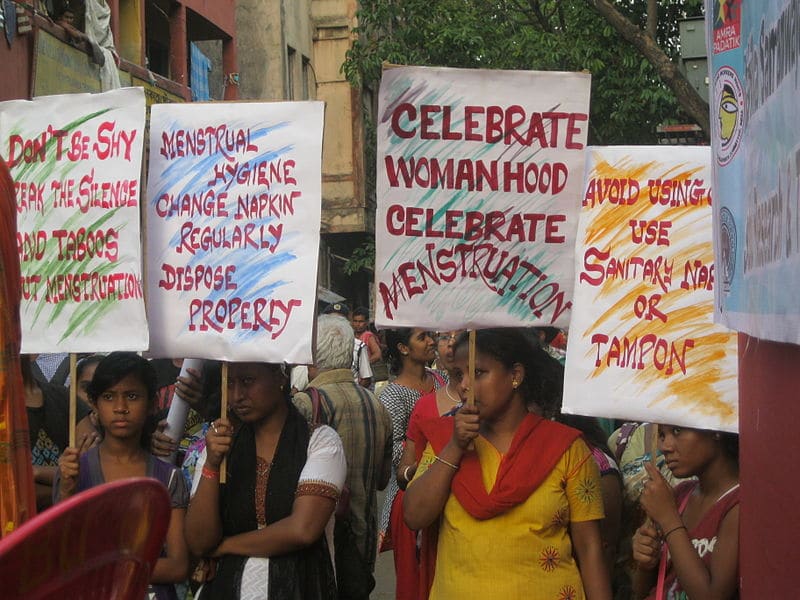 Discrimination Due To Menstruation

Universally, women and girls menstruate. The age may vary for every young girl, but the experience can be traumatic, sometimes even deadly.

I recently came upon two news items that shocked and saddened me. The first story was of an 11-year-old girl from the UK who had her period while in school. When she asked to be excused to go to the bathroom because her period had soaked through her clothes, she was refused by two staff members on two separate occasions.

The young girl was trying to avoid being singled out by the rest of her class, possibly the whole school. Instead of being supported by the staff, she was dismissed, which traumatized her from going back to school. Since those incidents, the girl has been given a bathroom pass, but the damage had been done. According to a study done by Plan International UK back in 2017, 49% of girls and young women aged 14-21 have missed at least one day of school as a result of their period. In addition to being humiliated for having a period and pain as a result of it, the cost of buying sanitary products may be prohibitive. Period poverty in the UK affects about 10% of girls who can’t afford them and 12% find ways to create makeshift sanitary wear just to have something. There have been initiatives launched like the Red Box Project based in Bristol, where period products are given for free, but more has to be done to eliminate the discrimination felt by girls and women who are affected.

The second story was about 21-year old Parbati Borgati from Nepal who was staying in a menstrual hut during her period and died of suffocation from smoke inhalation. Borgati who had been staying in this abandoned hut decided to keep warm one cold night by burning wood and clothing and tragically died in her sleep. Menstrual huts are not unusual for women in some parts of Nepal, India, and Africa and the concept of these huts comes from years of tradition and in some cases, out of religion.

The tradition of “chhaupadi” In Nepal is part of a long-standing belief stemming from Hinduism that during a woman’s menstrual cycle, she is deemed unclean. As part of this tradition, women are banned from being in the kitchen, using kitchen utensils, sharing meals, going to the temple or being with their families, and are segregated to huts made from mud or stone. The huts are no bigger than closets and these women brave the elements and pests on their own.

In recent years, women’s rights activists have fought to end “chhaupadi”.  Even the government of Nepal has outlawed menstrual huts since 2005. They have gone so far as to criminalize it this past August for those who continue to force women to use them, but unfortunately in some western villages of Nepal, these actions have not been as successful. While tradition can be blamed for the continuity of their use, guilt plays a huge part in it as well. In areas where menstrual huts have been used by women for generations, it is difficult for them to turn their backs on what’s been viewed as part of their way of life.

One of the ways that “chhaupadi” is being discouraged is through cash incentives. Recently, a rural governor has offered to give $5,000 rupees to any woman who rejects using menstrual sheds. While it seems like a great solution, it’s not sustainable since so many still use these sheds out of tradition and fear of being ostracized by their families for not following this custom.

My experience with menstruation did not result in tragedy, but it was still traumatizing for a thirteen-year-old girl. I was on a family vacation when I got my period while playing outdoors with my cousins. I felt some discharge on my underwear and thought I had soiled myself. I ran to the bathroom and was gripped with fear when I saw blood on my underwear, unaware of what was happening to me. It wasn’t until my aunt knocked on the bathroom door to see if I was okay that I told her about the blood. It was then that I was educated about “periods” and what I should do next and in the future.

Why was I told about “periods” by my aunt, as opposed to my mother? As someone whose mother came from the Philippines, the word “period” was never discussed in her household, so I was never educated about it by my mother. This was a silent “problem” and no one was allowed to talk about it to anyone, especially men. Gender roles play a big part in a lot of Filipino families, and “periods” are seen as female problems. While there have been strides over the years to ensure that young women in rural parts of the Philippines are educated about menstruation as those living in urban areas, the perception of having a “period” is still seen as a woman’s problem.

In light of last year’s Academy Awards event in the US  where the award for Best Foreign Film was given to a documentary short made in India titled, “Period. End of a Sentence.”, there has been a great amount of awareness brought towards the issue of menstruation. Created by Rayka Zehtabchi, the film showed how menstruation is still a taboo subject in rural parts of India and that even the word “period” evokes shame for girls and ignorance for boys. Education about menstruation plays a huge part in breaking the taboo it has affected generations of girls and boys. What struck me was how the girls reacted towards the word as opposed to the boys. The girls were painfully self-conscious saying the word, while the boys were quite unaffected by the issue, even worse, had no idea what the word “period” meant.

The film follows some women in rural Hapur district, just outside of Delhi, India, and exposes the contradicting points of view regarding menstruation between genders and as seen by older generations, but there were positive results as well. Discussing the subject of menstruation and the necessity of safe menstrual products like pads was crucial for both genders. Another positive outcome of the film was creating job opportunities for these women so they could feel empowered. That opportunity would come from an unlikely source, a man named Arunachalam Murugunantham from Tamil Nadu.

When Muruganantham found out that his wife was using newspapers or filthy rags for her period, he decided to create sanitary pads that were safe and could be purchased at a low cost. Muruganantham created a pad machine that made sanitary pads using cellulose fibers from pine wood pulp, which was great for absorption and retaining the pad’s shape. Traditionally, men have never been involved with anything related to menstruation, especially in rural parts of India, so it’s no surprise that Muruganantham’s wife, Shanti, was not supportive of his invention in the beginning.

Muruganantham’s goal of educating young women about safe sanitary pads through his pad machine and the rise of a micro-economy from selling them in local stores at a low cost has given these women the confidence to provide for their families. It was amazing to see the transformation of these women from being shy and silent about the topic of “periods” to feeling empowered and ready to provide for themselves and their communities as a result of Muruganantham’s invention.

The success of “Period. End of Sentence.” is an indication that more has to be done to enlighten parts of the world about menstruation. In today’s world where women from Western countries can speak freely about reproductive health, it’s heartbreaking to see other women that are still suppressed either by tradition or guilt to speak out about issues that harm them or lose their lives, just like the women who died in the menstrual huts. It is my hope that this film continues to break gender inequity, not just in India but in other parts of the world where women are banished just because they have their period. No woman deserves to feel invisible or worse, lose their life due to a lack of education, especially about their bodies.