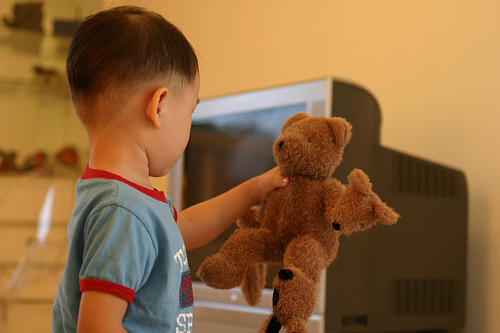 I read about this when I was pregnant, and to be honest, I hadn’t  really thought that much about it since. I was just taking it for granted that, as a parent, I would want my wee lad to be a balanced person who would get the opportunity to play with whatever he wanted to play with.

My little boy, who is now 10 months old,  seems to be a very happy little boy.  He is happy to play with most of his toys, and his favourite activity at the moment is to “walk” around the house pushing a kitchen chair in front of him. He has lots of toys, both cuddly toys and cars.

The other day we had a play date where a girl, who is also 10 months old, came to play with my little lad.  They didn’t play that much together, but they crawled after each other a bit.  And, they crawled over each other if one was in the way.  But, it was fun to see them interact a little bit. I was ever so proud when my little lad gave the little girl one of his toy cars! (It just so happens he was playing with a car, and I am sure it doesn’t really have an impact on the story I am trying to tell here, or does it?) Anyway, he likes the car, but it is nice and red, and the tires seem to taste very nice, as he has them in his mouth most of the time.

The interesting thing is (I am finally getting to my point) that the little girl was really interested in the teddy bears we have. I have just thought that my boy wasn’t old enough for teddy bears, as he has never shown any interest in them. Almost since he was born, I have put a teddy bear in his cot when he sleeps so that he wouldn’t feel alone, and there is always a teddy bear on the floor where he plays and in his toy-box (believe me, there are teddy bears everywhere, probably because I love them!).

But, he never pays any attention to them .  He just crawls straight past them, or sometimes he picks one up and then throws it away. But, this girl crawled straight over to one of the teddy bears, picked it up and cuddled it! (All very natural, but why doesn’t my little boy do that?)

I was talking about this with my father, as I seem to remember that I used to play with cars and trains when I was a child. What apparently used to happen was that my father would buy toy cars for me, but after a couple of minutes I would go back to playing with my dolls and other “girly” toys.  So, how much impact do I, as a mother, have on his development when he, at such a young age, seems to be (and I hate to use the word) a stereotypical boy? And does it really matter? I can’t force him to play with cuddly toys if he doesn’t want to.

So, what if your son likes dolls, or what if your daughter likes to play with cars? And, is it more accepted in society that the girl can play with what we think of as masculine toys, but not the other way around?  What do you do if your little boy decides that he would like to wear pink shoes to kindergarten? (A little note: in Norway the term kindergarten is the equivalent to nursery or daycare.)

I have a feeling that would be easier for me to accept than for my husband, but to be honest, I am not sure how thrilled I would be.  I am normally a very open-minded person (or am I?), so why do I feel uncomfortable with the thought of using pink clothes/shoes on my little boy?

Readers, what do you think?

This is an original World Moms Blog post by Asta Burrows in Oslo, Norway.  She can be found on her Facebook Page or on Twitter @AstaBurrows.

Photo credit to http://www.flickr.com/photos/starckting/243592533/.  This photo has a creative commons attribution license.