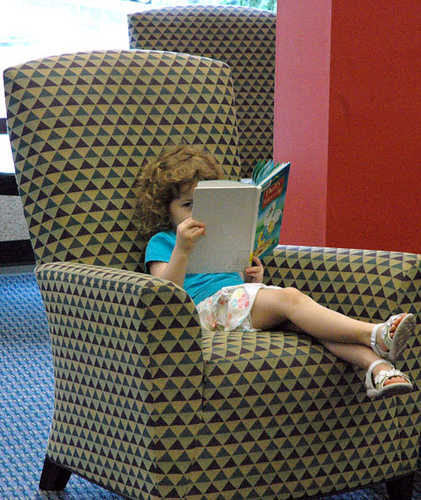 “What is the most requested children’s book in your house right now?”

And, here is how they responded…

“The Captain Underpants series by Dav Pilkey. Jokes about bodily functions get the boys every time!”

“Right now it’s a tie between two very sweet books. First, “The Giant Hug” by Sandra Horning about a little pig named Owen who sends a giant hug across the country to his granny (with a little help from the US Postal Service!). It’s a very sweet read for kids with family far away. A close second these days has been “Thomas’s Christmas Delivery” about, you guessed it, our favorite little blue tank engine and an urgent Christmas Eve delivery!”

“It changes often, but lately it’s been “Les Oeufs Verts et Jambon” by Dr. Suess. which is the French version of “Green Eggs and Ham”. I’m trying to raise my daughter bilingual in French and English, so we try to read as many French children’s books as we can!”

A. Roselyn of California, USA writes:

“For big girl, we read a lot of ballet themed books. Her current favorite is “Angelina Ballerina” by Katharine Holabird. For little girl, my favorite board book to read to her is “I Am a Bunny” by Ole Risom. The pictures are beautiful!”

“My boys are older but Caleb, my 9 year old, simply can’t get enough of the DIary of a Wimpy Kid series by Jeff Kinney. He bought the entire set at the school book fair, even though we have already read them.”

“Their favorites change all the time. Right now, “Don’t Forget to Write”, “Grumpy Cat”, “Sloppy Joe”, “Chicka, Chicka Boom Boom”, “There Was an Old Lady Who Swallowed Some Leaves”, and “Too Many Animals Sleep in My Bed”, are all on the top of the list. :D”

“James is obsessed with all aspects of Disney’s Cars, so naturally we have about a dozen Cars books.  One in particular is getting a lot of airtime – the one where Lightning McQueen discovers cave racing. George’s book requests are all over the map these days, but he tends to lean towards the “Brown Bear, Brown Bear” series.  I think he likes the rhythmic nature of the books.”

“My four-year-old daughter often requests “Bread and Jam for Frances” by Russell Hoban.  Frances only wants to eat bread and jam, so her mother gives it to her for every meal until she’s sick of it.  Maybe I should  use this technique on my picky eater…”

“It changes all the time, but a constant we alway come back to is “George & Martha: The Complete Stories of Two Best Friends” by James Marshall.  It’s a fun collection to read.  We’ll read five stories  at a time (they are really short), and then continue on with the next five the following night, and so on.”

Do you have a good children’s book recommendation?  Share it with us!

Photo credit to http://www.flickr.com/photos/komunews/3567108541/.  This photo has a creative commons attribution license.