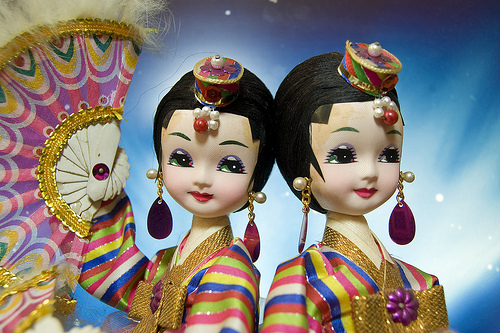 I’ve started to buy my daughter’s gifts for under the Christmas tree this year, and I’m on the hunt for fun things that will excite her imagination and curiosity about the fascinating world that we live in (short of actually jumping on a plane to a different country).  With this in mind, I’ve come up with a bunch of “around the world” gift ideas for children…

1.)  Maps. Whether its a fancy floor globe for an older child, or a laminated place mat for a younger child, there are a range of options to have the world at their fingertips for learning and to incite conversation.  I’ve found globe pillows for bedrooms and playrooms or wall sized fabric maps.  There are a ton of options for maps online and in stores depending on a child’s age and to suit a range of budgets.

2.) Around the World Dress Up Clothes. I thought this was a great idea for children that are still into pretend play.  Dress up clothes can be made for less at home (if only I was handy with a sewing machine) — a Japanese kimono, an Indian sari, a Scottish kilt — the possibilities are endless!  In the USA I found some available online at Lakeshore Learning.

3.) Foreign Language Books. I started teaching my daughter a second language by reading her children’s books in French (see article). Did you study another language at some point, but feel like you retain nothing now?  Chances are, if you had a children’s book in that language in front of you, you may surprise yourself that you can read it to your child.  And, you might even get better at it as the years go by.

There are many foreign language children’s books on good ‘ole Amazon.com, and the variety depends on the language and your location.  But, for a wider selection of French children’s books, I order from Canadian online bookstores like Archambault, too.  I’ve also had success with foreign language magazines for my older niece who is studying French in high school.  I’ve found topics that interested her, and she enjoyed picking out the cultural differences!

4.) Story Books About Different Cultures. From old African stories to learning about a country in South America, I like the idea of taking my daughter on a tour around the world just before bedtime every night.  In addition to local and online bookstores and libraries, I happened to have come across a site for these types of books on Growing Muses, a fellow WordPress blog.  Barefoot Books is offering a 15% discount for first time buyers if you use code SCSHFT.  (They have global themed puzzles, too!)

5.) Foreign Children’s Music. Whether it’s in the language that my daughter is learning, music from our heritage, or neither, I like to spice up our playlist with a new children’s foreign music cd.  There are many out there to choose from.  For example, one of our favorites for French is Charlotte Diamond‘s “Nous Sommes Tous Comme les Fleurs.”  She also has other CDs for children in English, French and Spanish.

6.) Local Global Adventure. An idea that I’d like to use in the future is to pick an ethnic restaurant that we’ve never been to before, and give my daughter an invitation to join us on an exploration of tastes of another land for dinner one night.  My plan is to start off by pointing out the country on the map and then do some research online together about the country and the types of food.  Then, we will pick a date and set out for our global family adventure!

7). Building Blocks or Puzzles of International Structures. Whether it’s the twin towers of Kuala-Lumpur, the Eiffel Tower of Paris or the Egyptian Pyramids, there are blocks or puzzles that represent structures such as these and may excite a child’s imagination about different places in the world!

8.) Handmade Jewelry or Crafts from Around the World. African beads or Middle Eastern bangle bracelets — oh my!  Giving a child a piece of jewelry (doesn’t have to be expensive) or craft that was made somewhere else in the world with a story behind it could be fun!  (Here, in the U.S., I happen to like to search the non-profit, 10,000 Villages, for global jewelry and unique crafts.)

9.) Toys with Global Themes. Whether it’s dolls in different ethnic costume, toy cars from different places on the globe, or toy planes representing different international airlines, these types of things may open up a child’s mind to other countries!

10.) Adopt an Endangered Animal in a Foreign Country. I have to do some research on finding a reputable charity that does this sort of thing, but one year I’d like to adopt a wild animal in my daughter’s name.  Not only will she maybe learn about a new type of animal species, but she will also learn about a new place, where the animal’s habitat is, on the globe.

Sometimes you don’t have to go very far to give your child the world.  I’m always looking for new ideas to open my daughter’s mind to other cultures and the broader picture of what this planet has to offer. Some of these ideas I have used, and some I hope to use in the future.  I hope you enjoyed them!

Do you have ideas for global gifts for children?  Please share them with us!

This has been an original post for World Moms Blog by Veronica Samuels, in New Jersey, USA.  Veronica can be found on her Facebook Page, on Twitter @Veronica Samuels or also contributing to Jersey Moms Blog.

Photo credit of Korean dolls to http://www.flickr.com/photos/kodomut/3504219964/. This photo has a creative commons attribution license.

Veronica Samuels has not received any kickbacks from the vendors mentioned and linked to in this post.  The 15% discount at Barefoot Books is available to all first-time buyers.  Veronica has come across all of these vendors, products and ideas through her own experience of searching for global gifts for her daughter.  Please shop at your own risk! 🙂