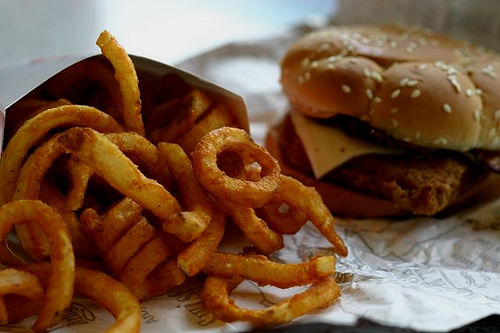 “When it comes to parenthood, is there anything you said you’d never do before you had kids, but later found yourself doing?”

Here’s what our World Moms Blog writers had to say…

“Before I had kids I said I would never let them put stickers on the car windows – I always thought it looked awful. Now? I see it as my child’s artwork.

“Oh gosh. I don’t know where to begin! Fall asleep with my baby in my arms, let my child sleep in my bed, let my daughter eat more than one piece of candy in a day, let my daughter watch too much T.V. I’m sure there are more, but I just can’t think of them!

Oh, on the other end of the spectrum, I definitely thought we’d have more family dinners during the week. The others above I can live with, but it’s the lack family dinners together because of my husband’s work schedule that I find disappointing. But, all we can do is try our best!”

“I always told myself that I would never use faulty logic with my kids, but sometimes we just have to take the path of least resistance. So I find myself saying things like:
“Because I’m your mother, and I said so!”
“If you don’t go to school your imaginary monster friend will have to go there alone, and he’ll be sad.”
“If you keep sulking your face will stay like that.”

“One day I told my son to “sit there and think about what you did.” After I said it, I burst out laughing at myself, because it sounded so old school. So much for reinforcing a message. However, it relieved the tension, and we were able to talk through the issue.”

“I swore I would NEVER take my kids to McDonald’s. I held off for several years. Not sure if it was a long road trip or the apple juice that swayed me, but regardless it did happen.”

What about you?  Is there something you said you’d never do, but you found yourself doing?

We’re off on Saturday.  Then, on Sunday we post next week’s travel itinerary, and we’re back on Monday — see you then!

Photo credit to http://www.flickr.com/photos/mrbling/42711932/.  This photo has a creative commons attribution license.