WASHINGTON, USA: Dancing to the Beat of a Native Drum 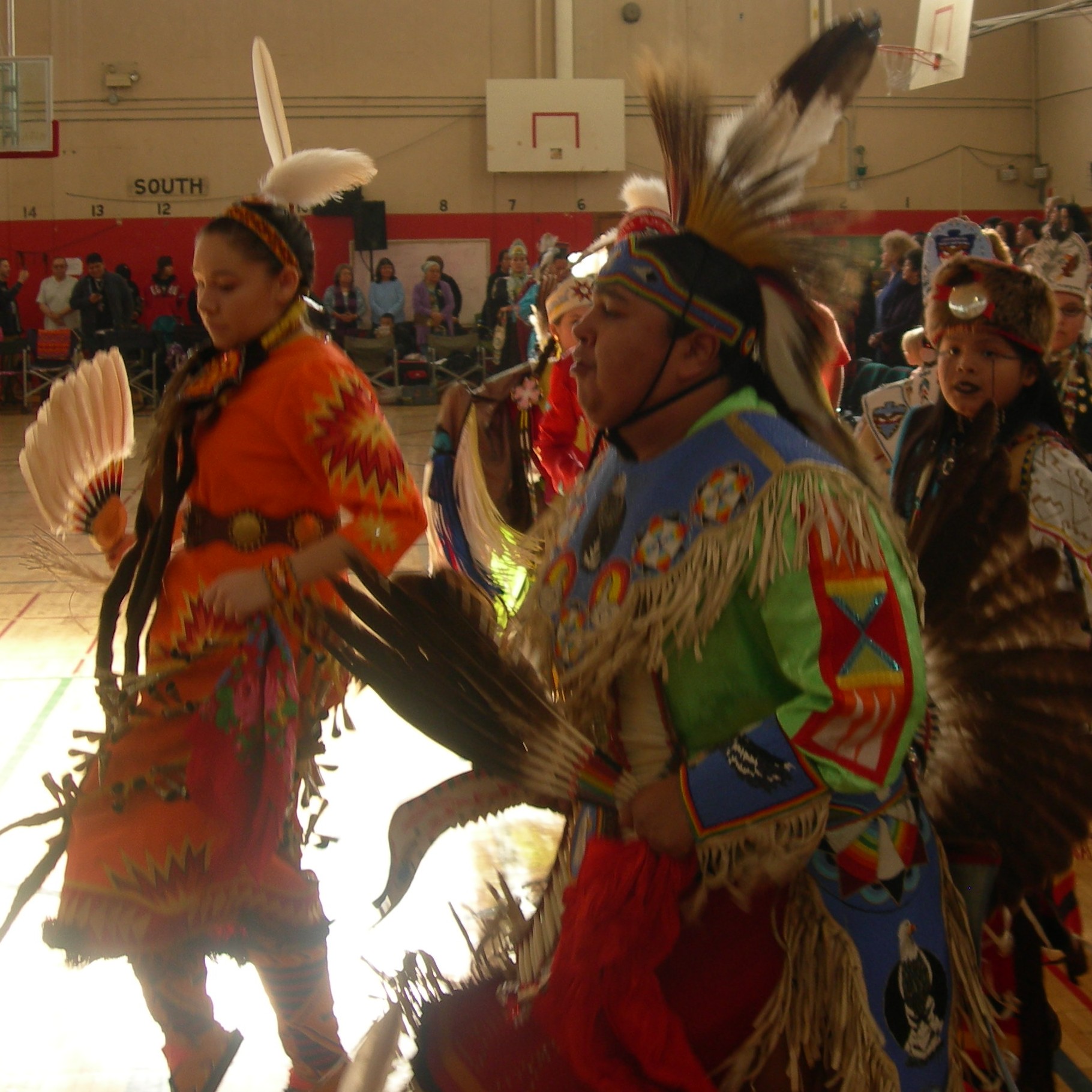 A few days ago my four-year old daughter informed me that one of her pre-school teachers is Native American.  I asked her how she knew about this, to which she responded that her teacher told the class.  Her teachers use a developmentally appropriate practice (DAP) framework (see more on this at http://www.naeyc.org/dap/faq) for teaching.

The topic of everyone being different and coming from different cultural backgrounds emerged after the class read The Crayon Box That Talked by Shane DeRolf.  Each family was asked to work on a family tree with their child and brought it in to share with their classmates.

(Check out the Global Grover Initiative for ideas on this – there are facilitator and caregiver guides).

As a child growing up, what I learned about Native Americans came from the history lessons in my school textbooks and Western movies – which was unfortunate because it made my perception of what American Indians should look like the stereotypical Native American wearing buckskin clothing and feather head dresses.  Back then I lived in New York City, and as ethnically diverse as my elementary school was, I do not recall having any classmates that identified as Native American…or if they did, I was not aware.

How odd, since according to the U.S. Census, New York City is home to largest urban Indian (American Indians who don’t live on reservations) population in the United States!

Serendipitously, a couple of days later I found out about a winter pow-wow being sponsored by the University of Washington in Seattle.  A pow-wow is a gathering to honor Native American culture.  It’s a time for the Native American community to socialize with family and friends and to remember their tribal traditions through drumming, dancing, and singing.

There are usually also Native vendors who sell their crafts (art, jewelry, clothing) and food.  I let my daughter’s teachers know about it, and they posted information about it on their bulletin board so that other families could participate if they wanted to.

In preparation for the event, I went with my daughter to the library, and we took out a couple of books, including Powwow’s Coming by Linda Boyden and Jingle Dancer by Cynthia Leitich Smith.  As we read about the dancing, my daughter got very excited – she has loved dancing since she’s been about a year and half.  The morning of the pow-wow my daughter was bouncing off the walls.  We ended up meeting up with a few of her classmates at the pow-wow, which I think made it even more exciting.

The pow-wow was held in the gymnasium of a school.  Bleachers and chairs were set up around the perimeter, leaving a big square in the middle for the dancers.  The Master of Ceremonies (MC) and the drummers were set up against the east wall (the front stage, if you will), with room for visitors and spectators along the other walls.  When we arrived ,we could see some elders and dancers lining up for the Grand Entry at the southwest corner of the gym.  (A pow-wow begins with a Grand Entry.)

These men were followed by the lead dancers, then the men dancers, and then the women and children dancers.  The regalia was beautiful!  There were traditional dancers, grass dancers, jingle dress dancers, and fancy shawl dancers (you could tell by the type of regalia they were wearing).  And the toddlers in their regalia were absolutely adorable!  How wonderful to teach them about their traditional dance and music starting from such a young age.

All the dancers marched to the beat of the drum, in a straight line along the perimeter of the square space designated for dancing.  Once they had all come into the gymnasium and walked around the square, the drumming stopped and the Eagle Staff and flags were placed at the front stage.  The man who carried in the Eagle Staff gave an opening prayer blessing, or invocation in both English and his Native language. 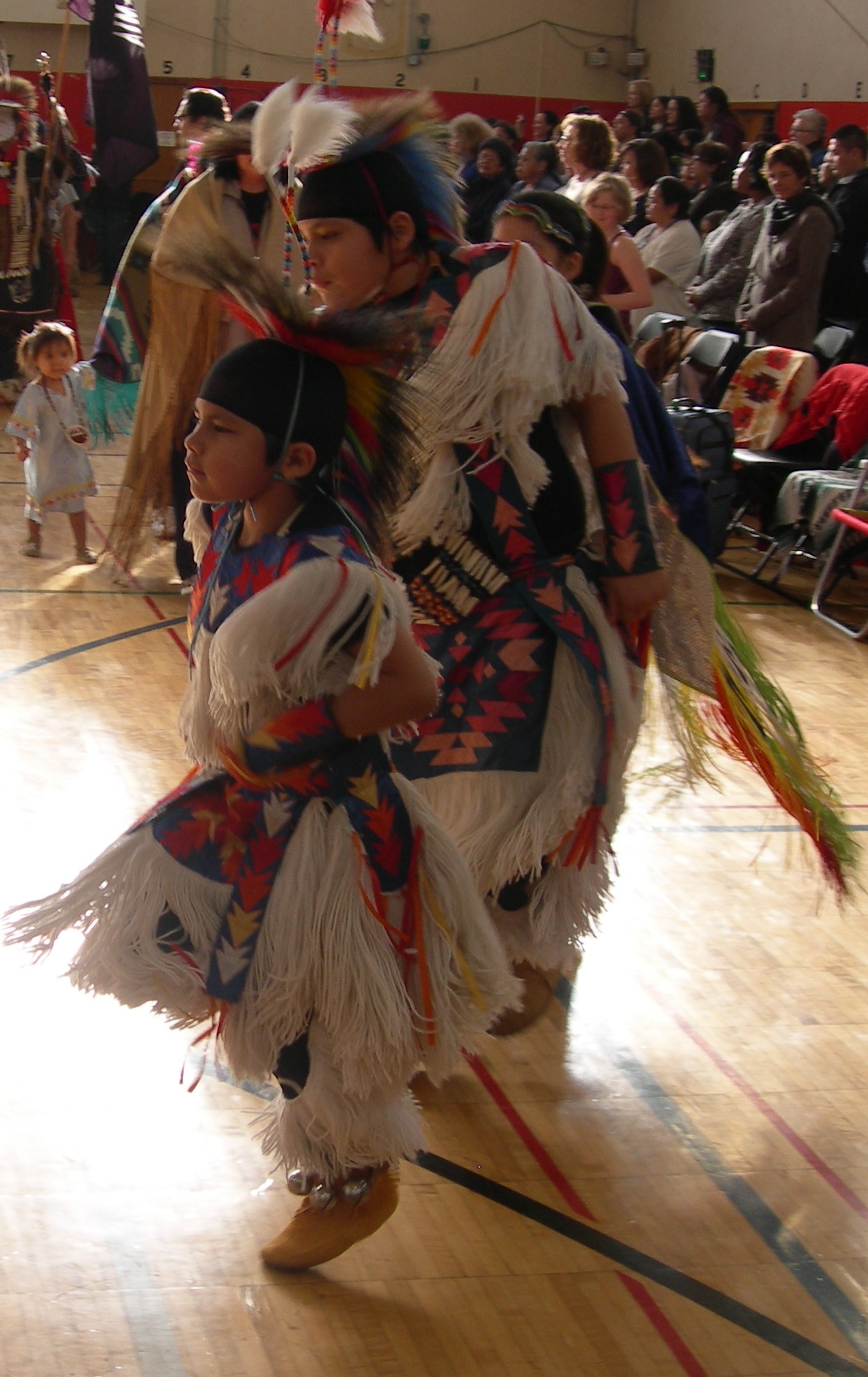 After that, the lead dancers welcomed everyone to the pow-wow.  They introduced themselves by their Native name, then their English name and stated which tribe they represented.  (There are about 30 Indian tribes and nations in Washington State.)

After the introductions, the MC invited the dancers, and anyone else who wanted to join in, to dance as each of the drums took turns drumming for about five minutes each.  The drums, which provide the music for the pow-wow, are large (about 2-3 feet tall and 4 feet wide) and have about 4-6 drummers each.  My daughter and her friends were thrilled to have the opportunity to dance – they jumped right in!  After about 45 minutes, they came to report that they were tired, thirsty, and a little hungry.  We took that as our cue to head over to the vendors for some food…where we got some delicious fry bread with jam.

I think it is important for my kids to grow up with global awareness about different people and places.  I  am excited and grateful that my daughter and her classmates had the chance to learn about another culture through this “hands-on” exploration and hope to be able to facilitate many similar opportunities in the future.

What cultural learning experiences have you been able to share with your child(ren), and how were they received?

This is an original World Moms Blog post by Eva Fannon in Seattle, Washington.  Eva can be found on Twitter @evafannon.