NYC: Too Close for Comfort 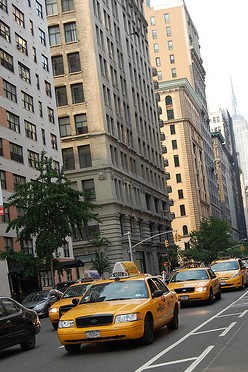 As any Manhattan dweller will tell you, living in the Big Apple can’t be beat.  Culture, parks, restaurants, and all sorts of excitement are all right in our backyard. (Well, we don’t actually have backyards, but I digress).  The one big drawback?  The size of the living space!

After all, because 1.6 million of us have decided to inhabit this 22 square mile island, something’s gotta give!   I know, this is not the only place in the world where people cram themselves into a metropolitan area, but for me, the space issue can, at times, be a real issue!

We live in what is known in NY as a “junior four” apartment—basically, it’s a large one bedroom with a dining alcove that can be converted into a second *small* bedroom.  Before Chase was born it was a perfect set up. When we bought the apartment we had a different lifestyle–we actually had space for dinner parties and the occasional houseguest!  Now there is a train table where the bar cabinet once sat, so as we all know, things change!

We always planned to create the second bedroom but we didn’t fully understand what it would be like to have an actual person with finely tuned hearing living in it!

When Chase was younger he had to be rocked (rocked and rocked  . . . .)  to sleep.  It was such a process to get him down, and then one little noise from outside his room and: “waaaaahhhhhhhh”, I had to begin the process all over again.  He still wakes up from too much outside noise and he’s almost 3!

A few weeks ago my husband was cleaning up the toys in the living room after bedtime and Chase shouted “Daddy, why are you playing with my toys?  Its sleepytime!”

The fact that his bedroom is right next to our kitchen and adjacent to our now dining room does not make life after bedtime very easy.  While he’s sleeping, we have taken to opening any soda cans in the master bathroom (bedroom and bathroom doors closed) and all phones are sequestered in our bedroom after 8pm.

But, we soldier on!  So, we keep the place quiet after bedtime and during naps; it’s an inconvenience, but not a deal breaker for us.  When Chase was first born and I was working, we looked into moving to a normal-sized house outside Manhattan to be closer to family.  The thought of having the extra space was definitely appealing, but we decided staying put was the best choice for us then.

We have had some people question whether this is the best decision for our son.  After all, he has no back yard.  He doesn’t have a huge basement filled with toys, and he really doesn’t have much place to run around inside the house.  These are all true statements.  However, we (mostly me!) go out of our way to take Chase to the local parks and playgrounds whenever we can.

We go to indoor play spaces and have a playroom in our building for days that the playground is not an option. We do not have a lot of space, but we try to make the most of the city where we live.  I take Chase to the Metropolitan Museum of Art or the American Museum of Natural History at least twice per month.

Even before we were parents we decided that spending time with our kids was the first priority, and I am happy that we’ve been able to stick to that decision so far.  My husband’s commute is two stops on the express subway line and he’s home for breakfast every morning and usually makes it back for a bedtime kiss each night. When it’s time for kindergarten we’ll have to reassess whether this is still the right fit for us.  Until then, we’re sitting (very) tight in our little junior four!

What’s a typical family dwelling like in your part of the world?

This is an original post to World Moms Blog by Allison Charleston of NY, USA.  Allison is our city-dwelling, attorney-gone-stay-at-home mom!

Photo credit to http://www.flickr.com/photos/poldavo/2563078724/.  This photo has a creative commons attribution license.