UAE: Orientalism and Slipper Socks–Lessons at the Nail Salon 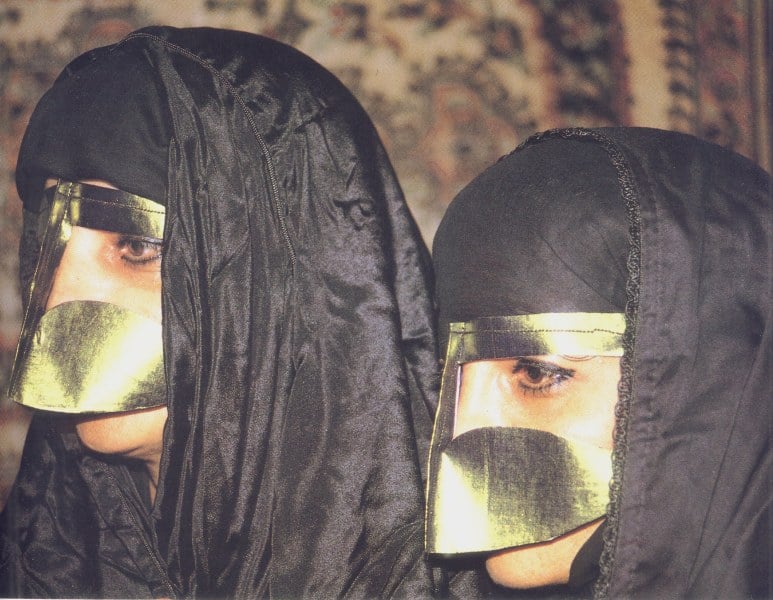 It’s 2013, a new year and of course the air is full of portent: new beginnings, fresh starts, gleaming resolutions to become perfect by February, March at the latest. Gyms throng with new devotees, yoga classes bulge with folks suddenly in need of a little down-dog enlightenment.

2013 marks the beginning of our second year in Abu Dhabi: we moved here in August 2011, so we are slowly becoming accustomed to the rhythms of expat life. My younger son, for example, when we returned to Abu Dhabi after spending the holidays with family in Manhattan, said “basically we just have two homes even though we only have one apartment.”  That’s as good a summary as any: we no longer have an apartment in New York, so we’re always sort of perching–a rental, a hotel, someone’s house–and yet New York will always be “home.”

I’d thought that by now, sixteen months into our Abu Dhabi adventure, I’d have gotten further below the surface of this city but I still feel like I’m floating. It’s a city that allows the float: English is the common language, there are people from every country imaginable walking the streets, I don’t have to cover my hair or my skin to go outside, bacon and liquor are readily available even though they are forbidden to Muslims.

It’s easy–too easy–to remain an outsider, a guest. The closest I get to peeking inside Emirati culture these days is visiting the nail salon, which is a “woman’s only” enclave. If a man wants a little mani-pedi action, he’s got to go somewhere else.  Inside the nail salon, women push their veils off their hair, undo their face veils, chat to their friends and on their phones, and wiggle their toes in bliss. Every time I get my toes done, I wish I’d tried harder to learn Arabic–and if this post were going to be about resolutions, that might be one: to go back to my Arabic lessons. Is learning a language in order to eavesdrop a reasonable motivation?

What the salon forces me to think about, however, is how easily I fall into the trap of seeing “them” and “me.” Despite myself, I fall into Orientalist attitudes: those women swathed in black, mysteriously veiled are so exotic, so different… There’s no way their conversations could be like mine or the women I overhear at the salon in New York, right? These “exotics” aren’t talking about kids, husbands, family, television, politics, or choosing between the peach or the coral. Nah.

Before the holidays, I was at the salon, indulging in a foot massage and a little Orientalist eavesdropping, and I saw a woman there with an older woman who was perhaps her mother or grandmother. The younger woman was in the typical black abaya, but the older woman was wearing something that was once common in this region, but is now pretty rare: 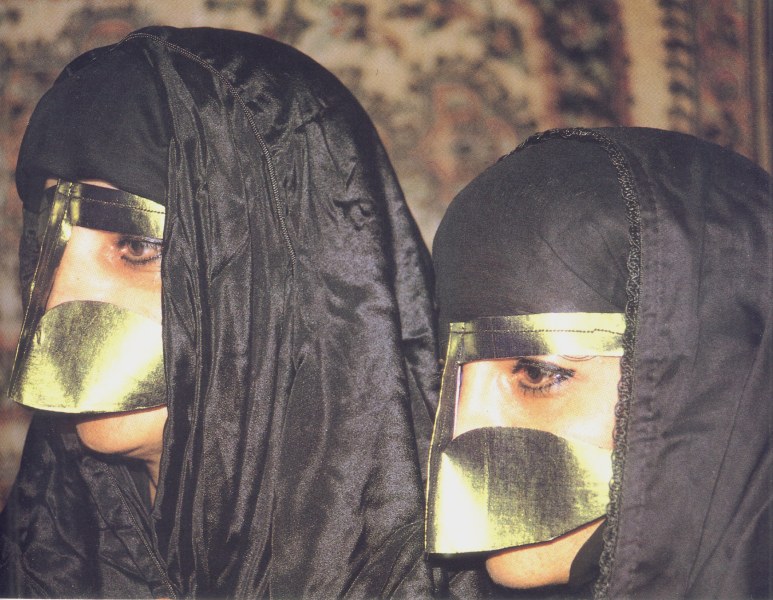 This face mask looks like it’s made of leather but it’s in fact made of stiffened cloth. I’ve heard it called a burqa, or a batula, and while I’ve gotten more or less used to the face veil, the batula gives me pause. It looks a bit like a cage; it’s the most exotic of exotics, terribly alien.

So I’m watching this younger woman, wrapped in her black robes, and I’m glancing at the old granny, in her black robes and coppery face mask, and I’m thinking, wow their lives must be so different from mine, what’s their story, we must be worlds apart, that’s what we are…

Then I noticed that the younger woman wore no make-up, carried no fancy hand-bag, and peeping out from under her robe were a pair of grubby, well-used running sneakers. Not so different from how I looked, if you substitute worn-out Birkenstocks for Nikes.  I watched as this woman knelt in front of her granny, who clearly seemed infirm, and with the help of the salon attendants, helped granny slide her feet into her “exotic” footwear: 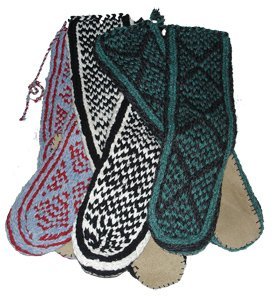 Yeah. Really alien. Slipper socks, like you can get from LL Bean or Land’s End, those notorious purveyors of exotica. If you think about it, slipper socks are the perfect footgear for an old granny to wear if her feet are swollen and she lives in a country where it never rains (but everything is air-conditioned to the hilt).  Granny pushed her henna’ed feet into her purple-stitched slipper socks, and stood up, gripping tightly to the younger woman’s arms.

Out they walked, taking my Orientalist assumptions with them.

Resolved: to look past the masks and imagine myself in someone else’s slipper socks, to see the differences but not be blinded to the similarities.

Photos credited to Tumblr and HelloTrade.com.