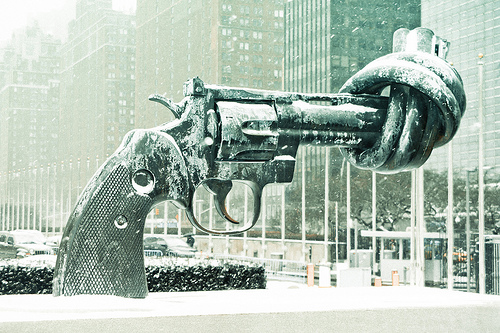 As people across the world ask why – why on earth would someone do this? – in many places people are asking why this young man had access to weapons that could fire 6 bullets per second.

What possible reason could a person have for owning such weapons and why would they be legally permitted to do so?

As an American by birth I have asked myself these same questions many times. I’ve witnessed my homeland torn apart by mass shootings over and over again. Each time there is an outcry, an argument over gun control, a conversation about the state of mental health care, but nothing changes.

Hunting is not a common sport here, but those who are issued licenses for hunting weapons must store their guns at their local police station once hunting season is over.

Fans of Korean cinema may have noticed that characters, even the bad ones, do not carry firearms.

Many Korean women can grow up and live their whole lives without ever seeing one in person. (Military service is mandatory for men in Korea, so most of them have handled a firearm during that time)

There are many things that can be said, both, positive and negative, about living in Korea but one thing is for sure – I have never felt safer in my entire life. I live in the second largest metropolis in the world alongside a staggering 24 million people, and I am never fearful for my personal safety. Ever. To me, feeling safe in my environment is true freedom.

The reasons for my feelings of safety are varied and not limited to the restrictive laws surrounding gun ownership, but they are important to note because they stand in glaring opposition to the cultural norms in the United States. For one, Koreans have a mentality that can best be described as all for one and one for all. They are completely committed as a society to the common good. What hurts one person hurts everyone. Compare this to the idea of individual rights above all else.

Secondly, yes, restrictive gun laws. Knowing that a person simply cannot get their hands on a weapon that could quickly and indiscriminately kill scores of people makes me feel safer as I walk the streets of Seoul. And third, it is my opinion that the memories of the violence that has touched this peninsula in the not-so-distant past serves as a moral touchstone, a reminder of how important it is to cherish safety and security and to create that environment for one’s citizens by any means necessary.

Although America has been involved in two wars for 10 years, and many more before then, very few of us have actually seen the horror of war. Only 1 percent of the population serves in the military so it is also possible that many of us do not even know anyone who has served. There has not been a war fought on American soil for a very long time, and there is no one alive today who could tell us about it. Contrast that to here in Korea, where everybody knows or is related to a veteran of the Korean War. To this I would add that the mandatory military service forces a familiarity with weapons and war that perhaps satisfies any curiosity that may be lurking in the mind of a young man.

In the US we glorify war and violence through movies and video games and the like, but the fact is that few of us have actually experienced it in any meaningful way. Perhaps owning a gun makes a person feel big because they have this fantasy that that is how a soldier might feel. I can say with absolute certainty that most soldiers who find themselves armed in a war zone do not feel safe or free and would give anything to be home without the need or want for a rifle.

Yes, there needs to be another national discussion in the US about guns, but not just guns. Also about violence and gore and what it means to be a good citizen. A second and third and fourth and fifth look needs to be taken at how we manage mental illness. We cannot stop looking until we get it right. And we need to ask ourselves if we really are willing to keep allowing children, defenseless innocent children, to pay the price for adults to own weapons that do not make any of us any safer.

As much as I personally wish it to be so, I know that in America there will never be a law prohibiting gun ownership outright. That’s fine. I don’t need the laws in the US to reflect my personal politics. But we do need to reinstate the ban on assault rifles. Not months from now, not after long arguments – now. We cannot ask another mother or father or grandmother or grandfather or brother or sister or aunt or uncle or cousin to withstand what is happening to the family members of those killed in Connecticut.

What are your thoughts? Tell us what country you are from and whether you feel safe, or not, where you live!

Photo credit to Luke Redmond.  This photo has a creative commons non commercial no derivatives license.