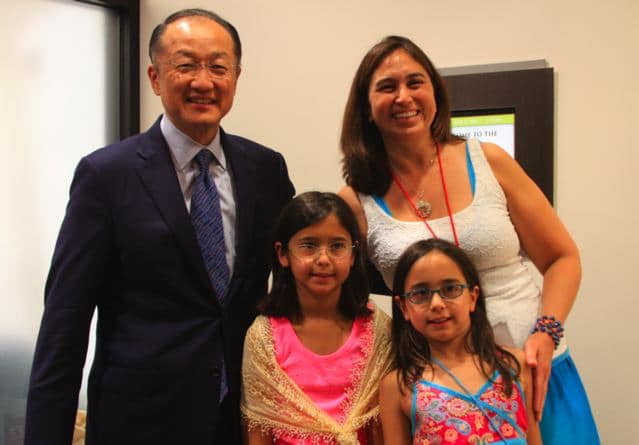 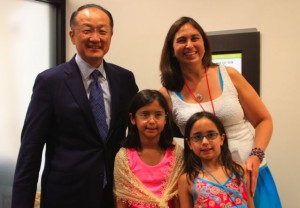 What is the World Bank and what does it do? If you ask an average American, you’ll likely get a blank stare or a wild guess. “Is it like when we played Monopoly as kids and one person got to hand out all the money?” quipped Mackenzie Astin on Vox Populi Radio recently when host Sean Astin tried to explain it to him. “It’s probably where all the countries keep their money,” said my 8-year-old to her sister. Whatever the answer, you’ll usually not hear “they fight poverty” as a first guess, but that’s exactly the key to what an everyday person should know about the World Bank.

While attending the 2014 RESULTS International Conference in June, my daughters and I had a chance to meet World Bank President Dr. Jim Yong Kim moments before he took the stage for an interview in front of hundreds of RESULTS volunteer activists who work every day to end poverty. While we awaited his arrival, I had time to reflect on the role of this man and the World Bank on what kind of world my kids will inherit from my generation.

The World Bank is a United Nations financial institution that provides loans to developing countries. Yet it’s not a bank in the ordinary sense. It’s a partnership that exists to reduce poverty and support development of impoverished nations. Imagine that…a bank with a mission to fight poverty! It provides low-interest loans, interest-free credits, and grants to developing countries to fund programs like education, health, agriculture, and environmental resource management. Where does the money come from? Donor countries, banks, multilateral institutions, and private sector investors all contribute to this vital source of financial and technical assistance to developing countries around the world.

Dr. Kim’s audience cheered wildly that day, holding signs saying “We love the World Bank” because they knew he was going to re-assert the World Bank’s mission end extreme poverty by the year 2030. In fact, the World Bank has set two goals for the world to achieve in that time:
1.    End extreme poverty by decreasing the percentage of people living on less than $1.25 a day to no more than 3%
2.    Promote shared prosperity by fostering the income growth of the bottom 40% for every country

Wow. That’s only 14 years from now. In 2030, my 10-year-old will be 26 years old. Is it possible that in their adulthood, my children could live in a world without extreme poverty? Will they actually have to explain to their children what it was like when millions of people struggled to live on less than $1.25 a day because that kind of suffering won’t be found on the news?

Dr. Kim spoke of his belief that we should focus on the moral imperative to end poverty and shoot for big goals even before we precisely know how to get there. He said our attitude should be “balancing between moral reasoning and the humility that we may not have everything together…but going for it anyway because it’s the right thing to do.”  Helping to save lives and educate children is a goal in itself. Plus, evidence for economic benefit of poverty elimination has now caught up with the ethics. For instance, 24% of economic growth is due to better health outcomes. We also now have evidence to show that education is not just nice to have…it’s necessary for growth. So, we should not be afraid to set the incredible goal and then work backward and say, “To achieve our goal, what kind of organization do we need to be to meet that?”

Is Dr. Kim an idealist? Yes, I do think so, but he’s an idealist in the very best way. He has a grand vision of what is possible coupled with a practical leadership style revealed in his insistence on “results based financing.” He wants the World Bank to focus on impact on the ground rather than getting money. When we can report incredible results like a neo-natal mortality drop in Argentina of 74%, donors witness what is possible and invest more.

The path Dr. Kim describes toward the end of extreme poverty is in no way easy. For one thing, it requires confronting the status quo and our assumptions about what works. We need to ask tough questions of organizations providing services, like, “Are you where the poor people are? Are your clinics convenient for you or for the people in poverty who you serve?” The World Bank has a critical role to measure and release regular data about poverty using sophisticated techniques so that we can make great decisions, inspire more funding, and get great results.

In summary, he concluded for us,

“We are not a hard-hearted organization just focused on increased GDP. We are dedicated to ending poverty and making sure that everyone participates.”

All in all, I feel extremely lucky. I feel lucky that I had a chance to meet a man of such vision. I feel lucky that as an advocate for global health and education in this era, I – personally – have a role in bringing about the end of extreme poverty. But most of all, I feel very hopeful and fortunate that if we work together with leaders like Dr. Kim, my daughters will see the end of extreme poverty within their lifetimes and millions more mothers will see their babies grow to be as strong and healthy as mine.