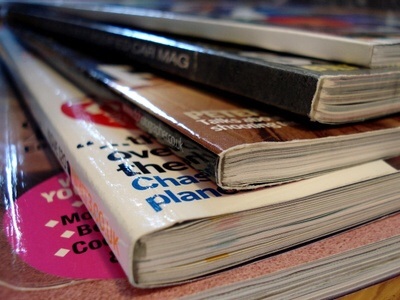 I made a mistake this week, and bought a Women’s Magazine.

I know, I know. I have only myself to blame. Turkeys voting for Christmas, and all that. I haven’t bought one for so long. I’ve been doing really well. But then. Oh then…

In my defence, it looked so – fun. So cheerful and chatty and colourful.There were healthy recipes inside, it said. And – I admit – my eye snagged on a headline about summer dresses.

So I picked it up. I was at the cash till. It only took a moment to grab it, bleep it, bag it. And before I knew it, I was driving home with it.

At home I unpacked everything else first, aware of the magazine in its untouched bag as much as if it was emitting a radioactive glow. I made myself work slowly – stacking the tins of beans straight, organising the refrigerator drawer. Then I called my children and gave them snacks, and sent them out into the garden to play.

After that, I made myself a cup of tea, as though I had nothing particular planned. And then – and only then – I took the magazine out of its wrapper, and sat down to read it.

The first couple of pages were harmless. Or at least, they were nothing I couldn’t handle. Adverts, mainly – twenty-somethings draped in overpriced clothes that could only look good on them. Nothing to see here. Then a couple of placements for age-defying face creams. I read a few lines, caught myself, and moved along again.

The next page provided an unexpected giggle: beneath the legend “Coolest hot-weather buys”, an exhortation to try the latest offering from a diamond company – some sort of twisty ring from just £1,950 ($3,320) each. I made a mental note to ask my husband what he thought when he got in from work, just for laughs.

The next few pages provided tidbits on shoes, celebrity tattoos, and the new King of Spain. I flipped faster, half-aware that my kids’ voices below the window had taken on the whine that suggested some immense unfairness was about to be brought inside and laid at my feet. Sort it out between you girls, I urged them mentally.

Then I turned the page and found an article on being skinny.

I tried to turn the page but I couldn’t. My eyes were fastened on the headline: The Disturbing Rise of the Triple Zero.

Somewhere at the back of my mind, a protest went up: Damn it! Suckered again!

Still, I read on.

So disturbing was this new trend for extreme, extreme thinness that the magazine had devoted four pages and fifteen photographs to it, along with such insights as: “It’s no secret that stars can make headlines out of being scarily skinny” (Um, Q.E.D., I think.)

I read the whole article, wanting to stop the whole time. I felt like I was standing in front of my kitchen cupboard in the middle of the night with a jar of chocolate spread and a spoon. Stop it, I told myself. It’s not good for you and you know it. Also, it’s making you feel sick.

I could hear my girls coming inside now. I pictured them arming sweat off their foreheads and tugging off dirty sneakers; saw their strong young shoulders and sinewy legs. In front of me, female skeletons struck ghoulishly sexy poses while the text explained how new ‘skinny apps’ can slim photos for Instagram by five to 15 lbs.

I realised as I read that I was thinking back to my lunch, to my breakfast, to dinner the night before, computing how much I had eaten and how many calories it might have amounted to.

Then a hand landed on my shoulder and I jumped, guiltily.

“Mu-uuum,” Betty began, flushed and aggrieved. In the other room, Grace called out a preparatory defence: “I didn’t!”

I turned to my five-year old daughter while simultaneously turning the page of my magazine. She wasn’t fooled.

“Nothing.” (The line that never works.)

Betty grabbed the magazine and pulled, and my heart thudded with horror until I saw that on turning the page I had moved us along to a feature on – ha! – learning to be brave.

“It says how you can be brave.”

Later, when the girls had gone to bed, I threw the magazine in the bin. I felt immediately braver. And healthier. And saner.

If only there was an app for that.

Thus is an original post by World Moms Blog contributor, Sophie Walker, of the United Kingdom.

Photo credit to Ian Mackenzie. This photo has a Creative Commons attribution license.