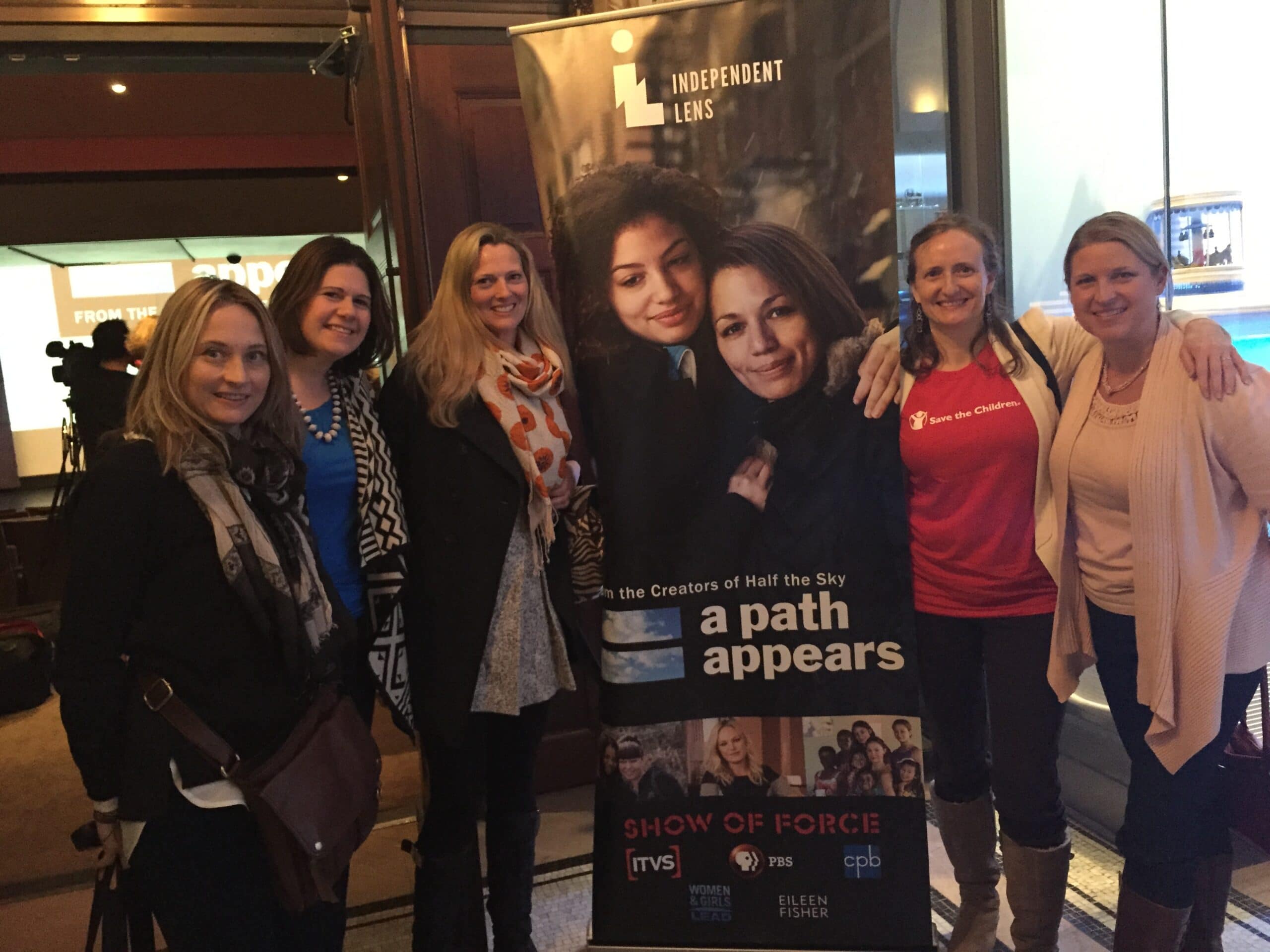 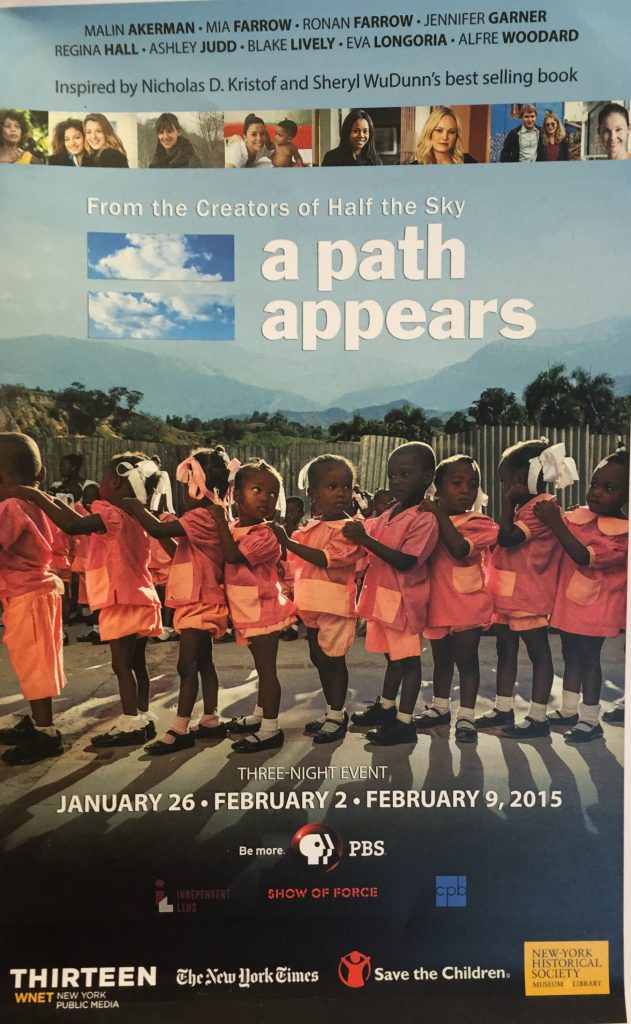 #WorldMoms were thrilled to be invited by Save The Children to the preview screening and discussion of the new Documentary A Path Appears, Executive Produced and Directed by Maro Chermayeff, this past Thursday in New York City. The film is based on the book by the same title by Pulitzer Prize-winning New York Times journalists Sheryl WuDunn and Nicholas Kristof.  World Moms Founder Jennifer Burden, Senior Editors Kyla P’an and Elizabeth Atalay, and special contributors Maria Mostajo and Polly Palumbo attended the event held at the New York Historical Society.  A Path Appears will air in the USA on PBS three Mondays in a row, starting tonight. 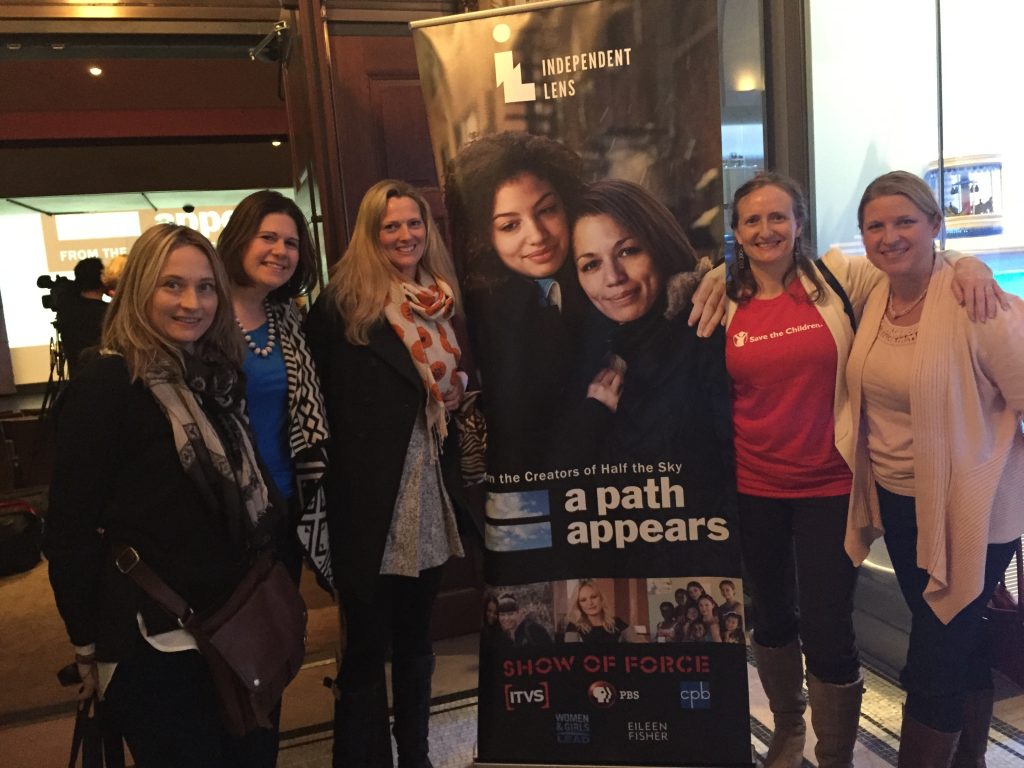 The first segment that airs tonight focuses on sex trafficking in the United States and uncovers the raw truth of its prevalence and pervasiveness in American society today. An estimated 300,000 children are at risk of being trafficked into sexual slavery, and according to Nicholas Kristof a startling 10% of men in the USA buy sex online. The film points out the sad fact that most of the victims of sex trafficking are runaways, and the reality that often when a low income kid goes missing the first ones looking for them are the pimps. This powerful film gives a truly eye opening, and heart sinking look into the reality of the varied demographics  involved in the human trafficking industry in this country, and highlights the need to prosecute the pimps and Johns perpetuating the industry, instead of the prostitutes who are actually the victims in it all.

As part of the Women and Girls Lead initiative, through heartrending, inspiring storytelling A Path Appears will take viewers on a journey across the globe, to drive home the universality of gender inequality and the roots of vulnerability. The series will lead viewers to a deeper understanding of these critical issues and the proven methods of bringing about change.-PBS Independent Lens

Save The Children, our hosts of last Thursday’s event, and one of the sponsors of the program, kicks off the film’s 2nd episode, “Breaking the Cycle of Poverty,” which will air next Monday, Feb. 2 at 10 pm on PBS.  That episode will feature Save The Children’s early education program that we covered on World Moms Blog in an interview with Save The Children Artist Ambassador, Jennifer Garner in 2014. In the film Nicholas Kristof travels to West Virginia with Jennifer Garner to report first hand on the home visits that are so effective in literacy early intervention.

Early education is the best investment to break the cycle of poverty in America. All children deserve the chance to succeed in school and life. — Save The Children

Save The Children’s call to action is to sponsor a U.S. child which helps to provide home visits to pregnant moms, infants and toddlers, and elementary school literacy programs in some of the poorest, most isolated communities the nation.  The earlier we reach children the better, and in fact, research shows that reaching babies under the age of 2 has the greatest affect on high school graduation rates and crime according to the book, “A Path Appears” by Kristof and WuDunn. The types of visitation programs that Save the Children provides for mothers of babies under 2 years old are underfunded, yet breaking the cycle and teaching mothers how to read to their children, and interact with their babies emotionally, is proven to be effective.

The third episode will take viewers into the largest urban slum on the continent of Africa, Kibera in Kenya. There viewers see the amazing story of transformation inspired by a man who grew up in Kibera, and founded Shining Hope community programs and a school for girls with his wife. The positive impact of which is rippling through the community.

We hope you will join us in watching this important documentary series, and that the world is inspired to action by the powerful stories told within. 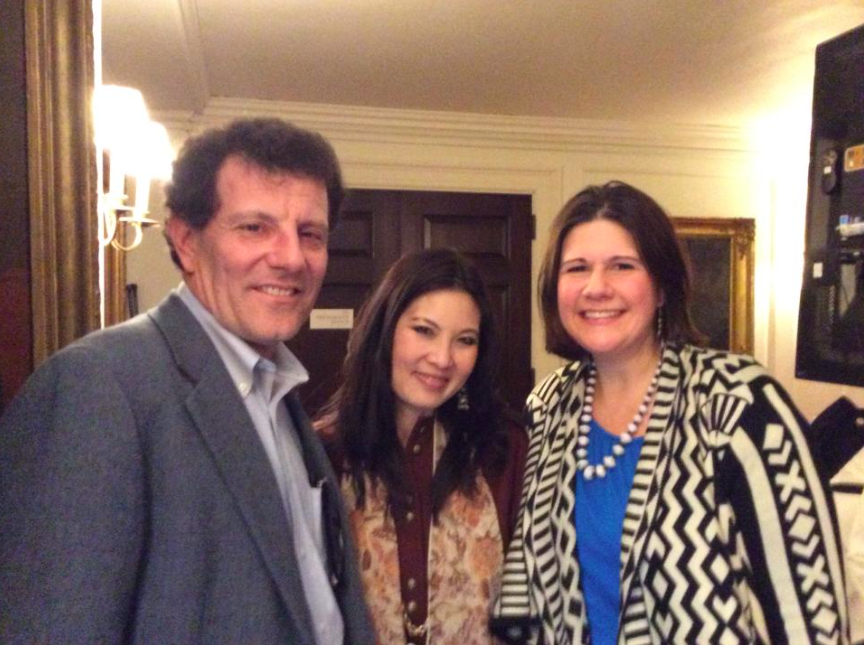 This is an original post to World Moms Blog by Senior Editor, Elizabeth Atalay of Documama.

Photo credits to World Moms Blog and A Path Appears.