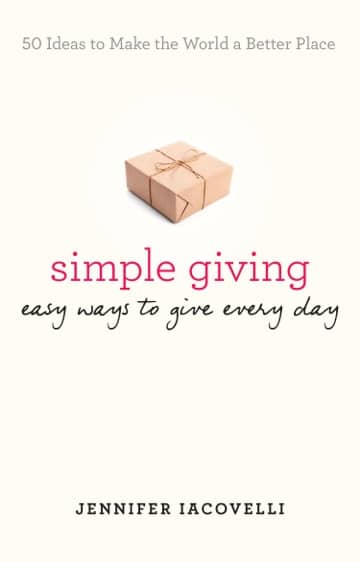 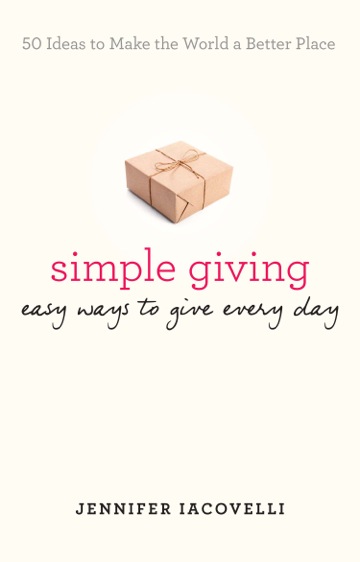 In a little over four months, my book will be out in the public in paperback and electronic forms. It gives me chills to think about this fact.

It is a lifelong dream to publish a book, and I’m excited to accomplish this goal before I turn 40. (I’ll even have a few months to spare!) While I am a co-author in the book The Mother of All Meltdowns, this will be my first solo book. It will also be my first traditionally published book.

I honestly don’t remember when I initially came up with the idea for Simple Giving. Let’s just say it was a few years back. I know that I wanted to take what I was writing about philanthropy on my blog, another jennifer, and expand on it. I know I felt a constant pull to give more and to share all the stories I was finding through the Philanthropy Friday series on my blog in a bigger way. I know I found a community of world changers that spanned the globe who inspired me to push myself further.

I finally got the nerve to ask my then father-in-law and seasoned literary agent if he thought I should pursue my idea. He not only liked the idea, he offered to represent me.

You never know what will happen with your goals and dreams if you don’t pursue them.

It took me a long time to finish my proposal, never mind the actual writing of the book. When you work on something so close to you personally, fear can often rear its ugly head and get in the way of your progress. Other priorities – like work that actually pays, writing, parenting and attempting to have a social life – push the big scary stuff to the back burner. I wrote a post back in March of 2013 about fear and writing.

There were a couple of times that I just had to get away and write without distraction. I was fortunate enough to have my parents take my kids for days at a time so I could retreat from the world and immerse myself in my book. Those were the times I got the most research and organizations done, along with some much needed free writing.

And then I came to the realization that my marriage was ending. After one Sunday evening conversation, reality set in. I woke up the next morning feeling a shell-shocked. I remember getting my boys off to school and sitting down at the desk in my home office. I started the computer and stared at the screen wondering what I would do next. A million things were running through my head.

I opened my email and there, waiting for me in my inbox, was a draft contract from my publisher. I had known it would be coming for a few weeks, but the contracts department was backed up. It came at a time when I needed the reassurance that everything was going to be alright. Just a few weeks later I traveled to Nicaragua with WaterAid America. I was nervous about leaving my kids so soon after telling them that their father and I were separating, but that trip came at a time when I needed to get away and get back to basics.

While I can’t say that everything went as planned in the writing of this book, I can say that it all worked out for the best. Simple Giving is much better because of the extra time it took and the experiences I had along the way. In fact, the story that brings the entire book together is about a wonderful community I joined after divorce – that also happens to be my gym – that allowed me to bring my passion for global issues into an outdoor water-themed workout based on my experience in Nicaragua for World Water Day in Maine.

Maybe there was a plan after all.

Simple Giving is available for pre-sale on Amazon, B&N, Books-A-Million and Indiebound.

This is an original post written for World Moms Blog by Jennifer Iacovelli, of anotherjennifer and author of Simple Giving.

Is there a dream that you have but are afraid to pursue?