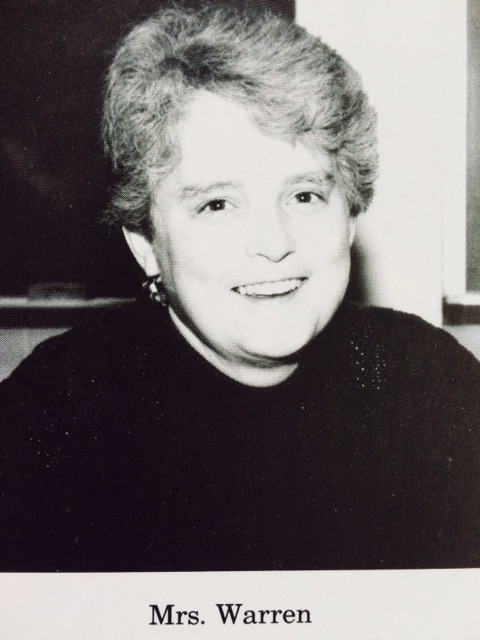 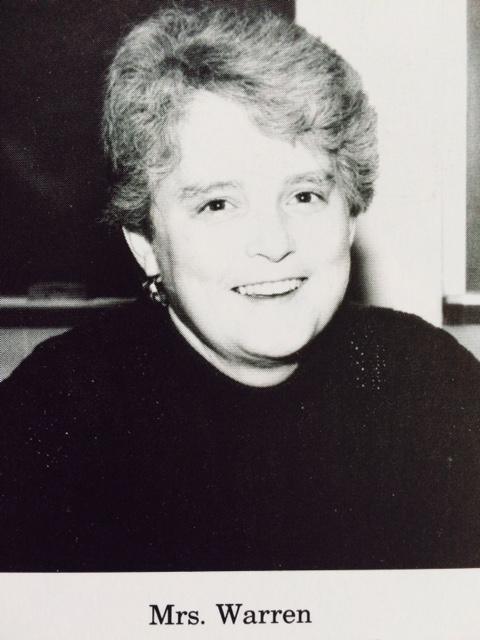 One day this spring, after taking the kids out to dinner, I checked my Facebook feed before I set out to drive home. I saw the news that my high school French teacher, Mrs. Warren, had passed away.

I began to drive home, and I felt such an emptiness, and I began to cry. I hadn’t seen Mrs. Warren since I graduated high school in 1994. That was 21 years ago. But, the impact she made to my life was so grand that I didn’t realize that there was a part of her that was always with me.

Mrs. Warren was an amazing French teacher. However, her greatest impact was not what she taught us about French, but what she taught us about life. For me, she was a teacher who peeked through hypothetical doors with her students, and said, “Look what is possible!”, and then said, “Go do it!” She listened to us, and she knew that we all had different wants and needs.

I remember that Mrs. Warren had a husband and two sons who she loved and spoke about very much and who were very into camping. So ironic because she, herself, belonged walking the streets and museums of Paris.

Every year she arranged to lead a bunch of school kids to France after school let out. She treated us all like her own. In the 1990s we had lectures at every step of the way: about the value of the Franc at that time compared to the dollar, our safety and what not to do and what to do in the French culture. She went over everything and then set us free to make our own decisions.

She led us up to the top of the Eiffel Tower and as much as she treasured the view, she seemed to be more excited about us seeing it for the first time.

Before this trip, I had only been on an airplane once to go to Florida and my parents had never been out of the country at that time. Mrs. Warren extended our boundaries. She taught her students that there was life outside of Brick, New Jersey, USA and how fun and interesting it was to explore the world!

The next year, after having exhausted my summer job savings on the trip to France, Mrs. Warren told her class about a scholarship competition from our town’s Board of Education for a summer foreign exchange. Since I had already been to France, I chose Japan because I yearned to see more of the world, and it was the country I knew the least about on the list. Everyone else who was applying chose a country which coincided with a language that they were learning at school. I realized that I had to come up with a different strategy for my essay and interview because I didn’t know any Japanese.

I wrote down all the stereotypes of Japan that I could think of and explained that I needed to go to Japan to get answers to questions such as, “Were the Japanese really obsessed with American baseball?” and, “Did the women walk around in kimonos everyday?”

However, although it was a very formidable obstacle, winning over the Board of Education, wasn’t the toughest thing in my way to get to Japan. After telling my parents about the scholarship for the foreign exchange, they said that I wasn’t allowed to apply.

As I mentioned before, my parents had never traveled internationally at that time, and I had extended them beyond their comfort zone when I went to France. But Mrs. Warren had been with me for that trip, and she had reassured them at the time, so that had been ok. This was different. There was no way they were going to allow their 17-year old daughter to go to another country on her own when she didn’t know the language. So, that was that.

Well, not really. I wrote and submitted the essay anyway. Not quite Malala standing up to the Taliban for her right to an education, but for me, it was rebellious.

My mom actually came into my room the night I was writing the essay and asked what I was doing. I didn’t lie. I told her the truth. I assured her that I probably wouldn’t win anyway and writing the essay was good experience for me. She looked at me, gasped in disbelief, and then since it was so late and she was tired and going up to bed, she said, “Ok, just don’t tell your father.” So, I didn’t tell him.

I remember the day I was in my AP Biology class and Mrs. Warren was standing outside the door. I had no idea why she was there. I waved to her and she kind of hid. I thought it was strange. It turned out she was trying to surprise me, and when I got out of class, she handed me a folder from the nonprofit foreign exchange organization, Youth for Understanding, and beamed as she gave me the news…

I couldn’t believe it!! I had won the scholarship, and I was going to Japan!! But, OH, NOOO!!!! Mrs. Warren didn’t know that my dad forbade me to apply. I had to tell her. So, I did.

My mom worked at the time as a teller at a bank, and without my knowing, Mrs. Warren went down to the bank and spoke with her. What teacher goes through the trouble and gets involved like that? Linda Warren did.

Mrs. Warren’s support justified to me that dreams were possible. That anything was possible! Even getting past my strict father and his sometimes totalitarian rule. (He doesn’t read my blog, so I can be all high school dramatic like that here.) It took a lot of convincing, but I did finally get permission to go to Japan for the summer. And, it definitely was one of the best experiences in my life.

Since Mrs. Warren encouraged me to travel internationally as a student, I have now visited sixteen countries. But perhaps some of the best things that have come out of my love of all things international are my English husband who also loves to travel, and the amazing opportunities the women at World Moms Blog and I have created together. We’ve spoken on a panel at the World Bank in support of the universal education for all children; accepted invitations to the White House and the United Nations; been on various delegations around the world to view health and education programs, and I still feel like we’re just getting started!

I can’t help but think that World Moms Blog may not have been, if I didn’t have Mrs. Warren’s support and invitation to the world when I needed her most.

Au revoir and thank you, Mrs. Warren. I am so grateful for your life. You are an inspiration. You are very missed, and I promise, I know now that everything IS possible. Your impact exceeds the number of the many students who had the opportunity to have you as a teacher.

Your life lessons proved much more valuable than what we thought we were getting when we signed up for your French class in high school. You were much more than a French teacher to me. Thank you for sharing your life with your students and inspiring us.

This is an original post to World Moms Blog by founder, Jennifer Burden of New Jersey, USA, who is greatly missing her French teacher today as she heads to a memorial mass for Linda Warren.

Photo from the Brick Memorial High School Class of ’94 Yearbook.