OMAN: Don’t Be Such a Woman 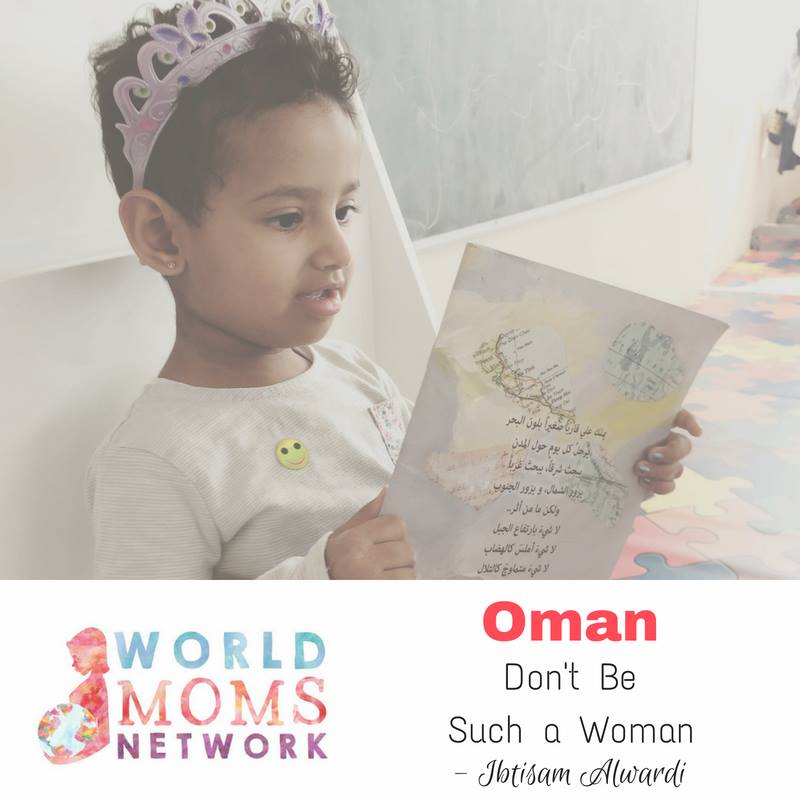 Gender inequality is a sensitive, yet significant issue.  Gender inequality (i.e. discrimination) against women and girls affects their education opportunities, choice of career and even their economic advancement.

Gender discrimination is so embedded in many cultures that it has become normalized, people perceive it as being acceptable. Hence, trying to discuss gender inequality can result in extreme responses such as anger, or maybe denial.  It is also common to receive responses of pure surprise from both genders, as if it is an issue that does not exist.

I will try here to my observations of gender discrimination that can be encountered in Oman, keeping in mind that this is not a study. Omani culture is diverse, and is not homogenous.

Until recently (and still today, with many families) an educated woman was considered a person who deserves less respect than an educated man. I believe this was the case worldwide at some point and time, which is why many female intellectuals throughout history used male pen names to publish their work. This is exactly why we did not have many female contributors in science, politics, etc, as this was totally unacceptable in many cultures. Historically, girls were given fewer opportunities to advance in their studies, resulting in much higher illiteracy amongst girls and women. I still hear many men (and women alike) insisting that a woman’s place is the home and that this should be her only choice.

Many universities in this part of the world have colleges that accept men only. I personally graduated from school during a time when the college of engineering in one of Oman’s universities accepted only men. Luckily, this has since changed, and both men and women are accepted.

Moreover, there is obvious discrimination in salaries, allowances, and career development opportunities in many countries in my region. Luckily, this is not true in Oman now. Although, at the time I graduated from university, I had to attain higher grades for my scholarship, compared to the boys who applied at the time. Fortunately this has also changed now, and discrimination in the opportunities given to men and women is much less obvious. However, some discrimination is still institutionalized. For example, if an Omani woman marries a non-Omani man, then she cannot pass her Omani citizenship to her children. At the same time, an Omani man can pass his Omani citizenship to his kids, regardless of his wife’s nationality.

Career choices are also subject to gender discrimination, and men can also suffer from that. I can still remember the comments I heard about men who opted to study nursing. Nursing was seen as a career for women, and men working as nurses received continuous sarcasm.

Women were once only allowed to study education, as a teaching job effectively kept women segregated from men. Studying medicine, for example, was once frowned upon for women. This has changed dramatically, but female doctors are still not widely accepted. Discrimination is obvious even in recreation, as some hobbies are still only acceptable for men.

Discrimination is also common in our daily language. Until recently (and even today, with many families), a man saying the name of one of his female family members in front of other men is considered shameful. Moreover, disrespectful phrases like “don’t be such a woman” are still commonly heard. Furthermore, there are many societal codes forcing specific looks, hairstyles and clothing on women. Any woman refusing to comply with these societal expectations is usually seen as disrespectful. Meanwhile, men are allowed to dress as they please.

In Oman, the tribal system is highly regarded, which means you belong to a huge family and carry their name. If a girl does something unacceptable (say she married without her family’s consent or did something unacceptable in the society), then she brings disgrace the entire tribe. However, if a boy does the same, then he carries his “shame” alone. In other words, women carry the dignity of the whole tribe on their backs. This is more common in rural areas, and less in big cities.

In Oman, women are commonly held responsible for the misbehaviour of men. For example, if a man harasses a woman, the woman will likely be blamed for it. She will be accused of provoking the harassment by wearing something indecent, for instance. Else, she will be blamed for being attractive, walking in the wrong place, talking in the wrong way, etcetera. Of course, the man is excused for whatever he does and is never held responsible. Fortunately, Oman has a strong law now against such behaviour, therefore, this is no longer a common issue here. However, it is unfortunately a critical issue in many countries.

The pressure women suffer to appear, behave, talk, and act in a certain way is huge. As such, the cosmetic surgery businesses are profiting with the active programming of girls to believe that the way you look is more important than anything else. Moreover, marriage is an integral part of our culture, and a lot of men look for beauty above all else, thus putting extra pressure on women. Of course, household chores and raising children are considered a woman’s job only in most houses.

One of the most common ways of discriminating against women is treating them as objects. Many people in this part of the world are aware of the different literature that describes women as jewels, diamonds, or pearls in a shell. This may sound poetic and beautiful, but to many, it is just a way to describe women as fragile, delicate, objects to be owned.

Due to their reduced autonomy, women in Oman are less able to manage daily activities that many women in other countries take for granted. For example, I know many women cannot even go shopping by themselves, nor are they allowed to conduct simple bank transactions. This makes them more vulnerable, and prone to exploitation.

While gender inequality is officially reduced at organizational and political levels, it still continues within the society. It is more difficult to eliminate the discrimination in areas where the law cannot interfere that much. At this point, only raising awareness can help.

These are just few of the points about this critical issue. My aim is not to degrade one part for the sake of the other, because I believe each human being deserves equal opportunity. Moreover, gender discrimination has caused more than enough damage. These days, many households are being run by women. In many cases, women are the sole breadwinners for their families. Women are the ones  who raise the kids, help them with their homework, and put food on the table. Reducing women’s opportunities to proper education, careers and treatment affects the whole society. Empowering women in every way possible brings positive change in the economic situation of any country. Many women are not even aware of their rights. They have been raised to believe that they are less than men, and thus deserve less. The vicious cycle continuous and we need to break it. Awareness is one way. I was luckier than my mother and I want my daughters to be happier than me. The fight continues!

Are you aware of any gender inequality where you live right now? What can be done to change it?

This is an original post for World Moms Network by Ibtisam Alwardi of Oman. Photo courtesy of the author.

Ibtisam (at Ibtisam's musings) is an Omani Mom of three, living in the capital city of Oman ,Muscat. After working for ten years as a speech and language therapist in a public hospital, she finally had the courage to resign and start her own business. She had a dream of owning a place where she can integrate fun, play and 'books', thus the iPlay Smart centre (@iplaysmart) was born. Currently she is focusing on raising awareness through social media about parenting, childhood, language acquisition. She started raising awareness on (the importance of reading) and (sexual harassment) targeting school-aged children. Ibtisam enjoys writing, both in Arabic and English, reading and working closely with children. She plans to write children books (in Arabic) one day. Contact Ibtisam at ibtisamblogging(at)gmail.com.