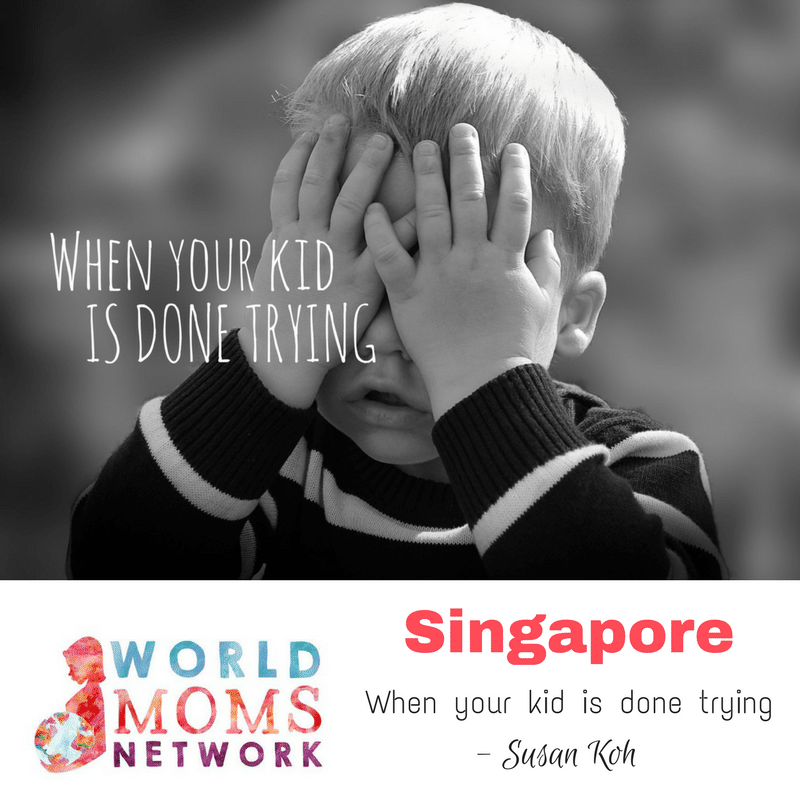 SINGAPORE: When your kid is done trying

If you have a kid at home, chances are you’ve probably watched Zootopia. It’s a story about how an unlikely bunny, became the first female police officer in a male dominated environment. But this is not about the movie itself.

This is about the movie’s theme song; “Try Everything”, by Shakira.

When the school term started, I pinned up motivational quotes and growth mindset visual reminders on my daughter’s notice board. I’m big on inspirational quotes and I believe that positive reinforcement helps to shape our thinking and behavior.

Since she was so hot about the song “Try Everything”; I printed the lyrics and made it her theme song for the year. She promised that she’ll similarly have a, try everything attitude and not give in or give up easily.

However, barely a month into the school term my 8 year-old was all ready to throw in the towel and decided that she’s done with trying because school work is so difficult. When I questioned why she didn’t attempt to do her assessment books which I bought as a supplement to her school work, she answered nonchalantly, “I have no idea how to do it”, and ended it at that. So much for teaching her about having a growth mindset and where’s that try everything attitude that she promised?

What made me furious was not because she didn’t know how to do it which is acceptable if she’s not learnt it in school.  Rather it’s her lack of efforts in trying because she assumed that I’ll dish out the answers to her. That to me is simply unacceptable and I ranted about it on Facebook.

Turns out I was not alone and many parents had similar struggles with their kids.

We lead by example by not giving up on our kids and trying different approaches to see how best to get to them. It can be a tricky balance between encouraging and pushing our kids finding out how we can change their attitudes and how they have to be responsible for their own learning.

These days, I’m also teaching my daughter that there’s no shame in failing because now she has discovered what is wrong. She can be one step closer to what’s right. And in the process, I’m reminded to praise the efforts she’s taken rather than the results themselves so that she is undeterred even when she has to take on more demanding tasks.

How do you encourage your kids to try tackling a new or challenging task?