SATURDAY SIDEBAR: World Pneumonia Day: How Do You Feel about Vaccinations? 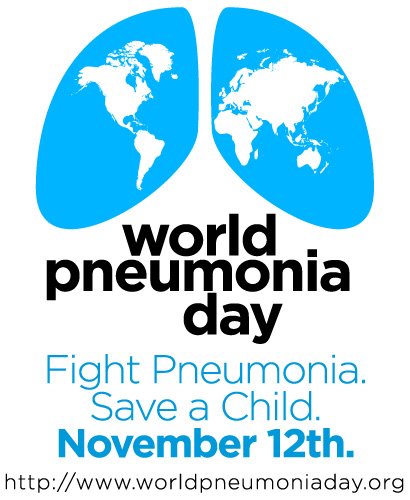 Pneumonia is the biggest most solvable global health problem affecting children.  And every 20 seconds a child in the world dies from pneumonia, according to Dr. Orin Levine of the International Vaccine Access Center of Johns Hopkins University.

Dr. Levine also says that the most cost effective way to prevent death by pneumonia for the world’s children is by vaccination programs such as the ones that the GAVI Alliance administers in developing countries.

So, in honor of World Pneumonia Day today, the World Moms Blog writers are discussing their personal experiences with vaccinations in today’s Saturday Sidebar.

How do you feel about vaccinating your children?

“At 8 weeks old, my daughter spent 10 days in the hospital because of Rotavirus (Rotavirus along with pneumonia is a leading cause of death of children under 5 years old in the world according to the GAVI Alliance)…I am also curious if any efforts are spent educating parents that truly feel vaccinations cause more harm than good – I was approached by a mom when my kids were very little … She was attempting to convince me not to vaccinate my girls…. Didn’t go over well!”

“My blood pressure rises each time the topic of vaccinations comes up, and I have to make decisions for my kids. In my pre-mom job I worked with many children battling the daily challenges of Autism. I know that the research is able to dispel so many of the accusations and links between vaccinations and Autism but I still get that knot in my stomach. Here in Switzerland they seem to be far more conservative in the vaccinations they give.

Our pediatrician here was shocked that I wanted the chicken pox vaccine and some Swiss friends laughed when I referred to the Swine Flu vaccine experiences we had a couple of years ago in the US. Switzerland produces many of the worlds vaccines but from what I am hearing on the street they aren’t jumping as quickly to use them! At the end of they day we all want healthy happy kids!! I just wish the whole vaccine world was more crystal clear!”

“Whooping cough is on the rise here in Northern California, especially in Marin County (just north of San Francisco). What is interesting is that Marin County is one of the most affluent counties in the USA AND has one of the highest number of children that are NOT vaccinated. Hence the rise of whooping-cough.

I just find it interesting that people with the MOST money and MOST education, opt to make this decision that in the end doesn’t affect just their children but the children around them.

“I’d be interested in more info on whooping-cough (pertussis vaccine). There’s a 14% increase in cases here in WA State. A recent news report indicated that the vaccine may wear off in teens and adults…who may have mild symptoms, but when passed on to infants and children, could be life threatening. I just emailed my doctor to find out about whether there are any recommendations around re-vaccination for pertussis in late teens and adults. So I’d be curious to learn more about that.”

Mama B. in Saudi Arabia says:

“The hospital where my children get vaccinated follows the American vaccination schedule. I have always hated vaccinations mostly because it’s such a barbaric way to administer medication! I hated putting my children through that. Having said that I always followed the schedule they gave us at the birth of each of my children. I do not, however, give them the flu vaccine. Some doctors are fine with that. one called me stupid and told me that if my children ever really had the flu I would change my mind. I just feel like it is not a total necessity. I am open to arguments of the other side on this as I want to understand.

As for how it is in Saudi, I assume all other mothers followed the routine vaccinations (as you can’t get your children into school without them). But at my children’s school they were giving the MMR vaccine (which is standard) because many parents were skipping it! I was surprised. My youngest sister had a seizer after her MMR vaccine when she was an infant so did not continue them. She was told that before she has kids she must have it again. Do you give your kids the flu vaccine? Do you take it? I took it once before I went to Hajj.”

“We get the flu shot every year (in fact, my kids, 5 & 2, just got theirs yesterday). It’s far less trouble than getting the flu and I let them have a lolli afterward so they barely have time to focus on the momentary discomfort.”

“Vaccinations are a touchy subject for me – or rather, the ability to make vaccination choices on behalf of our children is. There are people who have judged me because I chose to vaccinate both of my kids in spite of my older son’s autism – this happened right when the autism/vaccine theory was rampant. I did a lot of research on the subject when my kids were younger. I read studies on both sides of the debate. I ended up with the view that this theory doesn’t hold water.

Now that it has been debunked by most of the medical community, there are still people who swear by it. Which is fine. I respect other people’s right not to vaccinate as much as I expect them to respect my right to vaccinate. I could talk facts and statistics at you, but once I really get going on this, I can keep it up all day! I know that vaccines had nothing to do with my son’s autism – I have known from day 1 that there was something up with him, before vaccines ever entered the picture. Vaccines have not done either of my kids any harm, apart from royally pissing them off.

Regarding the flu vaccine, I don’t usually get it either for myself or for my kids. I believe that good habits, like frequent hand-washing, is enough. I also think our immune systems are strong enough to put up a decent fight against the flu. Having said that, I made an exception for H1N1, because we live with my mother-in-law, who was in a high-risk group for that. We didn’t want to take any chances.”

As a new mom over 4 years ago, I admit, I was worried about the media around the MMR vaccination. I tried to split up the vaccine into 3 separate doses for my oldest daughter, only they ran out of the mumps vaccination globally at the time! (In the US the MMR vaccine is usually given at 15 months old.) So, I spoke in more detail about it with her pediatrician and designated time to do some research on the topic around the hype. I couldn’t find conclusive evidence of a link to autism, and she wound up getting the MMR vaccination.

Interestingly enough, here we are years later, and I’ve chosen to give my younger daughter the MMR vaccination ahead of schedule at 8 months old.  Why? We have a future trip to Europe coming up, and her pediatrician recommended it because there have been measles outbreaks in Europe. Why? Because parents are choosing not to vaccinate, and they have put their children at risk for these diseases, which have created susceptibility to new outbreaks.”

What are your thoughts on vaccinations as a mother?

Photo credit to the Global Coalition Against Pneumonia.