INDONESIA: Boys and Their Toys 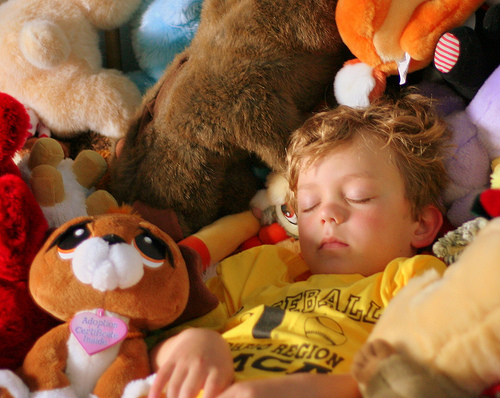 The November 19th Saturday Sidebar question was so interesting I couldn’t help but take a deeper look into the whole gender issue, especially from an Indonesian mother’s point of view.

(Disclaimer: it is not easy to characterize the existing patriarchy in Indonesia, as there are more than 200 ethnic groups organized along patrilineal and matrilineal lines. Also, I have no experience raising a girl here in Indonesia–-in fact, I had no experience in child rearing before my son was born. And finally, before I became a mother myself, I never paid much attention to how people raise children here.)

About two years ago, when my son was a toddler, who dearly loved stuffed animals, I took him to a store here in Jakarta. He immediately grabbed a stuffed pig off a bottom shelf and started loving it. The store attendant quickly made a comment that caused my defensive mama-bear mode to jump into action:

A little clarification here, in my language there is no formal Indonesian word that differentiates between a doll and stuffed toys; they’re all ‘boneka,‘ which loosely translates into English as ‘doll’.

I quickly jumped in and defended my little boy. Sheepishly, the girl walked away after apologizing but not after I told her to keep her parenting advice to herself next time.

Gender related toys are popular here in Indonesia. Boys play with cars, airplanes and the likes, while girls play with dolls, princess and anything feminine. So some people still freak out when they see a boy playing with a “girl” toy.

When my son was younger, he had a huge collection of stuffed toys that are now being stored in a box. He loves them and still sometimes plays with them. Does it scare me? No. It’s actually teaching him to be gentle, rather than rough-housing all the time.

The way I feel about him playing with stuffed toys is just the way I feel about letting him experiment with my make-up. Around the age of 3, he got really interested in watching me put my make-up on. He watched with a child’s pure fascination, so one day I let him play with it. Face painting is more fun with Mommy’s blush  and lipstick.

Some people weren’t happy about this. They started making comments that no boys should be allowed to play with their mother’s make-up. For me, it was nothing more than the “Monkey see, monkey do” phase that he eventually grew out of.

What I don’t appreciate is when strangers direct their negativity straight at my son. He’s too young, he’s in those precious moments, where he can enjoy life as a pure adventure of discovery, of learning, of being carefree. That is what I want to protect.

Now excuse me while I clean up these scattered train tracks before I step on some of them!

Do you keep your children from playing with opposite gender toys? How does your culture view this?

This is an original post to World Moms Blog from our single-mom of one, Tatter Scoops, in Indonesia.

The photograph used in this post was taken by John Morgan and has a Flicker Creative Commons attribution license.