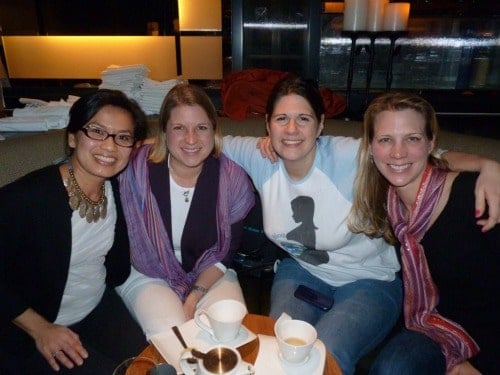 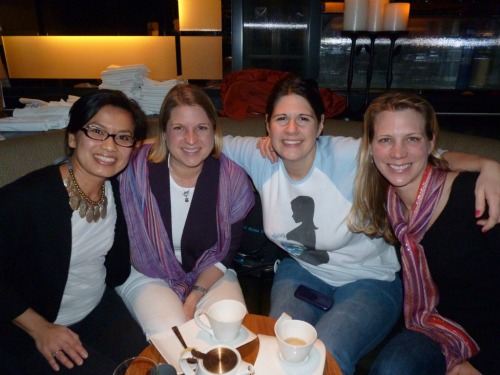 In March, our Indonesian contributors, Maureen and Shaula Bellour, also met for the first time ever in Jakarta for coffee. 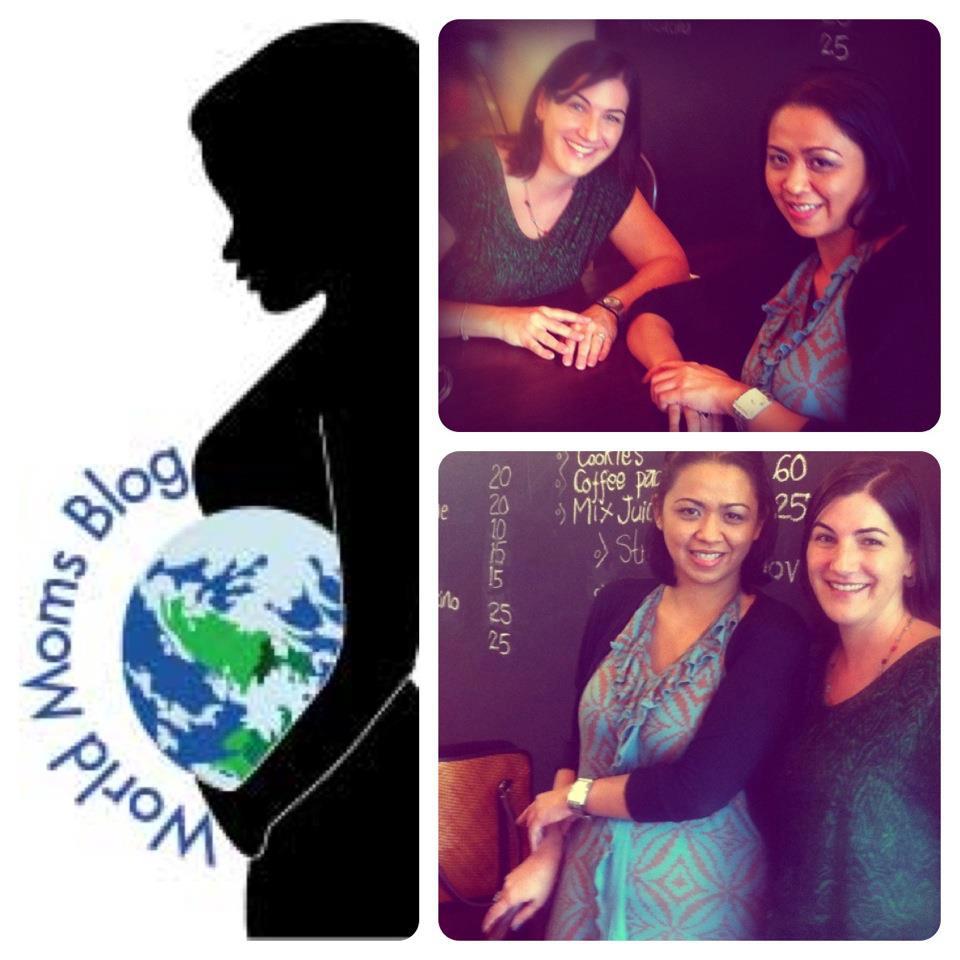 World Moms Blog contributors Maureen from @ScoopsofJoy and Shaula Bellour meet for the first time in Jakarta in March 2012!

In April, I was invited back by the UN Foundation to speak, this time at a press conference in Times Square with actress Amanda Peet! Footage from the launch of the Shot@Life public service announcement (PSA) was featured on television stations in the US, including CNN and Fox News. World Moms Blog was also quoted in an article regarding life-saving vaccines for children at Scientific American. 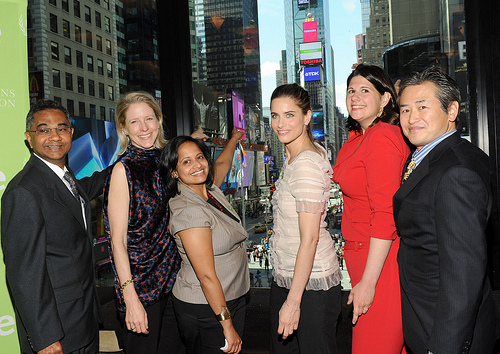 In May World Moms Blog was listed by Forbes Woman in their “Top 100 Websites for Women 2012“. And we were screaming our heads off in excitement all around the globe when we heard the news! Out of over 1100 websites we were officially listed by Forbes!!

Our contributors have never been more proud of our work in providing voices to women around the world as we unify in motherhood. We are breaking cultural and religious boundaries and talking about what matters most, raising the world’s future, our children, as well as, advocating for global health issues for women and children. To top off the honor, we sneaked a picture with the publisher of Forbes Woman, Moira Forbes, in September at the Social Good Summit in NYC. 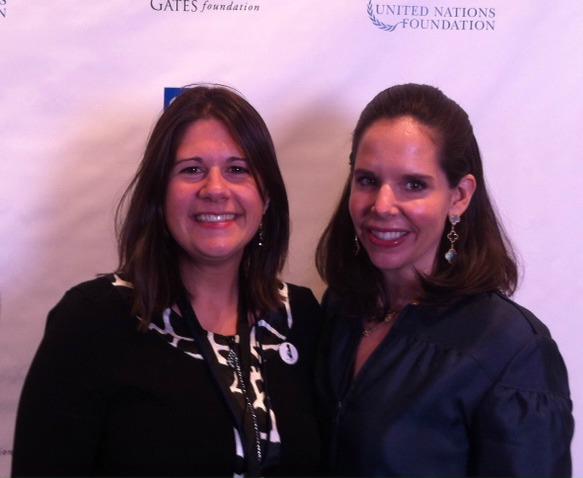 Our editors worked hard this year to collect feedback from our contributors to unveil our  new blog design, which launched at the beginning of August. Thank you to our blog designer, Kayleen from Booyah Creative!

Also in August, 9 of our contributors headed to the BlogHer conference in New York City. We had a special World Moms Blog meet up at Uncle Nick’s Greek restaurant to get to know one another better before the blogging festivities began! 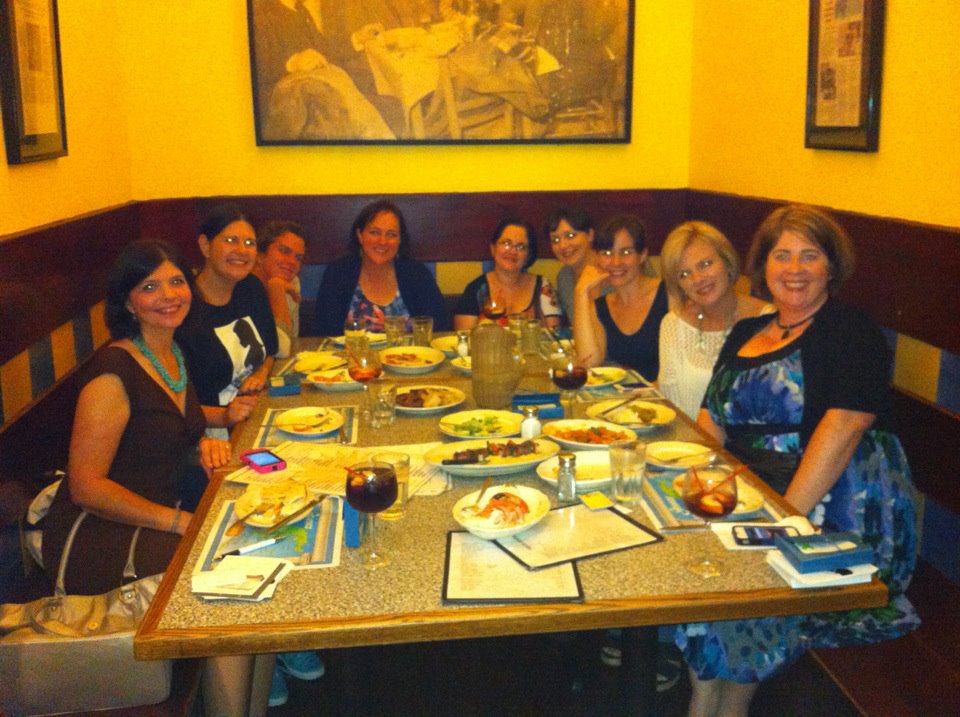 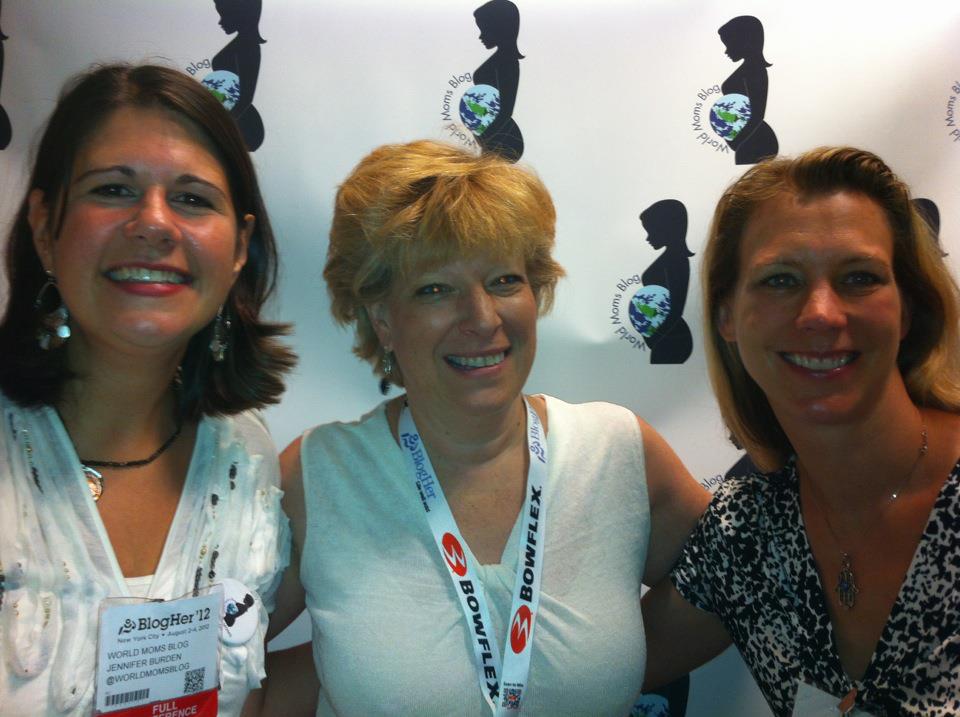 Jennifer Burden and Nicole Melancon of World Moms Blog pose with Lisa Belkin of HuffPost Parents at BlogHer ’12 in August 2012.

In September, World Moms Blog was granted a press pass to the exclusive Clinton Global Initiative in New York City, where we got to witness some amazing speakers in action, including Queen Rania of Jordan, Ban-Ki Moon, Nicholas Kristtoff, Bill Clinton, Hillary Clinton, Mitt Romney, and US President Barack Obama. 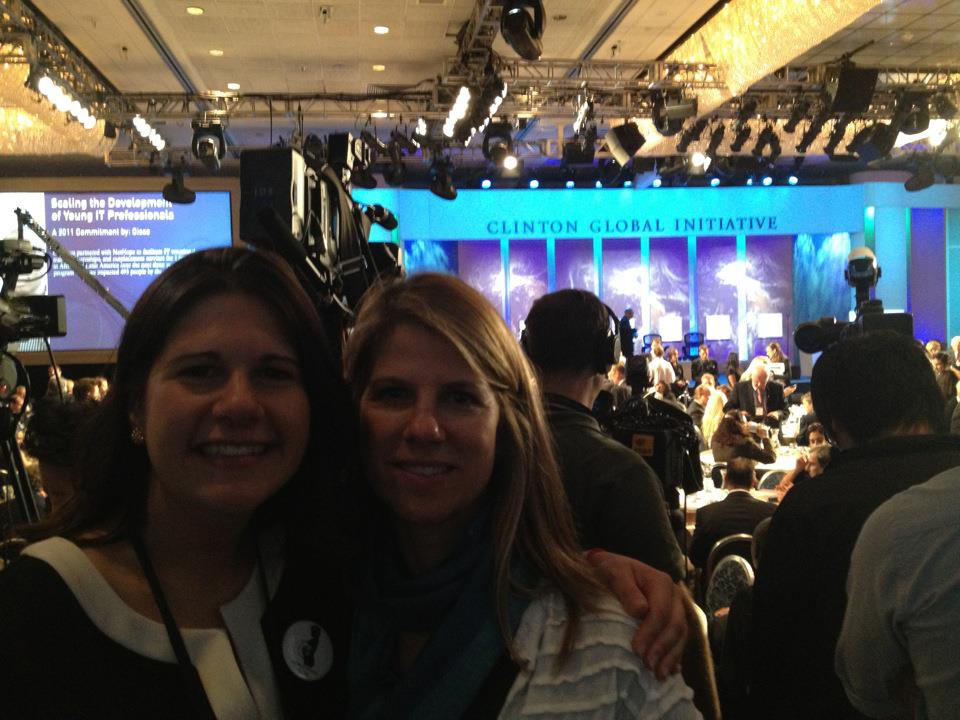 Jennifer Burden of World Moms Blog at the Clinton Global Initiative in New York City with Emily McKhann of The Motherhood in September 2012!

We were also at the Social Good Summit in New York City, where we met up with our friends at ONE, the UN Foundation & the GAVI Alliance. 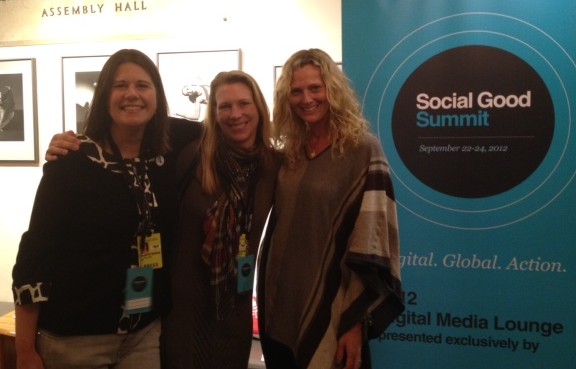 While at the Social Good Summit, we also met the amazing Andi Gitow, a senior television producer at the United Nations, who later provided this insightful interview on World Moms Blog to our senior editor, Kyla P’an. At the same time, contributing editor, Elizabeth Atalay, scheduled a meeting with the President of the Fistula Foundation while in NYC, which led to her post on our site to raise awareness for women suffering from fistula, a maternal health problem.

Also in New York City, we attended the Mercedes-Benz Fashion Week!  We were there to support our Shot@Life friends who walked the catwalk for STRUT: The Fashionable Mom Show! Thank you to our friend, Holly Pavlika of Momentum, for the invitation. 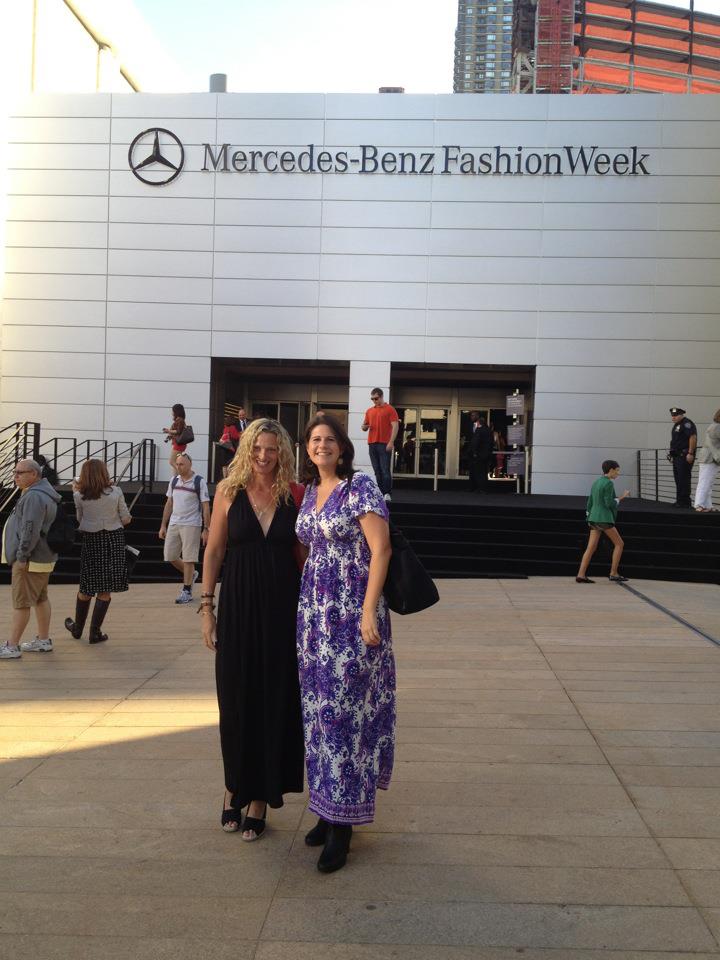 Next, our ongoing project with the GAVI Alliance to create a documentary around life-saving vaccinations, initiated World Moms Blog events in India (Purnima Ramakrishnan), Indonesia and two in the USA (Denise Paredes & Jennifer Burden) in 2012! Here is a photo montage from the party in Bali, Indonesia thrown by Lady E.

In October, we received this amazing picture tweeted from the #ONEMoms in Ethiopia! This year World Moms Blog is thrilled to be a community partner with the #ONEMoms. 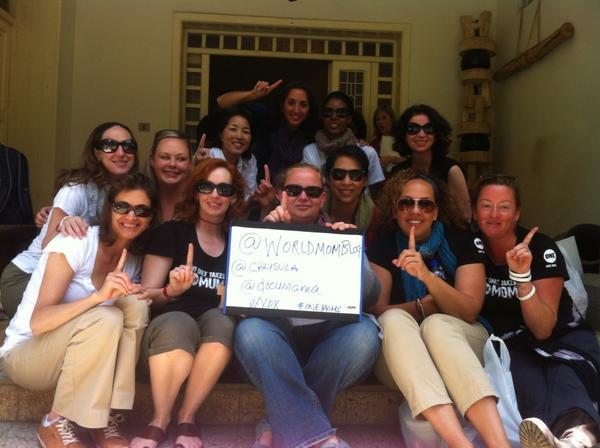 The #ONEMoms in Ethiopia in October 2012 gave a shout out to World Moms Blog!

As if things couldn’t get any better, in October, the UN Foundation invited us to Uganda to observe UNICEF’s programs there! I am already learning so much from Shot@Life champion, Cindy Levin of RESULTS, a citizens’ lobby to end poverty, who was a part of the delegation. To top it off, champion LaShaun Martin of Shootie Girl and Mocha Moms, who was also on the trip, is joining World Moms Blog!  We’ve only made a dent into writing about the adventure, so look out for more from the Shot@Life trip in 2013. 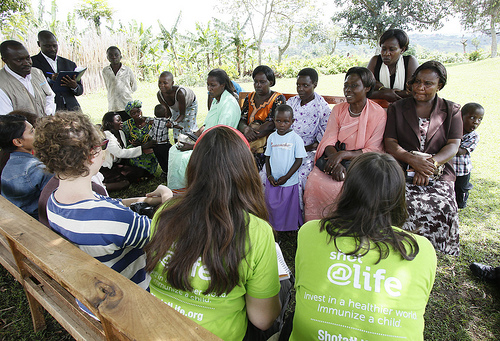 We love to see our contributors continue to make friendships offline, too. In November, World Moms Blog contributor Maureen got the chance to meet another writer in Jakarta, this time Ana Gaby! 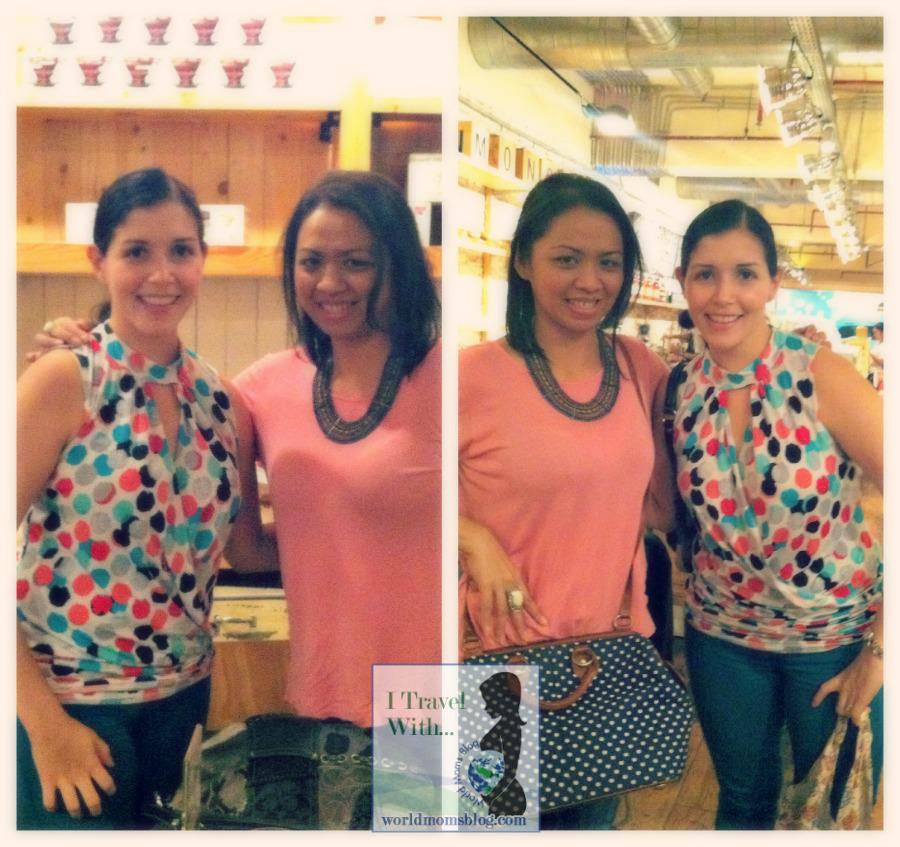 In December, Ruth Wong of Singapore and Maureen from Indonesia initiated and carried out a surprise gift exchange program, called Fairy Moms, to unite our contributors around the world, and to help further bond our global mothers behind the website. It has been a great success!

This year, we raised awareness on a number of important global topics such as maternal health, life-saving vaccinations for children in the developing world, fistula, the education of girls, mentoring special needs children and international orphanages.  We also wrote about our own mothers’ experiences in mental health, friendship, religion, culture and women empowerment, to name a few. We added some really great new contributors, and new contributors to our World Voice column (Social Good & Human Rights).

We promoted five Contributing Editors to Senior Editors who have taken on managerial roles for World Moms Blog and have been outright superstars: Kirsten Doyle (Canada), Kyla P’an (USA), Eva Fannon (USA), Purnima Ramakrishnan (India) and Alison Lee (Malaysia). The website is no longer a solo effort (me!) — we are a global team now making this happen! All the editors and contributors are also volunteers, which makes this truly amazing.

It blows my mind how a group of global mothers, all very busy in one way or another, have come together to make World Moms Blog so successful.  We care about each other and this movement. 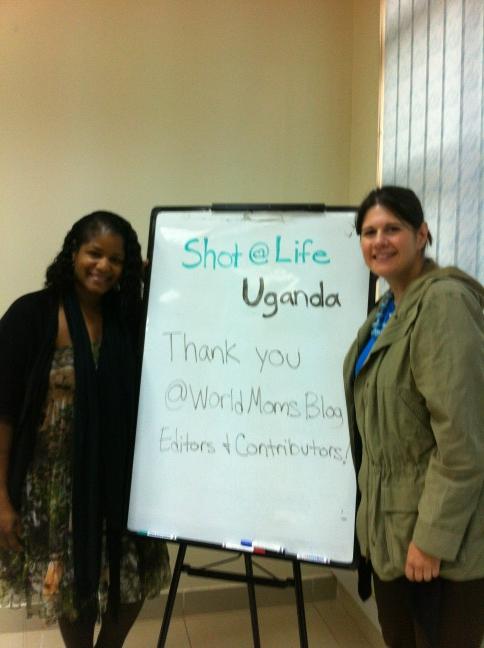 Lashaun Martin (USA) and Jennifer Burden (USA) thank the World Moms Blog editors and contributors from UNICEF offices in Kampala, Uganda, where they were on a delegation with the UN Foundation’s Shot@Life campaign in October 2012.

From Monday December 23rd through January 6th, the editors and contributors at World Moms Blog are taking a hard-earned break, a blogcation for the holidays. We will resume our regular schedule on Monday, January 7th, 2013. We are extremely appreciative of our readers and hope to give you all more great stories to read about from around the globe in 2013. Thank you, dedicated readers!!