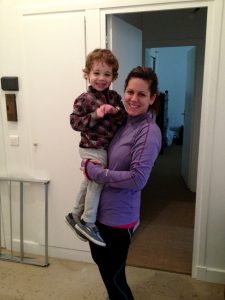 In September of 2012, still battling the war against the baby weight I had gained in pregnancy and losing (my own “baby” now three and a half), I decided that running seemed like a good idea. Except that in September, I had never successfully run a mile in my life, not even once. I needed a goal to keep me on track, a motivational tool to push me out the door before the sun rose on cold fall days in Paris. Armed with the idea that a half marathon was “completely possible,” I set out to find the most interesting, and difficult, half marathon I could find. A race at the Great Wall of China was first to leap out on the page, but as I scrolled down further, there it was: the 2013 Kilimanjaro Marathon in Tanzania.

Later that evening, I said to my husband, “I’m going to run the half portion of the Kili Marathon in March,” and my husband, slowly raising his eyebrow said, “That’s great, but shouldn’t you run a 5K first?”

The next morning, I officially registered to run the Kili, and when I told my husband, he looked at me and smiled. He knew there was no changing my mind; I could do this. And to complicate training, I decided that raising money for 13 charities seemed like a good idea. After identifying a few that I felt were doing amazing work and which I have supported in the past, I sought the input of my friends, family, and World Mom Blog contributors. The list was endless, so many amazing charities, so many reasons to choose each one. However there could only be 13. After painstakingly deciding which ones I’d select, I then began the slow training progression from walking a mile to running 13.

Rising early as my son slept, I ran/walked until I could run 1 mile. Each day was a new opportunity to push my body to move, each step guiding me closer to my goal. With each run, my body moved with a little more ease. When my breathing became labored and I struggled to meet the distance goal of the day, my thoughts always went to the 13 charities, to the people I was running for. More often that not, my mind overcame the pain within my body, and I pushed on.

But running four to six times per week wasn’t easy; it often meant early mornings or late evenings, giving up bedtime stories with my son, or park time while he played. And as moms often do, I began to allow mommy guilt to creep in. Was this fair to my little guy?

I got my answer one Saturday morning after lacing up my sneakers and walking to the local park with my husband and son. While they enjoyed one-on-one time together, I ran a few miles within eyesight. When I was done, my son, HJ ran up to me.

“Momma you ran fast, fast, fast! You did a great job!”

Since then, my son has been my biggest supporter. Every time he sees me in my running gear, he says, “Momma, you go run!” and when I’m not around, he tells people, “Momma is running.” Allowing his pride and enthusiasm to overcome me has helped push aside any mommy guilt and often when I run the streets of Paris, I have a huge smile on my face. All I can see is my son, so excited for me, and the 13 charities that are getting fundraising and awareness.

Unfortunately, while running my first 15K at the beginning of February, I managed to injure myself and have been benched from running for the past two weeks. At a physical therapy session earlier this week, I asked the doctor when I would be able to run again, knowing in the back of my mind that March 3rd is only around the corner. His response crushed me: “Three weeks from the date of the injury.” That three weeks puts me running again on the day of my half marathon.

When I think about the time and dedication I spent working towards this goal, my heart sinks, I cry, I feel frustrated that my body can’t meet the determination of my mind.

I know that whether I walk the Kili or run it, that it’s the journey I’ve taken to get there that is far more important. And I know that my little boy will think I’m running fast whether it takes me 2 hours or 3. He may be too young right now to understand why I run, but one day he will make that connection, and I hope that he’s as proud of why I ran as much as he is of how much I ran.

This is an original post to World Moms Blog by our contributor, Jacki “MommaExpat.”  You can find Jacki blogging about running the Kilimanjaro Marathon and living in France at HJUnderway. Photo credit to the author.