Social Good: Half The Sky, The Game 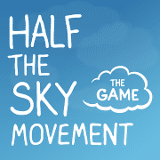 Sometimes I want my mom to read the things I write. Other times I don’t. This would be one of those times. 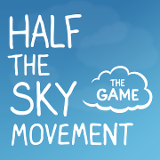 In 2009, I connected with friends, old classmates, and work colleagues through Facebook. Long before worries about privacy settings, the idea of over-sharing  and all of the fun (and annoying) things that come with a Facebook profile, I enjoyed posting and sharing. At that time, there was no way to filter what you saw in your news feed  and honestly, I don’t remember feeling like I needed to “hide,” or “block” a type of post. After all, these were people I chose to be friends with.

Right around the time my son was born, my mom joined Facebook. Living 1 ½ hours away seemed like a lifetime to us both, so Facebook became a wonderful way to share photos of my newborn son and entertain myself during those first months when I was scared to venture out of the house alone with a baby. One day while scanning the status updates of my friends, I noticed that I had a lot of notifications, mostly from my mom for something called “Farmville.” Having never heard of Farmville, I clicked and joined, only to realize that what I was signing up for was management of a “working” farm, complete with sheep baaing in the background.

Farmville came, then Bejeweled, Scrabble, and then Words with Friends, and finally Song Pop. I was completely overwhelmed with all of the notifications I was receiving so I did what most people do; I hid them. To me, they were time suckers, distractions when I already had too much on my mind. But for my mom and other people, they were a fun break from reality, a quick opportunity to interact with others and then step away. While I received little enjoyment from these online games, there is an entire, massive community of people who do. Now what if you paired addicting online games with social good?

Co-authors of Half the Sky: Turning Oppression into Opportunity for Women Worldwide Kristof and WuDunn came up with the idea of reaching the some 300 million people who play games on Facebook in a new and innovative way.

“We want to reach a broader audience for these issues we care deeply about,” said Kristof and WuDunn. “We hope that a Facebook game that is fun and viral can be a way to do that, reaching people who aren’t now interested in women’s empowerment. This is an experiment, because we’re not sure that there has ever been a social purpose game with as much collective effort, and we’re hoping it is going to make a difference for the players – and for women and girls around the world.”

Half the Sky: The Game will allow players to take a virtual adventure beginning in India, and then moving onto Kenya, Vietnam, and Afghanistan, ending in the U.S. Along the way, they will engage with a variety of characters and perform tasks that will unlock funds from the game’s sponsors. For example, players can collect books for young girls in the virtual world which activates a real-life donation to Room to Read supported by the Pearson Foundation (total of $250,000). Collectively, players also trigger funding for life transforming surgeries through The Fistula Foundation (total of $250,000). The game officially launched on March 4th, and $500,000 from the sponsors will be available for players to unlock while participating in the game, which you can see more about here. (http://youtu.be/N6Ahpocmjs0)

Even though I might have avoided Facebook games in the past, I definitely think playing one that will contribute hundreds of thousands of dollars to charities like The Fistula Foundation would be worth it.

The Fistula Foundation is an A+ charity that helps women who have developed a fistula receive proper medical treatment and reconstructive surgery. The World Health Organization estimates there may be as many as 50,000 to 100,000 new cases of fistula each year, and yet the global treatment capacity to assist these women is less than 20,000 cases per year. While playing Half The Sky: The Game, gamers will unlock real-life simulations that will help support The Fistula Foundation through generous donations from Johnson & Johnson. Gamers also have the option of donating money themselves to causes they believe in will they play the game.

And if I see Half the Sky: The Game in my news feed  I’ll be happy knowing it means that more awareness and funds are being contributed to such worthwhile causes. You might even see me “liking” some game notifications.

(To play the new Half the Sky game, click here)

This is an original post to World Moms Blog by Jacki “MommaExpat.”  You can find Jacki blogging at HJUnderway about running the Kilimanjaro Marathon and living in France at HJUnderway.

The image used in this post is credited to Half The Sky Movement, The Game on Facebook and clicking on it will direct you there.  The YouTube  video link  also via Half The Sky: The Movement.