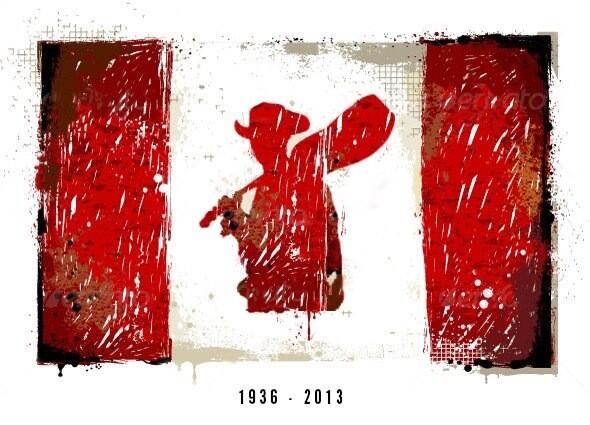 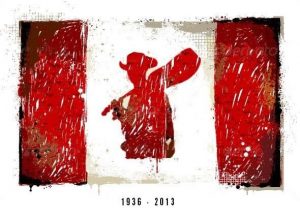 So when Stompin’ Tom passed away, I didn’t have many fellow mourners with me in hip, urban Vancouver. The 65 year old kennel lady at my work and I exchanged a hug, while everyone else looked at us strangely.

It’s not that I loved his music so much.

I think I have all of one Stompin’ Tom song in my iTunes collection, and even then I don’t ever listen to it.

She loves the way it feels, driving snowmobiles;
And laughing at her dates, when they don’t know how to skate.
She knows her hockey games, and the players of the world;
She’s an all Acadian, northern lady-an,
A real Canadian girl!” – Real Canadian Girl, Stompin’ Tom Connors

My Canadian musical tastes run more to Stan Rogers and the Barenaked Ladies than Stompin’ Tom’s nasal twang. His songs bring me back to evenings at my Uncle’s feet while he strummed on the guitar, that’s all.

But Stompin’ Tom was a true Canadian.

In a country where success is usually measured by American recognition, Stompin’ Tom sang songs with Canadian content, for Canadians.

He sang about life in various Canadian towns, about Canadian history, and about Canada’s messed up relationship with the United States.

“Canadian radio, boy is it grand,
when you want to hear music from some other land
They tell us to like it and flow with the stream
We have no Canadian dream.” – No Canadian Dream, Stompin’ Tom Connors

He called Canadian artists who moved to Hollywood “turncoats” and was a vocal protester when it came to protecting Canadian culture.

“Goodbye Jim and Jackie, goodbye John and May,
We hate to see you leaving, bound for the U.S.A.
But if you don’t believe your country should come before yourself,
You can better serve your country, by living somewhere else!” – Believe In Your Country, Stompin’ Tom Connors

He returned musical awards and turned down an induction into the Country Music Hall of Fame out of protest to the company he would keep.

“I feel that the Junos should be for people who are living in Canada, whose main base of business operations is in Canada, who are working toward the recognition of Canadian talent in this country.”

“It’s Canada Day up Canada way, when the long cold winter’s done.
And we’re shoutin’ “hooray” up Canada way for the great days yet to come.
Where maple trees grow maple leaves, when the Northern sun is high.
We’re Canadians and we’re born again on the first day of July.” – Canada Day Up Canada Way, Stompin’ Tom Connors

Canada’s official languages may be English and French, but you won’t find many French speakers here. Instead people enroll their children in Mandarin classes.

Tim Horton’s may be the unofficial national restaurant, but in Vancouver, people eat sushi on their lunch break, not doughnuts.

Vancouverites don’t even really have a Canadian accent, possibly because most of them have a Chinese/Korean/Japanese/Punjabi/Persian accent instead.

That being said, Vancouver’s multi-culturalism isn’t anti-Canadian. If anything, Canada was built upon multiculturalism. Where the United States is a melting pot, we consider ourselves to be a salad bowl. Canada is made up of immigrants, and we’re proud of that.

But Vancouver’s multiculturalism is so extreme that there is very little cohesive cultural identity to be found in it at all.

And this is where my son is growing up. 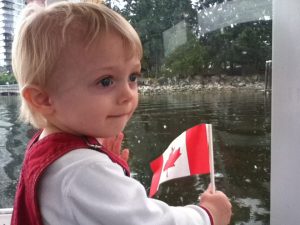 At age 2, he  knows more Farsi than French, and has eaten more sushi than poutine. He enjoys trips to “The States” for groceries, too… though I think he believes that “The States” is a Walmart in Bellingham, WA.

He’s not sure what Canada is. When we come back across the border he keeps wondering “where Canada go?”

Where, indeed, with icons like Stompin’ Tom leaving us behind.

Stompin’ Tom wrote Canada a letter before he died. In it, he said,

“It was a long hard bumpy road, but this great country kept me inspired with it’s beauty, character, and spirit, driving me to keep marching on and devoted to sing about its people and places that make Canada the greatest country in the world.”

“I must now pass the torch, to all of you, to help keep the Maple Leaf flying high, and be the Patriot Canada needs now and in the future.”

I wonder about how I can raise my son to love being Canadian.

I wonder if he will be able to speak some French, to skate, to ski, to sing “Barrett’s Privateers” when intoxicated, and engage in other basic Canadian activities.

Will he be proud of Canada?

Will he be a Real Canadian Boy?

How do you teach your children about their culture and heritage? Do you teach them national pride?

This is  an original post for World Moms Blog from Carol.  She can be found on her blog, If By Yes, and on Twitter @IfByYesTweets

Credit to the author for the picture of her son holding the Canadian flag.