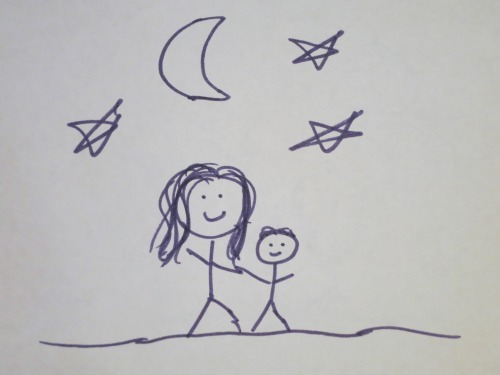 Potty training my three year old son has not been easy. He’s been resistant to the idea for quite some time. I chalk this up to two things. First, he has a willful spirit and often rejects my proposals on principle. Even when dealing with treats or play, if it isn’t his idea, he’ll pass. Second, my son verbalizes to me regularly that he is still a baby.

On one hand, I’m touched to hear my child to tell me he wants to stay my baby. On the other hand, I don’t want him using this baby-business as an excuse to hold back. I pointed out things like, “But babies don’t ride two wheel bikes, eat ice cream, and go to the movies” (all things he loves to do). He corrected me and said, “No. Babies do ride bikes. Babies do eat ice cream.” Etc.

I also offered reassurance that even though he is changing from a baby to a little boy, he’ll always be MY baby, and I will love him just the same. He replied, “I’m not a boy. I’m a baby.”

Basically, I let it lie. I’d ask him from time to time if he felt like trying on underwear or sitting on the potty. When he continually said no, I didn’t force it.

Then recently I went out for the day with a friend, and when I returned my husband had my son in underwear. I hadn’t planned on potty training, but since we finally had an opening, I went for it.

It was rocky at first in all the usual ways. There are so many things for little ones to coordinate. The messes and the emotional outpouring were epic, and the more I pushed, the more my son resisted.

Then one night I walked into the bathroom to find him using the potty. He looked right at me and said, “Babies use the potty.” It was in this a-ha moment that I remembered that the moon was made of cream cheese.

Let me back up. My older son is very logical and literal, so often he and my younger son get into these arguments over nonsense. Little brother will make claims like volcanoes shoot sharks into the ocean, and big brother will correct him on the real world facts. Mayhem ensues.

One day I had a talk with my older son and explained that a) his brother is 3 years old and has a wild imagination that we need to support, and b) little brother loves to get big brother’s goat. If he thinks he’s bothering you with his fantastical stories, then those stories will only grow.

Back to baby on the potty. My younger, spirited son has been very clear all along that he is a baby, but he also has said that babies do all sorts of things, like climb monkey bars and make dare-devil skid turns on a bike. Taking my own advice, I shouldn’t have argued the point of him being a baby, but instead encouraged the baby to use the bathroom. All this little guy ever wants is to exercise his ideas and individuality. I love this about him, and I just need to remember that during these life transitions.

We’re six days into potty training at the time that I’m writing this, and the progress he has made is just amazing. Every time he does his business, he comes running up to me for a hug and asks if I am proud of him, which of course, I show exuberantly. He often falls into my embrace and says he’s still my baby, which I now affirm without pause.

I am grateful for the lessons my children teach me every day. As for my younger son, he continually reminds me to dream big under a cream cheese moon.

How did potty training go in your household, and what lessons did you learn from it?