The Founder of the View Finder Workshop describes her inspiration:

“I WAS WALKING THROUGH CITÉ SOLEIL, the largest slum in the Western Hemisphere located in Haiti, one of the poorest places on Earth. Trash littered the streets and dirty stagnant rainwater was often used as latrines. The sun pulsated directly overhead, bleaching the blue sky to a blinding white. Sweat droplets raced down my spine and pooled at my lower back. Children dressed in rags – or for some, in nothing at all – played a spirited game of soccer with a half-inflated ball. I snapped a picture of a group of rambunctious kids, only to have eager young hands grab at my camera to see the image captured on my screen.

The novelty of the reproduction faded and most darted off between the shanty houses. One remained, diligently pointing at each face on the screen, as if ticking them off in his head. He stopped at the last one. His own. He let out a burst of pure, innocent, giggling glee and scampered off. Alone, I realized that for people who have next to nothing, a mirror is an unattainable luxury. This child only met his reflection by process of elimination. For he knew which ones were his friends and which one was the stranger.

I was struck dumb. For I never realized a person could walk through life without knowing his own physical self. But photography can change that. It lets a child see himself & his world through different eyes. By learning tangible skills & creating new avenues of self-expression, he can contribute to his life & his community.

From that moment View Finder Workshops were born. They were born to put the camera into the hands of children who have never had a lens through which to objectively view or portray the world in which they live. Children love taking photographs, and especially  love taking, and seeing photos of themselves. These are not children growing up in a “selfie” obsessed culture, but kids who may not have ever even seen a mirror image of themselves.  To put a camera in their hands proves liberating and empowering in a way that is hard to imagine, until you witness the pure joy on their faces when they see the images that they capture.

Photography as a visual medium provides a creative expression and ability to both view, and share a perspective from each child’s personal lens. And there is nothing like viewing the world through the eyes of a child.

The results of last January’s workshop in Haiti in collaboration with Respire Haiti, brought fresh views to the children of Gressier, Haiti who had been serving as restaveks (children enslaved as domestic servants), orphans & other vulnerable children. The images captured were often stark and beautiful.  The photos were then exhibited in September in an LA gallery show in Santa Monica where gallery patrons were able to view the results of what the children were able to capture with a camera in their hands. A few of the kid’s prints even sold!

Next the Viewfinder Workshop is gearing up for a workshop in Kenya This fall, where they will be introducing photography to 40 students enrolled at their new school in the Lenana slum, in the country’s capital, in a program that they hope to make a sustainable curiculum.  These programs need support to become sustainable, and this is where you can come in. You can like View Finder on Facebook , follow on Twitter , and/or make a donation to help other children to tell their story through images. You may just be the one to benefit from the enchanting worlds they share. 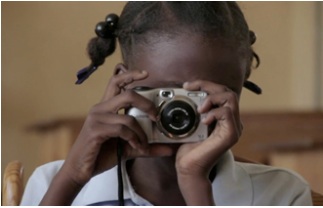 Have you ever put the camera in your own kids hands to see what they come up with?

This is an original post written for World Moms Blog by Elizabeth Atalay of documama.org.

*All photos credited to the View Finder Workshop website.