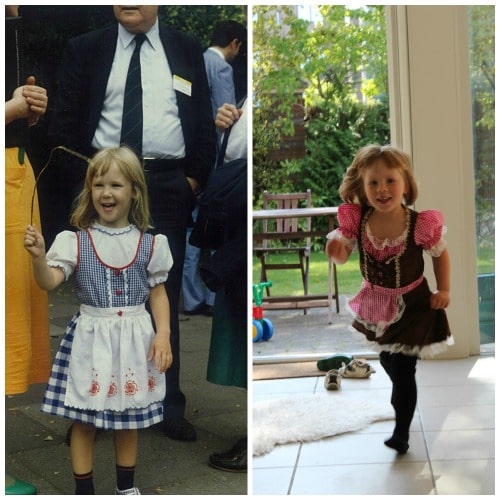 NETHERLANDS: My Child is Not Me 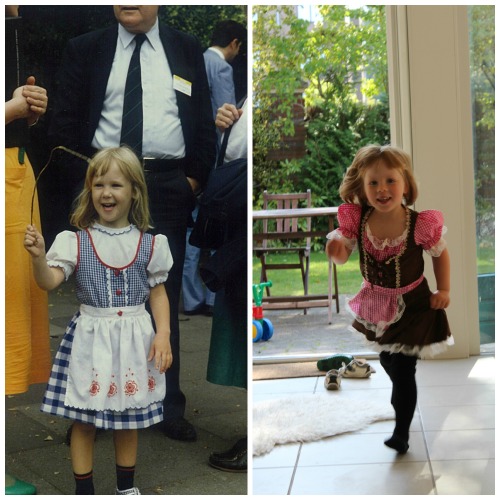 Left: The author, Olga Mecking, when she was growing up in Germany. Right: Olga’s daughter today in the Netherlands.

Sometimes, I find myself rediscovering simple truths about life in general and parenting in particular. My latest epiphany is this: “My child is not me.”

On the contrary to all the books and articles out there that tell us that we will grow into our parents, I don’t think this is the case. I think that while our parents influence our lives, we’re still separate individuals with our own thoughts, ideas and opinions.

And never has this simple truth rung more true to me than it has when my eldest daughter started school. I’ve been very worried about sending her to school at the tender age of four. I thought back to my old school days and worried and worried. And worried some more because my experiences weren’t all that great.

But this is when I realized: my child is not me! Pretty much everything about her will be different.

I was born and raised in communist Poland and went to school shortly before Communism fell. As much as I love my country, going to school in these times wasn’t so great.

We had to learn everything by heart. Language teachers weren’t too good. Classes were huge and the teachers were strict, even to the point of giving bad grades for pretty much anything. Nobody knew anything about bilingualism, and I was even lucky to have German classes offered at my school, as bad as they were.

She goes to school in a modern, Western country and has been speaking 3 languages from birth. Her teacher is amazing and lets the children play a lot. They go outside for recess and learn letters and numbers, and they even went on a school trip. In my daughter’s school, it is normal to speak two or more languages.

As a child, I was shy and timid. My idea of a good day was, and still is, to stay at home and read a book. School proved to be too much for me at times: too loud, too big. On the other hand, I was often told to sit still, be organized, and listen when all I really wanted to do was run around.

She seems to be more of an extrovert than I ever was. She could be outside all the time, playing, jumping, swinging, playing with other children; and, she seems to enjoy school.

I even often receive photos from her teachers. Guess who of all the children in the pictures has the biggest smile? My blond beautiful daughter.

When I went to school, we were taught about computers, but seldom used them for school. We were told that learning is hard work and were given grades for our work, even for our paintings. After school, I totally stopped painting.

She thinks learning is fun and can use all the great apps for learning, and she has a great selection of books in all the languages that she’s learning. She loves getting her hands dirty with paint and uses them to paint on a large piece of paper. She paints the funniest creatures and people, and she gives them funny names.

My daughter and I both have straight blond hair. Many people tell me she looks like me. I think I have an idea who she got her willpower and stubbornness from, but my child, she’s not completely me.

This is an original post to World Moms Blog by Olga Mecking in the Netherlands.