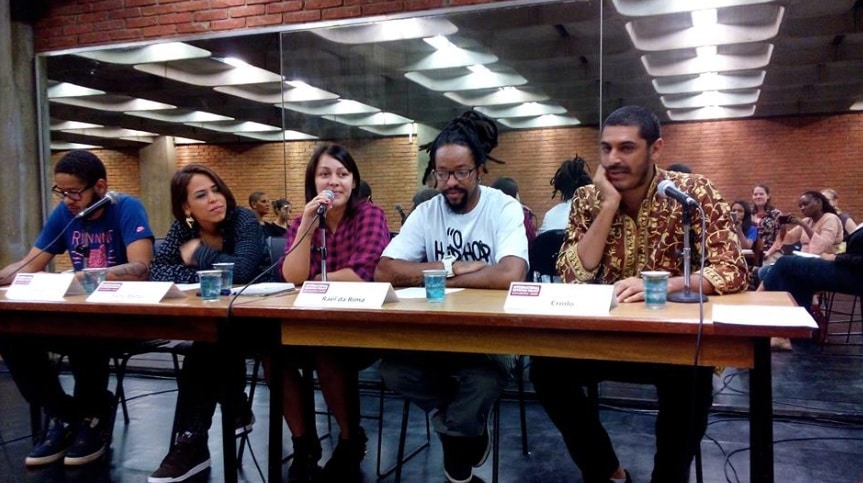 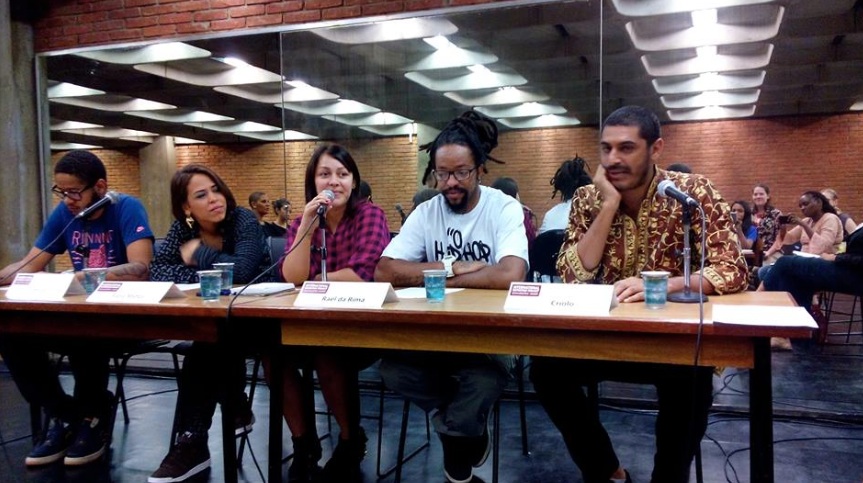 Our visit to Sao Paulo with The International Reporting Project was coming to a close.   After a very hectic day of Community heath visits and chatting with doctors, nurses, and community health workers, we just had to do something very cool. And what nicer thing than to rap our way into it?

We met the awesome International acclaimed Brazilian rap group at Centro Cultural Sao Paulo, and it was a great honor to be in their presence.

In the 1990s a musical style known as rap consciencia (socially conscious rap) originated in Brazil. These days it is making huge waves and improving the lives of people by making them socially conscious of their choices, their lifestyles, rights, issues, and gently coaxes them to dream of things which generally are taboo to dream about, for the Afro-Brazilian ethnicity.

Criolo was 11 years old when he started writing lyrics and now he has chart busters in London, New York and Paris. At the tender age of 11 he wrote about social issues. Social inequality is a major problem in Brazil. There is still prejudice across Brazil.

Criolo said, “there are so many ways to live. To wake up, to eat, to get to work and then get some money and then to eat again, is one way. If that is to live, it means people sell themselves for some food and money. That is just a process. Stop it. Live life. Let us talk about ourselves, our passions and aspirations and our joys.”

Rael da Rima was 11 when his music band used to talk about social injustice, racism, and equality to all. He talked a little bit about his personal life, and how rap music changed his life, and the lives of people living around him.

He said, “I give you an analogy for the social inequalities in Sao Paulo. Some people use this mineral water (indicating the drinking water on the table) to wash their BMW cars, and yet some do not have access to clean drinking water. Sao Paulo is a city of extreme contrasts.  I sing so that people consciously become aware of their own lives and strive to improve it.”

Rael singing of his passion for rap music:

Emicida says, “When I was young, to get into college was not something youngsters would think about. Just to let the day go by was an accomplishment. Nowadays when I walk through the favela(slum) I grew up in, I am so happy to see the youngsters talking about their dreams of being in college and to get a ‘real’ job. When slavery was abolished, it was both a curse and boon. A curse because people were pushed into poverty and violence with no support system, a lot of confusion, and no real understanding of what was happening in society or the political and economic scenario of the country. My rap is to inspire people to talk about their dreams, how to get out of social inequalities and to be truly free. In everyone there is a human being and I wish for each one to know it. Through rap music, the magic of communication is established, and people are inspired to know themselves as such.”

Flora Matos was 18 when she decided to move to Sao Paulo from Brasilia. She sings so people are free of sexual prejudice. She says her music always speaks of love – love for all kinds of people – love for humanity as a whole and breaking anything which could make people hate each other.

Flora Matos singing of love – love for people, passions, and love for all of humanity

These musicians and others like them are not people who sign on big labels or crave all of the fame and popularity. They just want justice, recognition of the minorities as human beings, and some peace for their community. And they do it through rap music.

They sing about poverty, prejudice, abuses of various types, about the blacks and whites in Brazil, and the classes. Flora said, all her numbers are characterized by experiences, either her own, a friends or someone she knows about. So this idea of communication which Emicida says – that is the magical bond – is established. This communication through music is not just passing of information or ideas or activism – it is an expression to bond humanity, a gentle prod to awake, and be aware. So through the actual performance the listeners carry back this vital element of being part of the movement.

So even though they do not directly change anything, or may not be able to give statistics and figures, they change attitudes, and invest in developing agents of change – which is a very vital thing to forge a developing society, progressing towards success.

I am not a big fan of music, not even Indian music, but that day I promised Criolo I would look him up on Youtube. He was mildly surprised to know that I came for a meeting with rap artists when I was not into music at all. I explained that it was because I learnt they worked for social causes through music, and I was interested in that. He wished me luck and said he would look up World Moms Blog too and we parted.

Just for fun, I also recorded some street musicians the other day in Sao Paulo’s Avenida Paulista, one of the poshest locality in Sao Paulo. I cant help sharing the below one.

Purnima Ramakrishnan is a fellow of Journalism with the International Reporting Project (IRP), reporting from Sao Paulo, Brazil. Follow on Twitter at #BrazilMDGs