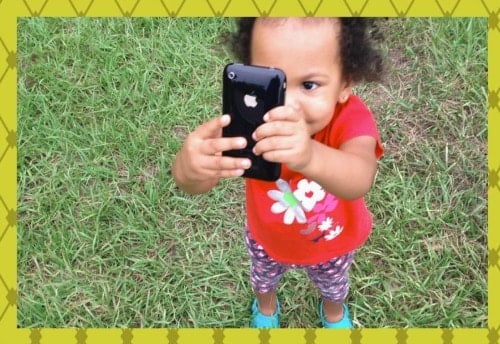 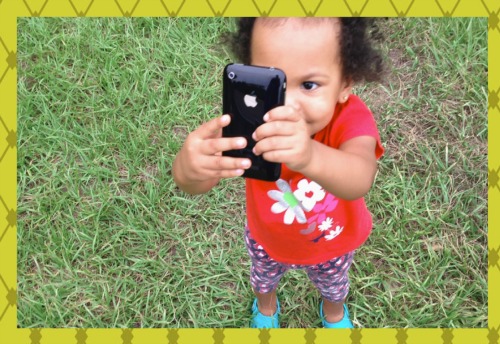 “Yes please, yes please, yes pleeeeease!” is what I hear almost every time my toddler sees or hears my phone. If she does not get it, she isn’t too happy. She may move on to playing with something else, but sometimes comes back pointing at where she last saw my phone, and says “yes please!” again.

I got said phone about a year ago and it’s an iPhone, so let’s call it Apple. At first, my baby (Sophia) was not interested in playing with Apple, albeit being awed by lights emanating from it and the sounds it would make. This year Apple became something more appealing. Sophia’s little fingers understood how hard and how often to push different buttons to make Siri speak, see all the active apps, make the screen negative, move apps (some moves ended up being deletions), and select apps as well.

Watching her learn by literally being hands-on, has been interesting and challenging at the same time: Should I let my one year old play with Apple? Is this going to make her not notice the natural world around her? Will she want to only play with electronic devices? Can I make this activity a part of a balanced learning plan?

As I watch her, and we introduce various activities as well as keep old ones going, little Sophia answers my questions fairly directly. Sophia would like to play with Apple more often than we let her, but she does spend her time doing many other things. She asks to get her shoes and hat, and blow bubbles outside. She LOVES her night-time book and wants to flip through it whenever she sees it. Sophia sits in her ‘reading’ box with a few books, or plays songs she likes on a little piano grandpops got her (or the big piano if she wants to play with one of us). There is some TV watching, coloring (on various surfaces…..), definitely a lot of eating, and running around the house.

When she sees Apple at a time I believe she could play on it, I give it to her and she goes into Sophia’s Apple world for a while. She has a selection of videos that she finds amidst a sea of 40 or so, and plays them over and over. She acts them out and speaks/signs baby language along any songs her cousins sing; cousins she hasn’t yet met. She sees her big sister on video and calls out “Sissie!!!” with a smile on her face.

After moving and opening a bunch of non-baby apps like WordPress, Twitter, Girl Up and others, Sophia leaves a few photos of walls and parts of our faces for my reviewing, opens her EduKitchen, her Italian app that has animals making amazing sounds, and a music app. She understands these apps will have a window pop up with an X on the top right side and through time she has learned not to continuously touch the screen, but to wait for that window, X out of it and then play her games. If she goes too fast and the app store comes up she will either start the app anew, or she will find one of us tall people to fix the problem.

Sophia doesn’t quite understand how to work a laptop keyboard and mouse, however. I think about this as I learned to work a typewriter, then a desktop PC. It seems like this learning experience is backward, as  touch-screen Apple is really a handheld computer with a phone app on it. Is it really backward, though? Or is it a part of the 21st century?

At the end of the day, I believe Sophia should play with Apple because Apple is a part of 2014. For her to be at least on par with her peers, Sophia will need to know how to use certain devices. Even better than that, would be for her to have an extensive understanding of how devices like Apple work, that she may create solutions to world problems.

If I lose a few apps on the way, iCloud has my back. If I don’t remember what the deleted apps were, I must have not needed them anyways. Meanwhile I am continually fascinated by the adaptation of the human brain for things that we almost only talked about as sci-fiction fifteen years ago.

What role does technology play in your household?  How do you handle the use of technology by children in your home?