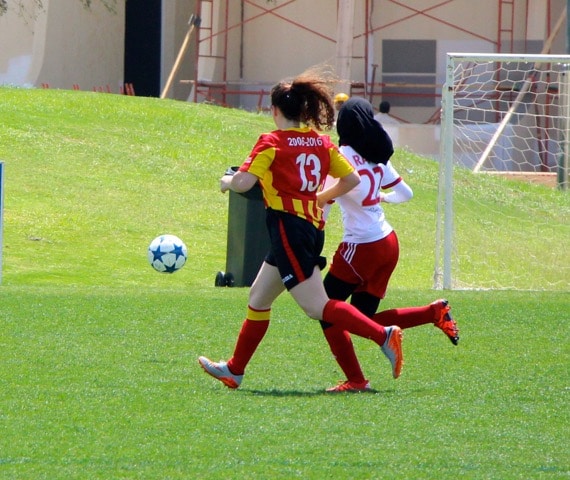 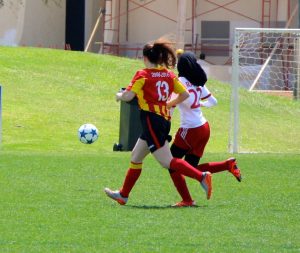 The other day I went to my teenage son’s soccer tournament, and because his game was delayed, I watched a girls’ match finish on the other field. Actually, thanks to the British history in Abu Dhabi, I should say that I went to the “football fixture,” watched the girls play “on the other pitch,” and then at the end of the day took my son to the sports store so he could buy a new pair of “boots” (not cleats). Who knew when we moved here five years ago that one of the ways we would adapt is learning to speak a different version of our native tongue?

As I watched the girls’ match, two girls maneuvered the ball across the pitch, their teammates shrieking encouragement. One girl—a headscarf covering her hair, and leggings under her athletic shorts—passed the ball to her teammate, whose long ponytail was streaked light blue. They brought the ball down the pitch—passed left, passed right—and then Ponytail shot for the goal. The ball bounced off a goal post, looked like it was going to go wide, and then sank into the back of the net past the goalie’s outstretched hands.

“Nice shot,” murmured my son. “Really good pass, too.” Neither of us knew the girls who were playing, but his comment made me happy nevertheless. As the mother of sons, I collect “girl power” moments like this one to remind my sons that they do not have the market cornered on sports excellence. Now that he’d seen for himself, I wouldn’t have to risk being Tiresome Mom by pointing out that those were girls playing pretty kick-ass football.

It’s easy to see in this little episode a lesson about hijab not being the symbol of oppression that so many non-Muslims are quick to assume it is. This girl left her opponents in the dust as she raced down the field, and she pounded her thighs in elation when the ball went into the net. Her war whoop as she ran to the sidelines to celebrate with her teammates would be recognized anywhere as the screech of a happy athlete.

But that’s not really the point. The point has to do with the fact that my fifteen-year-old son didn’t notice the headscarf or the leggings—or the blue ponytail, for that matter—he noticed the football. He noticed what the girls were doing, not what they looked like. As my son moves closer to manhood, a process that seems to be unfolding faster and faster despite my attempts to keep him “my boy” as long as I can, I wonder if my feminist politics have rubbed off: will he become a man who sees what women can do rather than how they look or what they’re wearing?

Isn’t that the question we ask ourselves as our children—those firm little packages of flesh that seemed at one point soldered to our hips—move out into the world: we want to know if our lessons have sunk in, if they’ve been listening even as they seem glued to the Snapchat world in their phones. Does my darling son talk about girls as “hotties” when he’s with his buddies; does he chime in when the conversation turns to which girl has the best body and why?

I don’t know. All I can know is that the other day, what he saw was two people playing great football.

Who knows. Maybe if enough children grow up appreciating what people can do, rather than what they look like or what they do (or don’t) wear on their heads, the world might become a more level playing pitch.

How do you create awareness about gender equality for your children?